Just last week, my ds106 students applied Roger Ebert’s How to Read Movies for their weekly assignment. One of my students was first in my network to share the sad news that Ebert passed away today

What a better way to honor his contributions that a ds106 assignment (well there are likely much better ways), but here you go, Thumbs Up For Ebert:

Just a week after the Spring 2013 ds106 class applied Roger Ebert’s How to Read a Movie to analyze scenes of movies, he went on to that big movie theater in the sky.

For this assignment, create a tribute to Ebert’s love of movies; but do more than just make a montage of clips of him. Put him in context with film characters, musicians, or place him inside one of the movies he loved or hated. Or mash him up, Do anything to show some respect for Ebert’s devotion to not only appreciating film but teaching others.

Ironically, I saw today also a note that today marked 100 years since blues legend McKinley Morganfield, aka Muddy Waters, was born. I looked for a connection between the two, and ended up with a mix of “Got My Mojo Working” and some clips of Ebert sparring with Gene Siskel:

I started with the song list for Muddy Waters, found a few in YouTube, landing eventually on a live 1973 performance of Got My Mojo Working– “Mojo” is such a gritty and suggestive word, coming from an African custom of a magic charm represented by objects in a bag — ” it is said to drive away evil spirits, keep good luck in the household, manipulate a fortune, and lure and persuade lovers.”

The song was a huge hit for Muddy Waters in the mid 1950s, listed in the top 500 all time songs by Rolling Stone, and has a long list of covers- though it was written by Preston Foster and originally recorded by Ann Cole and there was some copyright spats there. The courts stepped in and said Mojo was un-copyrightable:

MOJO is a commonplace part of the rhetoric of the culture of a substantial portion of the American people. As a figure of speech, the concept of having, or not having, one’s MOJO working is not something in which any one person could assert originality, or establish a proprietary right.

Kind of interesting to think about judges debating the merits of “one’s MOJO working”.

The song is more of a reference to the lack of the Mojo’s ability to work over the charm of a lover, but I thought of the way Ebert and Siskel went at each other, when they disagreed. I found many clips of this, and used ones from a set of outtakes and a bit of their interchange when they reviewed Jaws.

In iMovie, I dropped the Ebert clips on top of the music track, with the advanced features on using the Cutaway edit, essentially adding those clips on a new track. I edited the audio properties on these clips to duck other audio. And I added a few title bits, using the same effect (soft edge) and font. 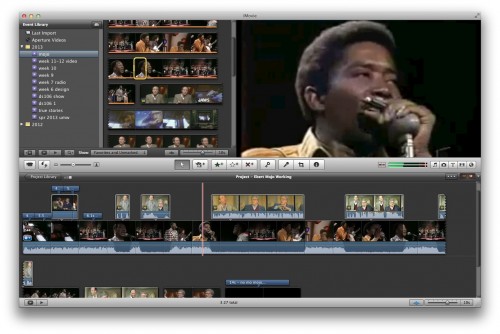 For the last title sequence, I grabbed again the first 15 seconds of the video, then detached the audio to slide under the closing title sequence (and deleted the video part of the music). The audio properties were edited for a manual 2 second fadeout.

Gonna miss that mojo all around.