This is part 1 of hopefully two posts about ds106 radio, the open microphone internet radio station spawned for ds106 (in case you do not know {how could you not} its the Open Digital Storytelling course) in January 2011. The next post will be some info on how to program the radio shows.

But I was also obsessing over the way people find information. You see, we have this awesome URL http://ds106rad.io/index.php but all that displayed was the log on for the Airtime software that runs the station. To cut to the chase, this now will display a widget with the current things playing and a link to more information: 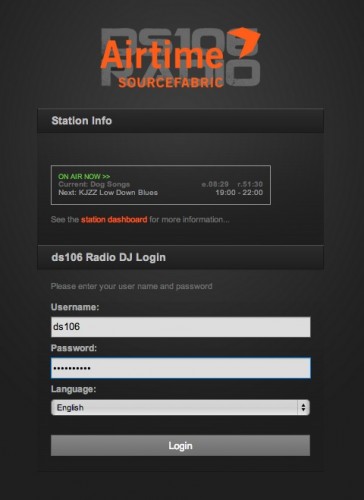 But that is the end of the story. Grant Potter sent me the server coordinates, and I thought I could simply move the code that in the main index.php file on the web directory to something like login.php, allowing me to put a more information home page, but I could doing that broke all of the widgets and who knows what else. There is code in the main index.php that the software seems to need there.

So I instead put maybe what would have been a nice landing page at http://ds106rad.io/dashboard 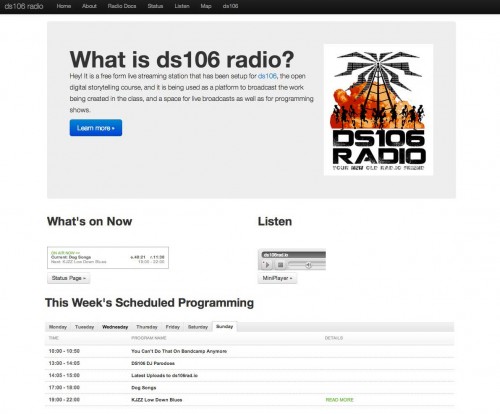 It’s just a starting point, but includes info and links to relevant station info, plus widgets to show the current song/item, the weekly calendar, and the widget to listen in. Ultimately we ought to add some of the info that is scattered in the google doc about how to broadcast, how to listen, etc/

This was my first play with the twitter Bootstrap framework and I have to say I really love it, I just scraped the surface, but tried to do something that uses the responsive design features so it renders on mobile (the weekly program schedule thing is a problem since it is fixed width).

The new dashboard is a link off the front page now, which ideally should have the player widget there (hmmm, will require some hijinks). It was a lot of digging to find where Airtime renders the layout, and then some teasing the CSS to add some more features.

Oh, while I was in there, I found out where the Icecast Server Status page is generated, so added a more descriptive header, logo, and a link to the dashboard 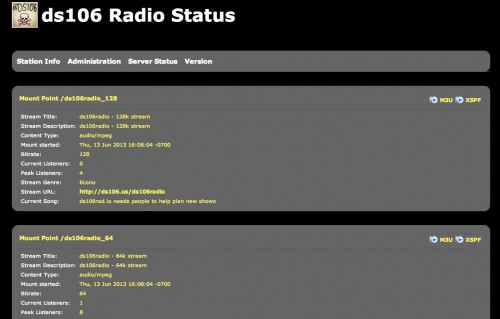 This is not all that significant, but I wanted to make it a little more informative at this site. If you have suggestions or want to help add to the site, lemme know. I just wanted to give it a boost.

Now, in the next post, I hope to give some pointers on what is more key, programming content that plays on the station when no one is broadcasting live. Because Dead Air Is Not Our Friend.

PS- something I did messed up the server so the primary URL redirects to a dead end, so to get to the sign in, use http://ds106rad.io/index.php rather than just http://ds106rad.io — hoping Grant can fix that (might need a server restart?)