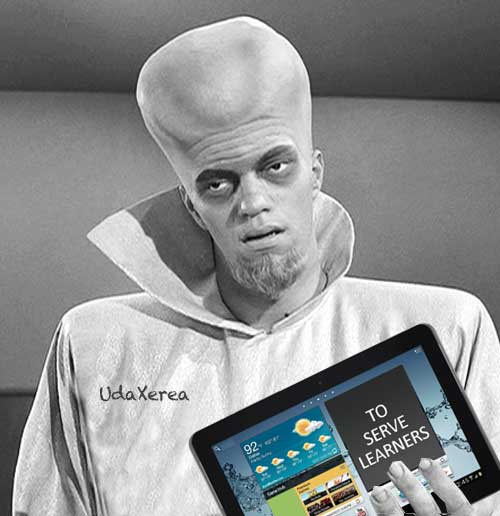 Last week the third of a 3 week cross country trip by train. I was not planning to be part of a ds106 radio show project for the summer 2013 5 week madcap section Jim is teaching.

But this idea got in my head, in that ds106 way that I know I will put aside almost everything else (eating, sleeping, doing productive so called work) until I got it out of my system.

Submitted for your approval, To Serve Learners, done in about 2 days with audio assists from Giulia Forsythe, Brian Short, Rochelle Lockridge, Brian Bennett, and Jim Groom. This was edited completely during the 32 hour train trip from Chicago to Flagstaff, AZ.

My first thought was a redo of the William Shatner freakout Nightmare at 20,000 Ft recast for my trip by railroad, but got lost on figuring out what the monster would be doing to the train from the outside. Sometimes you have to let the idea simmer.

The big idea came out of the blue (actually when I was looking for episode scripts), and To Serve Man always ranked as my one of my all time episodes, for the hook that you should have seen coming but did not. But it also plays into our hopes and expectations for magic solutions to complex problems… maybe some friendly 9 foot tall creepy headed aliens might help? For just their altruistic spirit? Yeah, just walk onto that spaceship for the promise of a better planet.

I found a full script online, and set about re-writing in a Google Doc, with the idea I would invite other open participants to help write and record (you can find this script and our working notes).

And the premise, my one, was to change it up so the aliens were not from outer space, but from outside education:

The aliens in this case are from Silicon Valley and the galaxy of Business Innovation, the UdaXerians, and they arrive unexpectedly at an EDUCAUSE conference with all the answers to educational problems, via their superior technology. Educators are enthralled with the massive potential and cost savings, and are eager to accept the Udaxerians pledge to serve learners everywhere, for free. The skeptical are ignored, but one woman finds a tablet device left behind, and is able to hack to to find out what the “To Serve Learners” app is– the real thing the Udaxerians are seeking- what powers their systems are the minds and personal data of people crammed full of MOOC courses. But most of education blindly goes aboard the MOOC ship, with promises of a Perfect Pedgagy at the San Jose headquarters, and no one can hear her cry– “IT’S A COOKBOOK”

For reference, the original version

Working at Dr Garcia’s learning center at Oakton Community College, I found it took way longer to write the script– because as I started comparing the script to the video, there were significant differences, first noted in Serling’s opening and closing remarks, but entire sections were changed. I assume the script is a first draft.

So it ended up talking maybe 3 or four hours of transcribing/re-writing. It was fun, though I wish I had found Draft a cool new web writing all that allows you to embed a video/audio and transcribe in the same space.