What feels like a month later, I’m still back blogging some of my experience at Mozfest in London. My ears perked up when someone mentioned something about SourceFabric being at Mozfest.

@grantpotter I was told the folks from Airtime are sponsoring the #Mozfest beer tonight, hope to find em to talk about #ds106radio

Why? Because they are the folks that produce Airtime the open source software we use to manage ds106 Radio. I spoke to a few of the folks at the opening night Science Fair, especially Daniel James who works on the Airtime documentation and community.

I shared our challenges in having a way to easily signify when a live broadcast is one, and he showed me where in our software is the API we could call, and where in the airtime code this is generated. I got the idea that we could figure out a way to hack this in, and he said they would be glad to help (this is on my task list!)

The next day, I came back with some more questions, and they asked me to do an interview with Daniel, which he broadcast live in their station and I broadcast at the same time on ds106 radio. 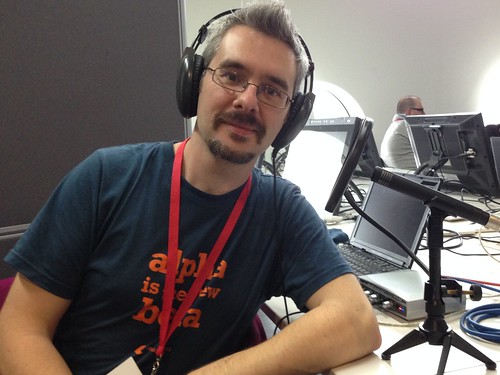 I did a post interview with Daniel, but alas, using Papaya, did not pre-think a way to record.

At the time unconnected, I had seen the first night a woman walking around with a jacket that appeared have lights on the back that were micro-computer controlled: 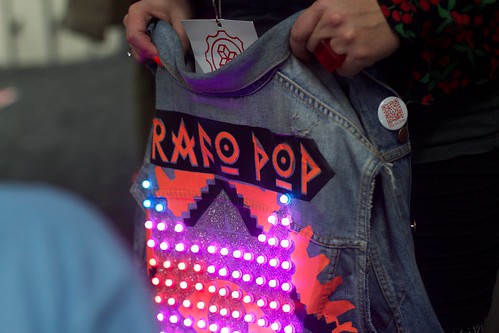 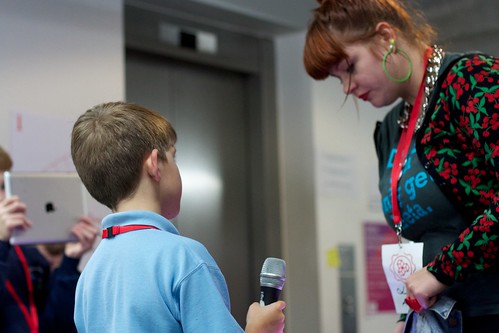 The jacket not only had an Arduino controller to make the lights flashed, but she also had in the jacket a wireless receiver, and the idea was that if there was an internet connection, the jacket could connect to an Airtime radio station, and the patterns of the lights would be controlled by what was playing on the streaming radio. It was as she suggested, a way to visualize music.

So I tracked Lisa down later and managed to record a short interview where she explained more about the technology (it comes from a group that makes lights for bicyclers in Berlin where she lives, so they are more visible). The LED bulbs are big, and also water proof, and low temperature.

The Airtime folks were very interested in what we are doing with ds106 Radio (well it is pretty darn interesting, right?). I offered to write up some info about it, and have not gotten around to doing that. There is some general info on the ds106 site including

as well as a nice video created by Wes Fryer

But you know what? There is a lot of history there, going back to the original @jimgroom tweet that set things in motion, and all of the special things that have happened and were shared. I have an idea, if others will participate, to start an open Google Doc with as much history as I can put together, and tap people to help fill it out.

What do you think? Anyone game?