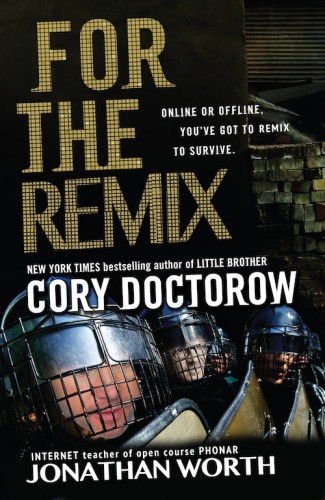 If you paid very close, detailed (ahem) attention to the Triple Dog Dare — this is RULE 2 for the current ds106 Headless open course activity of remix– it’s time to break out for creativity in a big way, and remix some photos of author Cory Doctorow.

He’s given us his blessing (e.g. boing boing permission). All of the information, details, photos to remix, exmaples, instructions are on the site I cobbled together from Jonathan Worth’s idea. Here, let him say it.

Jonathan’s phonar students are on to it now. Hey are we going to let those phonar kids out remix the mighty ds106? (cheap shot appeal to competition) (I’ll resort to any tactic to draw you out of what else you spend time on beside ds106).

A few words about the site– when Jonathan and I planned this last Spring, we wondered about thousands of Cory fans, Boing Boing readers descending on a site, so I suggested we hang it on a WordPress.com site and let them handle the bandwidth. It was a decent challenge working with the limits there, and that was not much of an issue– I am using Modularity Lite, one of the Graphpaper Press themes (I love them). The galleries you get for displaying images are nicely done, they can be randomized (seen on the remix gallery and the page that shows Cory’s book covers).

The front page is a bit of a trick- I am using the theme feature to have a front teaser, and to make space to show the background image, I have snuck in a transparent PNG image (it’s like the old invisible GIF trick!) 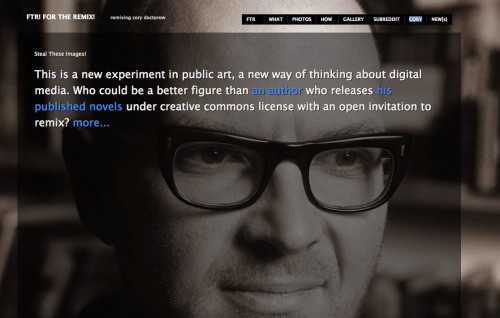 When I ran this for my class before, i had them submit remixes via a Google form; when we went public, I was leery of managing the form submissions, and suggested having all submissions be done via a subreddit. When I met with Jonathan 2 weeks ago, we decided to go back to a form, as we wanted to capture a remix trail (when people remixed a remix) and to ask for a statement about how they define their work as a remix. To be honest, the response has not been that overwhelming (ahem), so we are good for now with form input. I did throw in a second sheet to the google form response sheet, to do some tricks to compose the right HTNL so adding to the gallery and the text list of all submissions a cut and paste step.

We left the subreddit up as a place where people could optionally add their remixes and we can run a popular vote – hey that means you, go to the subreddit and upvote some remixes! 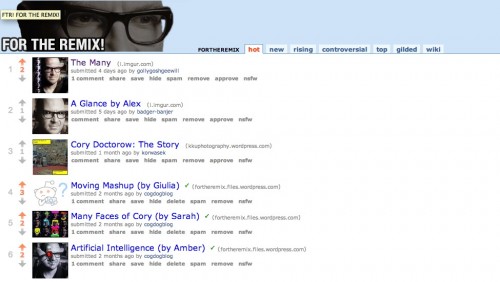 I had my UMW students do this last Spring as a remix assignment for ds106 and you can find their work as well as some of the open participants sprinkled in the FTR (For the Remix) (Get it?) Gallery:

Need to see what was remixed already?

Artificial Intelligence remixed by Amber May

Ripping Up a Shredder head remixed by johnjohnston

The Many remixed by gollygoshgeewill

The Legend of Sharing remixed by Watkins

Mysterious and Colorful remixed by Stefanie

That’s mine! How Do You Think Yoda Got So Wise? remixed by Alan Levine

Again, see all of the remixes at http://fortheremix.wordpress.com/remixes/

It’s not that complex. Here’s what to do:

C’mon, take care of Rule 2– you don’t want to have to shave your head, do you?