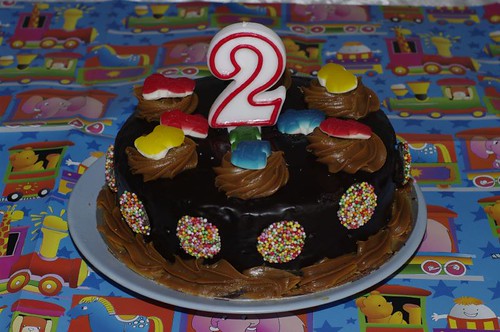 Two years ago today the ds106 Daily Create was launched with its first challenge, TDC1, “Create a Photograph that features a repeating pattern”. In honor of that, this is one of the rare times we repeat the same prompt, for TDC731: 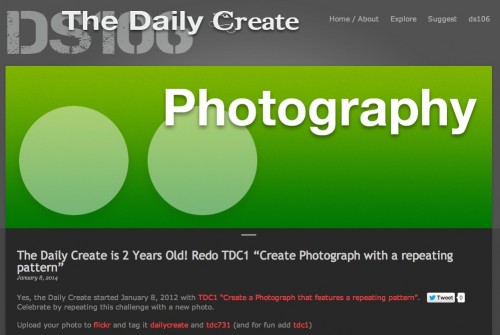 We’ve not missed a day in that stretch, a run of 730 creative challenges meant to help you flex those creative muscles. The idea for this site grew out of our experience with The Daily Shoot, a site created by pro photographers Duncan Davidson and Mike Clark. While I had been doing my own (and still do) daily photographs, the power of a photographic prompt gave me something to look for everyday, and often led me to try new techniques.

We used the Daily Shoot in the first years of ds106 when we worked on visual techniques. Our UMW students always got a lot out of the photo prompts.

Sadly the Daily Shoot shut down Oct 6, 2011– the sote does not even work but we can find the past assignments via the Internet Archive. The last Daily Shoot was Assignment 690 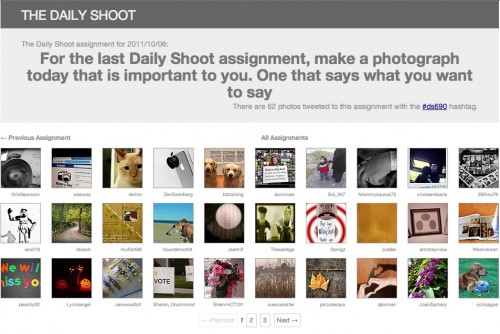 In late 2011 a number of us around ds106 speculated how we could build our own version of the Daily Shoot, and even expand it to other media types besides photos. Right around the end of the year I was mulling over how to build it in WordPress, but then I was getting ready to drive across the country to start my work at UMW.

In the meantime, the clever Tim Owens managed to build the current Daily Create Site without much custom coding at all, using the media embed capabilities of flickr for images, youtube for video, and SoundCLoud for audio. It uses the same Salutation theme as the main ds106 site.

Once I started teaching my first ds106 class in the Spring of 2012, I took over the management of the site, making sure we had enough daily creates queued up (at some point in June or July, I filled them out to the end of the year as we had plans to make a calendar for the ds106 Kick Starter) (oops).

And important part of the system is that our students and community can submit ideas for future daily creates. That uses a Gravity Form to create a draft, and then we can look at the drafts and schedule them for a future post (they are published at 10:00am EST every day).

I also created some back end tools to make the creation and management of the Daily Create’s somewhat more automated, made archive templates so you could access, say all of the Audio Daily Creates, a link to generate a random one, and built the custom post type and scripts to manage the Writing Daily Creates.

I am a bit addicted to keeping this going. And our students always respond well to it… at least til about 3/4 the way through a class. It’s also a good low threshold way for people to be part of ds106.

Going forward I hope to retool the way the site works, actually make it more like the original Daily Shoot approach where people submit their work by tweeting a link to a given account, and including a hash tag to identify the assignment. We moved away from it because of the challenges of polling the twitter API, for a simpler approach that relied on tags.

We run into a few limitations with the tagging:

And it is actually limiting to make people use flickr for images, when images could really be shared via any URL… Plus I have dreams of making this a wordpress general template that people could modify to make a Daily Challenge for any subject, so the organization around media type is artificial.

So I hope in the next few weeks to build out the site so people could submit something by tweeting a URL to @ds106dc.

So go find a repeating pattern for today’s Daily Create. Tag it tdc731 in flickr and toss in the same tag from two years ago, tdc1, so the image can go to both places.