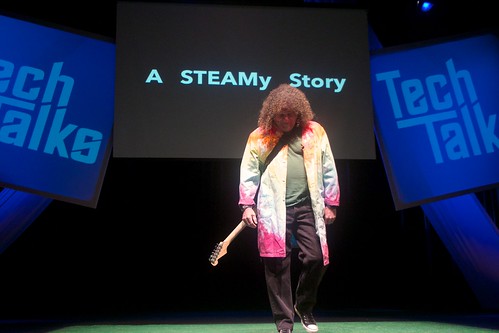 As part of my fellowship for the OER Research Hub at the Open University I am sharing these excerpts from conversations about OER use/creation recorded in April 2014 with faculty at the Maricopa Community Colleges. This is the third of the six that should/will be completed

In January 2014 David Weaver retired Physics after teaching Physics 30+ years in the Maricopa system, most of it at Chandler-Gilbert Community College. Retired does not mean much has lessened for him; he continues to teach online classes and to actively pursue his passionate interest in project based teaching. David was perhaps the first faculty member I met when I started in Maricopa as in instructional technologist in 1992, and remains one of the most innovative and thoughtful teachers I have known.

He started as computer science major but at East Texas State he notes that the program was in the Business School. One of his first classes was in FORTRAN, a scientific language. He got caught up in Physics where computers were just starting to be applied to instrumentation of experiments, when In graduate school the first microprocessors came out. The Computer Science department did not have interest in these “little toys”

If if did not fill a room they did not consider it a real computer.

It was his experience with instrumentation in physics got started teaching in the department in Maricopa at Scottsdale Community College, which was just starting program focus in it at the time.

Interactive video was emerging then. For his masters thesis David was experimenting with boards in Apple IIes and he developed a training multimedia piece on Ohms Law.

When he got to Chandler Gilbert did not use much tech, but came a perfect storm, of which I was one part

David was truly one of those “heat seeker” faculty who I could just show some new technology, and he could see the potential and take off from there. In 1993-1994 he and his students put together what he thinks was the first educational physics web site in the world. It pre-dates the Internet Archive, so you have to take my word that there was a valid reason for that site to have a photo of Elvis meeting Richard Nixon.

Soon after, David went to workshop at Pikes Peak Community College where he learned about microcomputer based labs (“Workshop Physics“), what he considers his first introduction to OERs.

These “workbooks” were free that would lead students in a very experiential way, using computer interfaces that would collect real world data. I was an approach that asked nature how real physics worked, rather than reading a textbook on how physics worked.

When asked why do you keep trying new things David says a part of it is he does want to be bored himself in the classroom– “I want to stay engaged”. In the 1990s he looked into the body of knowledge of physics education research. What he took away is an understanding that students learn by doing, not by listening or by reading, and adopted a projects based approach to teaching.

He defines OERs as a way most of the other faculty I have talked to- with a basis in the common understanding of what a textbook provides. The textbook as the nexus of course, that students can show up for a course or not, could take notes or not, but as long as learners knew where in the textbook the test questions would be taken from.

OERs turn the experience away from that. As resources open means they are modifiable. “No textbook would fit me personally” but he I can go in and modify materials that are available, then I can make can make it fit the environment he knows should work for the students. For community college students the cost savings are significant, a physics textbook can cost $260.

If I can be frank the textbooks and a lot of the online homework resources, they are selected to make the teacher’s job easier– it’s not to enhance student learning.

David’s recent interests in OERs has been using vPython a visual programming language, developed originally by a undergraduate physics student at North Carolina State University. It allows you to program in objects that interact in 3d space and that obery the laws of physics. As a typical way David practices re-use, he saw it presented at conference where the presenter shared how he had an entire course based on this approach. David sought out the presenter and asked to re-use it, made his own modifications which led him down a path of programming that David had not explored before (he learns as he teaches which he can then teach).

David notes that he is starting to see more electronic resources available for reuse, such as ones from the PhET from the University of Colorado Boulder (Free online interactive sumulations).

“Some are sophisticated and neat, and some are just stupid and fun” such as John Travoltage 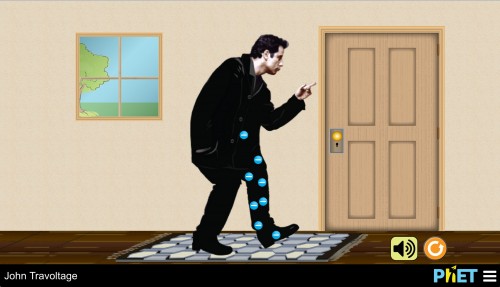 To simulate static electricity, you rub Travolta’s foot against a carpet and bring his finger near a door knob; you see the charges building up on his body until he gets a shock.

Another digital resource David uses and particaptes in is called ComPADRE — “a network of free online resource collections supporting faculty, students, and teachers in Physics and Astronomy Education”. He has been working with a group to do lab curriculum writing. They meet six times a year, and in each meeting they might produce produce new 10 labs.

David seems more what is now a critical mass of materials of sources like PHeTs and comPADRE that worthwhile to go in and look at:

David’s teaching is based on the concept and materials of “Spiral Physics” – because there are a certain number of principles he keeps spiraling through. His modifications (which he says were not trivial to do using Microsoft equation editor) the OER’s problem solving method does not match the way David prefers to teach. When asked about the amount of difficulty and effort to modify OERs, David says the time and effort to do this is comparable to what he must do to adopt a textbook:

In terms of measuring the impact, David shares that he stopped giving tests 15 years ago. His assessment includes 1-1 interviews with students to and reviewing what they produce for their project-based documents– e.g. their learning artifacts.

He notes that students he teachers will never take another physics course again; they take a one or two course terminal sequence. Therefore a primary measure for him is engagement. Typical retention rates in physics nationwide and in Maricopa are low (“it sucks”), typically 70% and often below 60%. David’s project based learning and leveraging of OERs have produced retention rates “in the high 80s or low 90s”.

He estimates he has taught over 5000 students in his career.

In using the spiral-based approach in his algebra-trig-based course, David can compare the types of problems students are able to solve with those that are at the back of most physics text books. He reports that the kinds of problems his students are solving are more. When they students go for tutoring from students who have taken the next higher level course (calculus based physics)– the tutors cannot help his students!

David’s sharing of his own materials is primarily through the workshops he leads in project based physics, going back to one I remember well, where his students were responsible for building robots that then had to compete in a “soccer war”. He also has shared training protocol he created for vPython .

He notes that a majority of his ideas have come out of events and workshops from the American Association of Physics Teachers.

A recent challenge David has taken on is teaching physics online. He recalls a conference discussion where faculty were complaining about administrative pressure to teach physics online. Most present agreed that it could not be done because “Students have to put their hands on equipment in labs to really understand physics”. He pushed back against this sanctity of the lab experience–

It struck me that most of the stuff in the physics lab students have never seen before, they will never see it again– it’s magic.

David has been impressed with the online free textbook offerings from OpenStax.

Their physics textbooks have everything that we have in the ones we ask students to pay for, and its free!

For physics teachers new to OERs David notes that most community college Physics departments are relatively small, so trying new approaches is not as difficult as in larger departments elsewhere.

David’s foundation is in his careful study of not just the body of knowledge of Physics as a discipline, but the teaching of Physics

We have 30 years of physics education research that have shown that the typical “drill and kill” approach does not teach people to think physics… At the heart of it we are scientists, so we should be open to evidence-based conversations and it is overwhelmingly clear that the way we learned physics is not the way to teach physics.

As it was on the first meeting David in 1992 on a bench at Mormon Lake, Arizona, talking to him about teaching is always inspirational.