The trails of distraction. If I worked for anyone else besides myself, I might get fired for my wanderings.

This all started at lunch time, I noticed I had about six oranges in my fridge, and that also I was out of orange juice. I thought I would take a few moments to squeeze them using this little plastic gizmo I had in my cabinet… except I could not find it.

Instead, I came across this antique one I had found and liberated from my Mom’s kitchen when we emptied out her house. 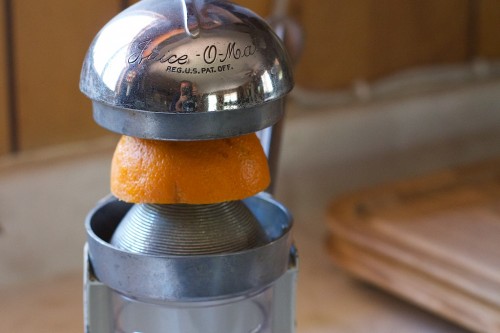 Wow, it worked much better than the hand powered plastic gizmo! The pressure applied to the handle, the clever grooved insert– it is so elegant. 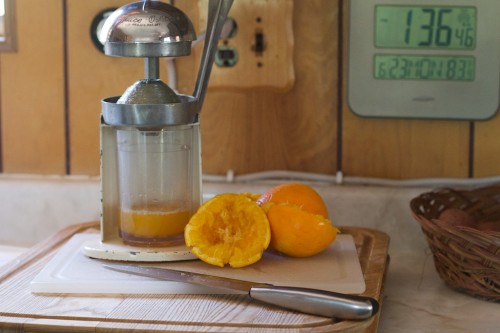 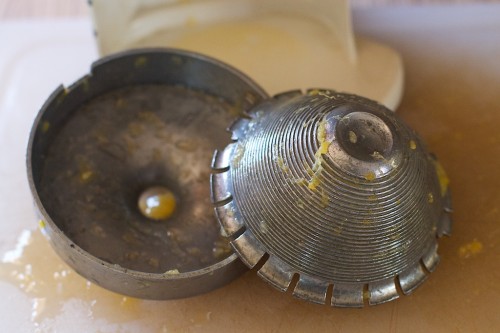 Yes, I spent 20 minutes squeezing 6 oranges into one cup of juice. But the feel of that metal appliance, and the design of it– am I turning into some kind of raving retronaut?

I got curious about the fancy engraved name in the top the Juice-O-Mat, and beneath “REG US PAT OFF” — Registered US Patent Office.

I found a version (many in fant) for sale on Ebay. No great rare item, with the condition on mine, I’d be lucky to get $20.

Someone there is selling print versions of the Patent Application ($12.99). Tricky, they truncated the patent number.

Then, I tipped the device over and found the full patent number! 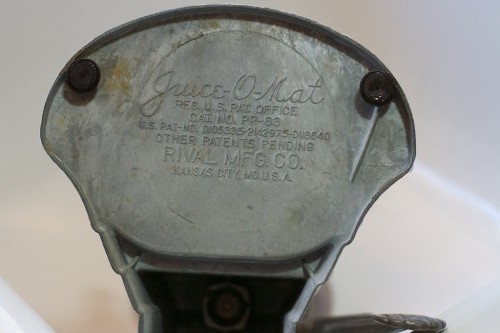 From there, with the full number, searching in the US Patent Office site was easy– Design Patent 105,335 for a Fruit Juicer filed July 20, 1937 by Joseph Majewski, Jr 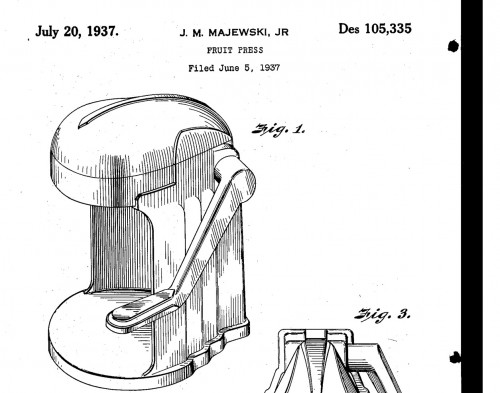 The Juice-O-Mat appears in a fascinating exhibit on American Streamlined Design: The World of Tomorrow 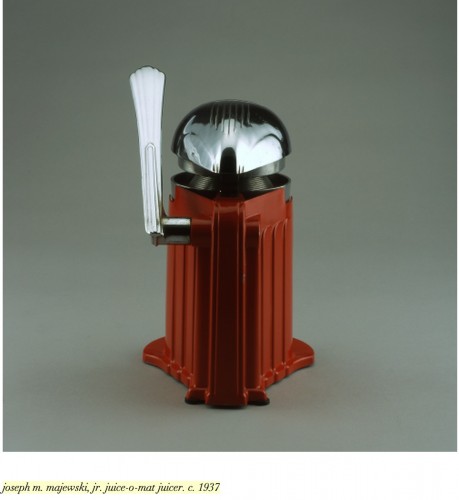 American Streamlined Design: The World of Tomorrow, focuses on a design era that emerged during the 1930s and 1940s, characterized by curving forms, and smooth, clean silhouettes. The style, which suggested speed and glamor, entered American design in the post-Depression years. It was widely applied in new forms of architecture, interior decoration and everyday household goods for the home and office.

But who was this Joseph Majewski Jr? Two years later (July 1939) he has a patent filed for an Ice Crusher and in April 1941 for a Drink Dispenser. From the Ice Crusher patent:

My invention relates to ice crushers, and more particularly to a device for crushing ice into small fragments for use in icing drinks, juleps, and ice bags.

One object of my invention is to provide a novel ice crusher adapted rapidly crush ice into small fragments.

Another object of my invention is to provide a device for crushing ice in which the fragment size may be controlled.

It’s pretty clear the intent. This whole world of patents was nicely summarized in education technology recently by Audrey Watters following a tweet by Mike Caulfield

One can easily lose days tracking out these trails.

I am still curious of the person, Joseph Majewski Jr- further searches ended up in LinkedIn profiles of people with the same name, and ancestry tree links which just want you to pay or signup for more info.

But I did end up in Wikipedia on the company that made the Juice-o-Mat- The Rival Company:

Rival was founded in 1932 by Henry J. Talge as the Rival Manufacturing Co., which specialized in die casting. They soon began producing food preparation products under the “O-Mat” line, such as the Juice-O-Mat juicer, Can-O-Mat can opener, and Broil-O-Mat broiler. After shutting down to produce ammunition during World War II, Rival expanded their product lines in the post-war era. They acquired Waverly Products, Inc., expanding their products into the home appliances market with Waverly’s popular Steam-O-Mat iron.

In 1963, the company was sold to Stern Brother Investment Bank, and went public in 1964. Soon after, they acquired Titan Manufacturing Company and their line of portable electric heaters. In 1970, they acquired Naxon Utilities Corp., makers of a little-known product called the “Bean Pot” slow cooker. Rival re-introduced the Bean Pot as the Crock-Pot in 1971, and it quickly became one of their top products.

From the Juice-O-Mat directly to the denizen of the 1970s, something I use now, the Crock Pot. Look, my own is a Rival Brand! 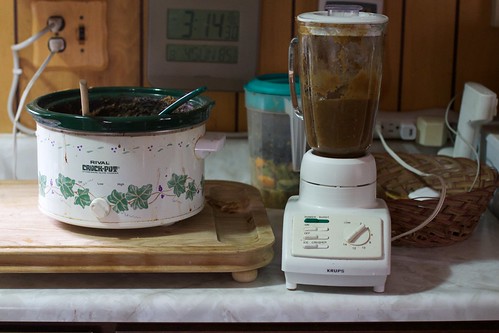 A company history suggests that Rival’s rise to a $300 Million+ sales enterprise (1996) started with that humble juicer.

The Rival Company is a leading manufacturer and marketer of small household and personal care appliances, as well as commercial and industrial fans and ventilation equipment. The company also manufactures a line of sump, well, and utility pumps. Rival became a household word in the early 1970s with the introduction of the Rival Crock Pot, a slow cooker that literally changed the way dinners were made for many people. Other items manufactured include can openers, meat slicers, grinders, toasters, ice cream makers, space heaters, ceiling fans, shower head massagers, humidifiers, air purifiers, and more. Rival products are sold under many brand names, including Rival, Rival Select, Simer, Pollenex, Patton, Fasco, Bionaire, and White Mountain.

Rival was founded by Henry J. Talge in 1932. Talge was born in Russia in 1892 and moved to the Kansas City area in 1925, following sales jobs in Chicago, Detroit, New York, and St. Joseph, Missouri. Then called Rival Manufacturing Co. (a name carried through the early 1990s), the firm started as a specialty die cast operation. With eight employees, Talge set up his first factory at the former Hempey-Cooper building at the corner of Archibald and Pennsylvania in the Westport district of Kansas City.

Rival’s first product was a manual citrus juicer, called the Juice-O-Mat. The “O-Mat” tag later become a trademark on many new product names, including the Can-O-Mat (can opener), Broil-O-Mat (broiler), and Ice-O-Mat (ice crusher). Talge saw a need for many products to make cooking and other food preparation procedures faster and easier.

There’s quite a bit more of crock history there…

It would look like the Talge family went a long way on the design ideas of Joseph Majewski Jr (and maybe others). I am still left wanting on the inventor’s story, and I might dig more but it’s already 3:00pm and I have wandered far down the trail.

But there is a lesson there- we have to products, the patents, the juice-o-mats– but where are thr stories of the inventors?

It’s not even done much in the realm where Jon saw it first, the tech developers. It’s left vacant in my rarely updated rss reader.

Most everyone is too busy to be bothered by narrating, having left their blogs dry for Facebook, twitter, wherever sles, hanging out the Busy Backson sign 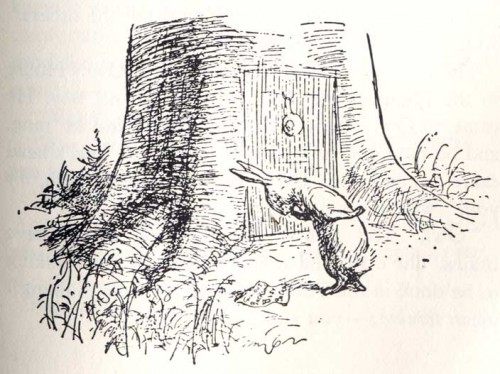 Well summarized in my go to book of Philosophy 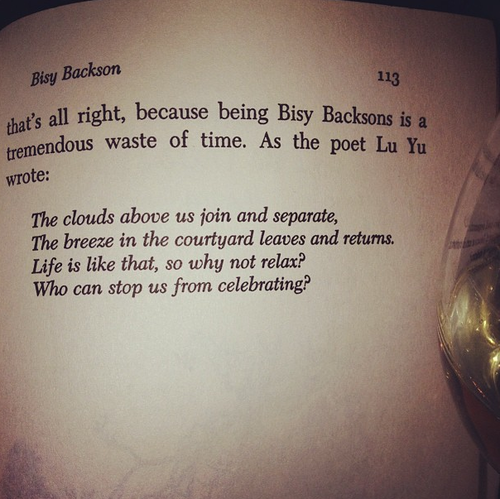 Oh well, at least I have my Juice-O-Matic, and a love of its old metal design.

And a glass of juice.