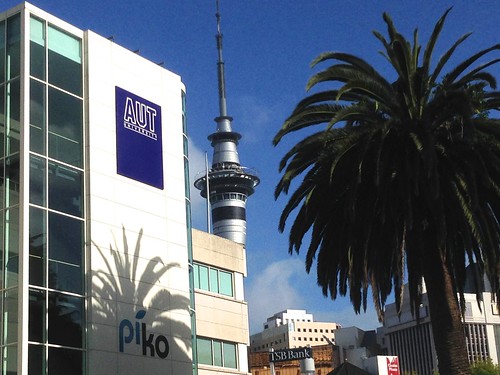 Tuesday brought a glorious blue sky day to go into Auckland again, today to do sessions at Auckland University of Technology. My contact/host today was Thom Cochrane, who like Claire Donald yesterday, I first got to know in my 2004 visit to UNITEC (my scheduling of return flight was bad in that I missed by one day seeing Mark Northover, whom I’ve known from previous visits and has also come here to Arizona).

We met up with Thom in his regular spot to start his day, a hip coffee shop named “Remedy” down on Queen Street. Today’s brew was a long black. Very strong.

The first session was one not exactly done before, but drew on parts of Being On/Of The Web and Beyond the MOOC Hyper: Open Connected Courses. Thpm’s title as he posted it, Affordances of the Open Web

This spoke to me to draw in a bit of Donald Norman’s Design of Everyday Objects to talk about affordances from a design sense- the way the design of real world things suggest their function (and give feedback).

This led me to start with a collection flickr tagged photos of shower interfaces that seem to require a bit too much text to describe how to use them.

I used a set of quotes about open from Nancy White (“openness is an attitude”) and Davide Wiley (“open facilitates the unexpected”), but new this time around, added one from Catherine Cronin’s ALTC talk Navigating the Marvellous: Openness in Education:

“…Although we can connect and interact within both physical spaces and bounded online spaces, we cannot easily share what we are doing with a wider audience, nor can we invite our networks into our learning community. The message remains: what we do here is separate from all else we do. Formal learning is divorced from rather than integrated with informal learning practices and networks.”

Then it was trying my arm wave about the distributed network structure designed by the internet creators, and how ds106 and other “connected course” leverage that model – it is what the web is made of. There’s also the thing where I show sequence of simple symbols leading into 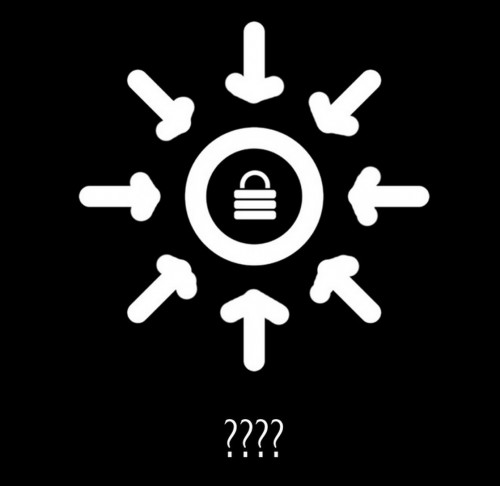 I pose these as questions to see what people come up with; I suggest that much of what we see as online, even open learning as a lock at the entrance door, even be it just a login.

Then it was a flyby of a collection of open distributed aggregated courses, leaving with an arm twist to participate in Connected Courses.

Then it was a break for lunch and conversation. Thom gave me a tour of the center he runs at AUT that supports a lot of experimentation and development in mobile and social technologies. I’m not sure I got a cleat answer why his computer was quarantined 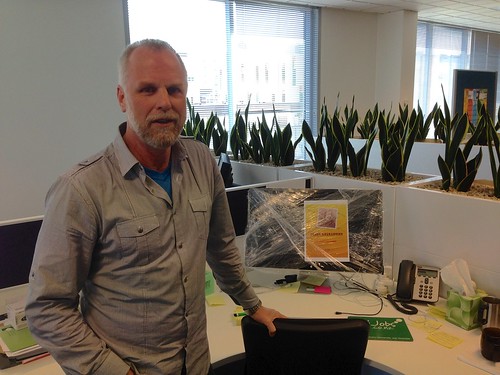 It might not be representative, but I’ve been noticing at these events that during meals people tend to stand and talk in small groups. It’s not for a lack of chairs, but my hunch is they enjoy moving around and talking in groups. Just a guess. I enjoyed listening to Dee (?) who is and works with Maori projects in mobile/social media. She told me all through their history, the Maori were quick adopters of new technologies and shared that the usage rates of mobile technology is very high across the Maori people. I was curious if there were any non mainstream social spaces that were popular, but it sounds like Facebook is the big player there.

After lunch, I did 2 more hours of Storythinking > StoryMaking > Storytelling

This might be one of the talks I’ve done the most. I had always thought I would get tired doing a talk over and over, but it’s never quite the same, and these last few have gotten something added. removed, refined each time. I’ve added more video examples to show the elements of storytelling, and have to admit, that while I have seen them many times, now, the Google Nexus one and the Budweiser Puppy one still hits me emotionally. That is the thing people pick up on when I compare two examples.

But you know what also works really well? The first element I talk about is the importance of a powerful opening, “a once upon a time” that pulls you in, and Frederick Brown’s Knock is a gem, plus it shows a story can be just 2 sentences AND it shows the power of an unexpected twist. I totally owe this one to Bryan Alexander.

There was a lot of really good discussion and commentary from the group. After going through the idea of stories having a shape, I ask how that story shape might play out in other forms of communication. I often ask about using that structure in an email or a presentation. There was a really good one shared by (??) Abbie (he said it was a nickname) a graduate student who said he used an approach like a story shape in the way he framed feedback to students.

Wow, I am using that one in the future. Like tomorrow. 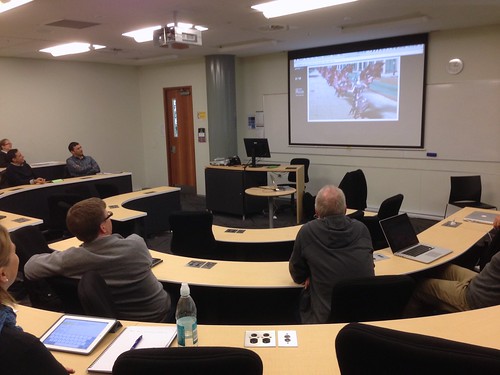 We did a round of pechaflickr with maybe 28 people participating. They chose the tag “vampire” and it did not disappoint! Two people got stumped when an airplane showed up (it’s a British fighter jet). It’s really fun to be able to give them examples from their own participation about adding elements to the shared story not in the photos, and how people do (or do not) manage the handoff when the photos change.

Another full day, another great group of educators met. I return here Thursday for more.

And at the end of day? Ahhhhhh 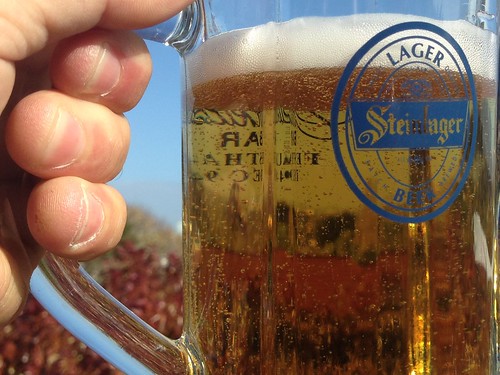