Our reviews came in as “icky”. “Risky”. “Manipulative”. Hey, pleasing all the people all the time, not worth trying.

Last Friday was my last act in Canada from a 4 month stint as an Open Learning Research Fellow at Thompson Rivers University. As a nice dessert to the experience, Brian Lamb and I were invited by Clint Lalonde and Valerie Irvine to do a live web session from University of Victoria for Open Education Week.

Our title “THE OPEN WEB (a) Lost (b) Reclaimed (c) Co-claimed (d) All of the above” was meant to poke both at multiple choice assessment and what seems to be all to often the polarizing of issues in educational technology (“open vs closed”, “LMS vs Open Web”) whereas (we think) the reality, like the uncertainty fields of electron locations, lies in between. This was the framing to talk about our efforts at TRU during my time there to raise interest and activity in using the open web through our SPLOT tools and the You Show open seminar

An outline of our major points was established earlier (working as usual at our office at the Fox and Hound in Kamloops). I finagled a way to deploy the presentation via a WordPress site.

We took the scenic Fraser Canyon Route and had plenty of time to work out the ideas and see some scenic spots along the way. Brian has longings for a new university planned at this locale: 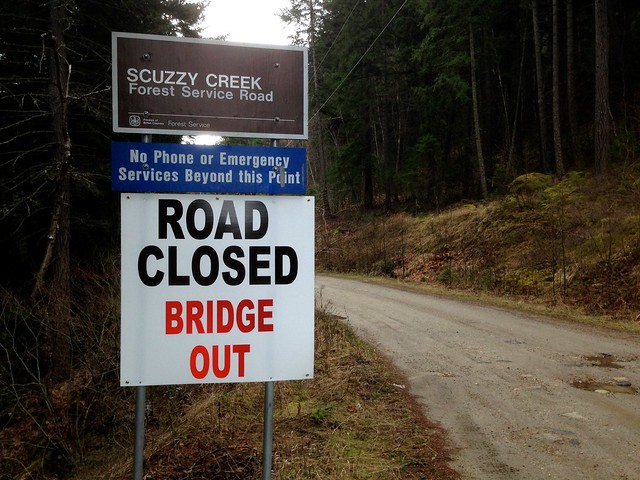 Sitting on the deck of the BC Ferry crossing from Tsawwassen, enjoying the sunshine, I turned to Brian and asked, “So what is our shtick??” We thought a bit about reprising our You Show video characters. I had wanted to do one more episode where they left Kamloops for a “Big Meeting With High Powered Executives in Victoria”; alas we ran short on time. And sitting there on the ferry, we both agreed, most of the audience would not even connect, since our viewership on the videos peaked at 200 in week 1 and dropped to 14 by the end. Alas, metrics.

Thinking about the false positions of “Reclaim” vs (what ever is the opposite), and my idea of “co-claiming” as a middle ground, I asked Brian, “What if we have a public disagreement?” “Like where we disagree on how to approach the open web?” “Yeah”. 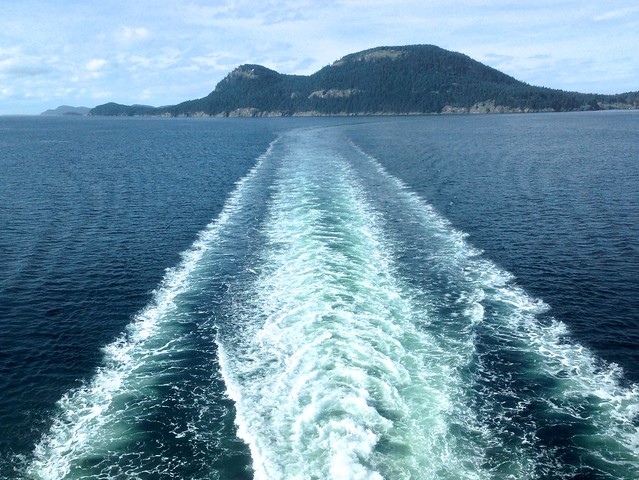 I hope to write soon about why I gravitate to wanting these narrative aspects to public work and open courses. After the summer 2011 performance teaching of DS106 by Jim Groom as Dr Oblivion, I questioned whether such a narrative was important.

That changed once I tried it the following summer, in teaming up with Martha Burtis for our ds106 as Camp Magic Macguffin.

I am still working on that rationale, but I could see in Brian’s response this was interesting. I can say, for me as a teacher or a presenter, it gives a whole boost of energy and motivation to the entire activity.

Before the ferry landed we decided we would pen our presentation with us walking out on stage as if we were dis-agreeing about stuff in the presentation– Brian would be defending position of trying to make use of an LMS in a frame of open web, and I would accuse him of selling out. It would be just a short opening to set things up, the idea is that our host Clint would break it up and snap us into shape.

The point was to show that extreme positions are not necessary. It need not be “LMS” vs Open Web. It need not be a false dichotomy because it need not be a dichotomy. This in fact was the gist of the “good vs evil unicorns” post Martin Weller made after this incident (not implying we were any influence, Martin blogs just fine on his own material).

That night we met up with Clint and a few other friends/colleagues for dinner and beers. We asked them for feedback on the idea; and we definitely wanted Clint (and Valerie) as hosts to be clued into what we were doing. But we felt like it would be good for the audience to be a bit questionable at first; not to play it out too long, and to reveal that ti was a performance to make it clear to all.

The conversation was useful- in fact, someone else shared a conference experience where a presenter used a rather generation-dated Saturday Night Live reference to a co-presenter named Jane, and how badly it fell because most of the audience did not even watch SNL in the 1970s. it sounded painful and obviously a bad idea. In hindsight.

So yes, the performance thing can be risky. We knew that. We discussed it.

But if we avoid all risk in public presentations, does that leave only reading PowerPoint slides (oi, there’s a dichotomy right there) (see how easy it is to fall into that?).

To us it sounded fun. Anyone who knows Brian and I know were are way too good friends to argue over the content of a presentation. And I loved it when Brian launched the narrative with a tweet later that evening.

NOTE: Apparently Maha Bali feels like my summary in the post was a bit “tamer” than the tweets below tell it. That’s the point too, people have a spectrum of interpretations. I will say our language in the tweets got a little passive-aggressive, but to me, not really personal attacks. Your interpretation may differ.

We met up in the morning for breakfast and to fill out the rest of the presentation site. And we amped up our public disagreement in twitter, with me questioning some of Brian’s slides, and him asking me why I was taking them out. It went on, where it sounded like I locked Brian out of the WordPress site.

I would hope there was transparency to the antics. First of all, we are both long time twitter users, and if we had a disagreement, the last thing we would do is play it all out in public, that’s what Direct Messages are for.

But of course, not everyone knows us, nor might understand. People can take things on twitter at face value (that strikes me as odd).

And we escalated it a bit, people jumped in. Clint played it perfectly, telling is to get our act together. We each got private DMs from friends, right up to the time of presentation, asking if this was an act.

Ok, it may not have been the most wise choice, but it was an interesting social experiment. We carried it into the opening as planned, but called it out clearly about 3 minutes in. Still, some people felt a bit offset by it. Others totally saw it as acting. I regret if people felt disturbed– at the same time, it says a lot to me that people care that much to be concerned Brian and I were fighting over, of all silly things, a presentation. I’d be more worried if people did not react like that. 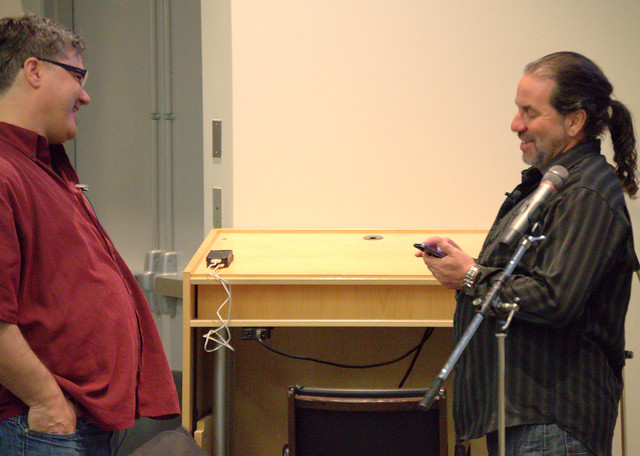 And we even hugged on camera just to be absolutely clear.

We may have hammed it up in twitter, but that was in character. Is it manipulative? Perhaps at am emotional level. I doubt I would do it again (never ever say never), but I am not going to apologize. Did it distract from our presentation? Perhaps, I felt like it addressed the entire point.

In our actions, we are generally very clear to ourselves on intent, but like all communications, as much depends on the receiver as the communicator. There can be a whole spectrum of possible ways people interpret you, and often far from your intent. That’s what makes things interesting (?)

Anyhow, I wanted to capture some of this not to thrash it out or argue; I’d rather talk about the presentation itself.

Just for some fun, I storified a lot of the theater. Is there a wrong or right here, or somewhere in between? Only you can answer for yourself.

Icky it is. Ok. Sometimes its okay to be icky. As long as you don’t be icky all the time.