Time travel is rather exciting, but it does where you out. Or maybe that was staying up until 3:30 am getting ready for a talk?

I shall garner negative sympathy for doing a keynote in Hawaii, but when the invitation comes… take it. I’m totally honored to be in the poster with other luminaries for the 20th Technology, Colleges, Community conference 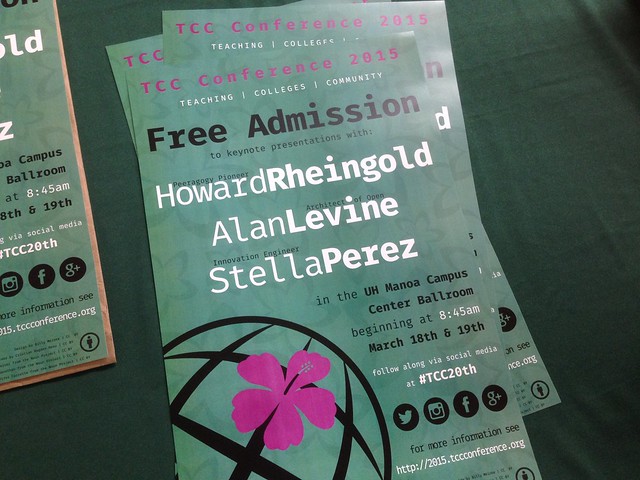 My idea for my opening keynote today was to revisit the web of 1996, the first year TCC happened as a totally online conference, to speculate how, if any, the web 20 years later has progressed:

In 1996, the first year of TCC, the web stumbled from an internet oddity into mainstream popularity. Now, a scant 20 years later, most students entering higher education have never lived in a world without the web; to them it is not even a technology.

The clues to projecting what a future web might be can be found in the present; there are already ways of using it beyond links and pages. By looking at current ideas and examples, by addressing the issues of assertion of our digital selves, web making, the Indie web movement, and a federated wiki, we can confidently glean a glimpse of what the web could be in another 20 years.

I got this idea to steal the idea of Bret Victor’s brilliant 2013 The Future of Programming talk where he pretended to be talking about the present from the year 1973.

Thanks to the Internet archive I was able to do some web paleontology find all of the archives from the 1996 conference including the papers, the keynotes done via links and email, even the logs from the MOO sessions (not MOOC, MOO!). Conference founder Jimmy Shimabukuro blogged his notes, old emails, and thoughts on the conference too.

Wow, I dig this sketch by someone I do not even know!

At first I thought I’d stumbled onto an old TCC recording! Great talk by @cogdog for @tcchawaii! #TCC20th #sketchnote pic.twitter.com/4S9MJJCkgz

I pulled out the full retro. I had a t-shirt made at Zazzle with the old Yahoo logo 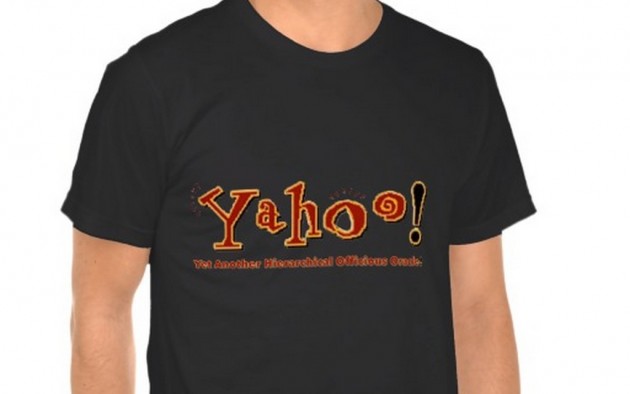 and ordered on ebay some props- a Sony Walkman (technically not out until 1998, I pretended I found a prototype on a plane “left by a Japanese businessman”) and a StarTac mobile phone (I did have one myself in?? 1998) 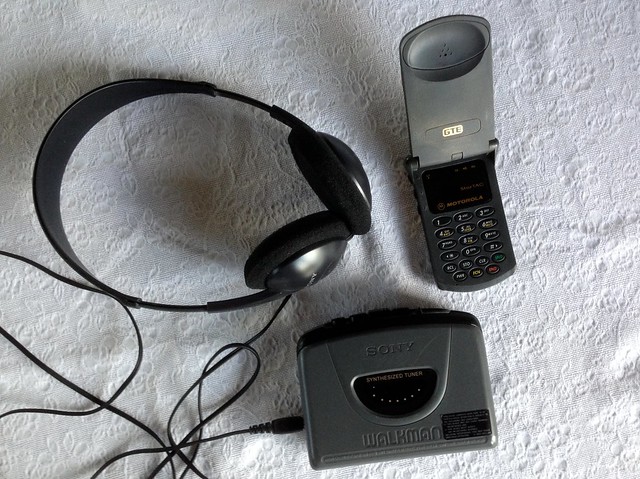 For my “slides” they were done on the web; you can find the presentation I used at http://cogdogblog.com/stuff/tcc15 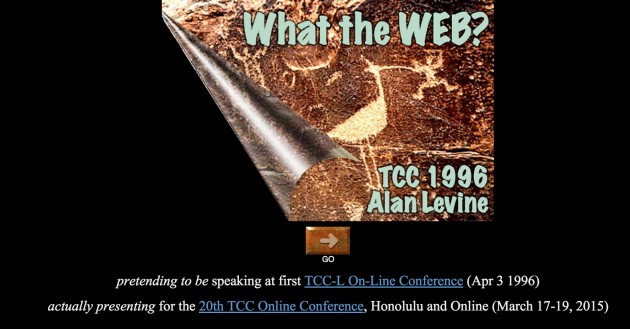 The setup was to make sure it was clear I was talking like I was in 1996 (I forgot to include mention that Bill Clinton was just re-elected to his second term, and maybe a baseball reference that I thought the Yankees might do well that year), but referencing the Yahoo shirt and how they had really helped to organize the web since it would be “really hard or impossible” to have a search engine for the whole web. I did mention there were two Stanford students working on an experiment called “Backrub” that might be big.

One cool thing about combing through the archives was finding that my friend and colleague Nick Noakes was at TCC in 1996; I saw him in the email archives and the moo chats. A few weeks ago I called Nick on Skype and asked him to talk as if we were conversing in the MOO:

I talked about technologies of 1996, digital photography, the shrinking cost of data storage, video on the web, portable technologies like the StarTac phone and the Walkman (I fumbled a bit slipping in a cassette provided by Curtis Ho), pretending to have it play instead a hit song from 1996.

And I even speculated that technology might shrink so small it might be on the kind of device used by Dick Tracy.

In framing the web of 1996, it was talking about the rise of its use by business, differences between companies just putting up sites, and new companies that leveraged the capabilities of the web (Amazon), plus some of the bust predictions by Bob Metcalfe.

I dropped a reference to Howard Rheingold (since he is speaking tomorrow) using a clip in the 1993 Computers Chronicle show about the internet.

That was all setup, the point I was hoping to get to was to frame how the web of 2015 might be different from the original concept of a distributed set of linked documents. The first was to describe Ward Cunningham’s Wiki Wiki Web (which itself will be 20 this month), as a different way of thinking about the web than pages, but as a networked collaboration space. I had hoped to have some audio of Ward describing the web of how he saw it in that time, but he did provide me some notes I could use to frame it. (“It’s great for collaborating on ideas about software programming, but it’s not like anyone will ever build an encyclopedia in a wiki, how can one top Encarta?”)

I wanted to make it seem like he was already thinking about a new kind of wiki, the Smallest Federated Wiki he is working on now in 2015. I tried to describe it in contrast to the Wiki Wiki Web, which focuses on convergence (many working on one wikis) where in Fedwiki, it is many working on many wikis. I told the audience I would show “just a conceptual mockup”– 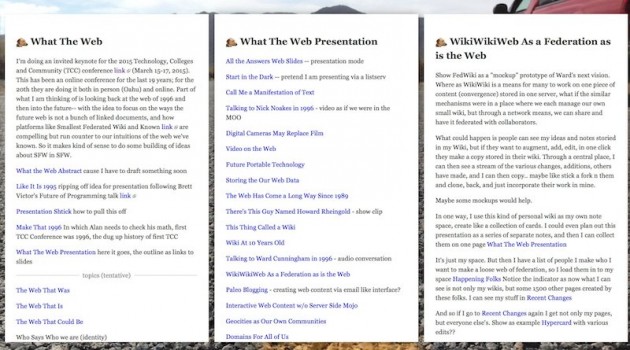 In fact, I showed them what I actually did for this talk, I used my Federated Wiki to plan out this talk, it has a lot of notes and ideas, many of them not even used, but then how I pulled them into a view that has my presentation organized.

This of course is a Federated Wiki without the federation, so I (tried to) jump to an example from the current Federated Wiki happening, a series of various forks to notes on Hypercard.

I think I made some bad metaphor about piles of mashed potatoes and grabbing a forkful for my own plate.

Then it was talking about the complexities of creating HTML on 1996, having to upload it to a server, making a home for our stuff in tilde spaces… I speculated of some future tool where web publishing would be as simple as the process of writing email. What if we could do things in a web page like interactive multimedia?

Geocities looked in 1996 like a great way for people to create their own personal web spaces “They are using small ads to support the cost of free sites, is that a good tradeoff? But it’s not like some crazy corporate yahooligans would ever remove our sites, right?”).

And what if in 2015, there was some instant way to create web sites instantly? 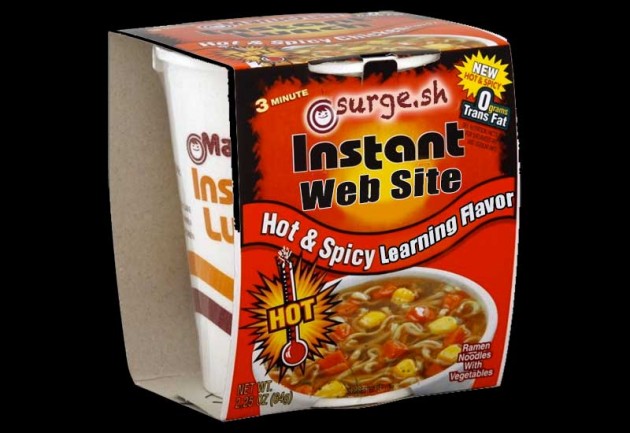 I had to wave my arms on how in 1996 there of course is no command line in Mac OS 7, but in the future we might have an operating system just like a web server, and there could be this magic thing called surge that could instantly make our local web directory into a live site?

(this is real cool) (more blogging needed on it). So I showed them my local files being published to surge: 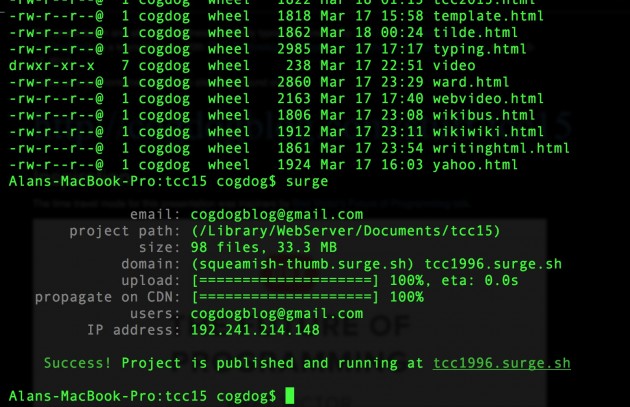 Yes, my entire presentation is there at http://tcc1996.surge.sh/.

Sadly I ran out of time trying to predict the existence of known.

I added a bunch of references to the end of the presentation.

The “look” of the presentation is modeled directly from web presentations I did myself in 1996, down to the beveled buttons I made in Strata3D, and even re-editing the cover image (my own pre-digital photo of petroglyphs at Painted Desert National Park).

Instead of the old school layout done with HTML tables, I remade the site using a Bootstrap framework so its responsive and even supports HTML5 media and audio tags. I tossed in some jQuery animations and triggered audio for the email opening (click the screen).

In 1996, I had to manually code the links on the navigation buttons, which of course gets tedious. I came up with a modern approach that is more flexible; the buttons are actually populated with empty links:

I include a JavaScript library that lets me define the series of slides (it’s the name of the files w/o the “.html” extensions), and some jQuery that figures out what page I am on to re-write the links for the buttons:

And now this post has taken too long to write to accurately detail my appreciation and respect for the people like Bert Kimura and Curtis Ho who have made TCC a vital online conference for 20 years. This is a remarkable story in a span where so many web services have bitten the dust, when organizations come and go. It has a lot to do with the people who lead it and the people who participate in it (not the technology). 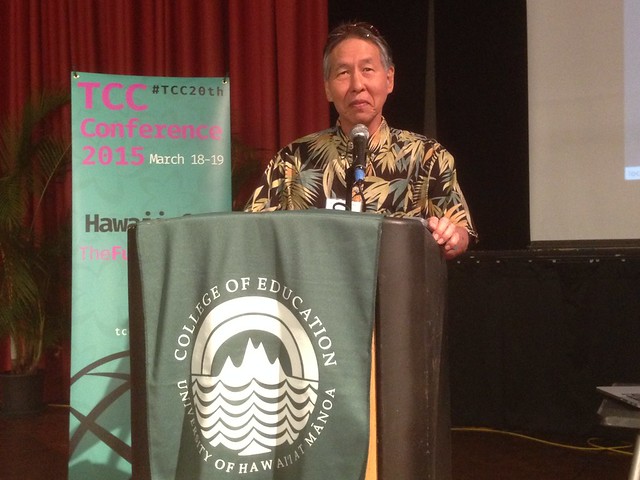 And I want to extend a huge TCC thanks to Bert Kimura, who I met first at a League for Innovation conference in 2003 (their sites are dead) and built a collaboration between Maricopa Community Colleges (my MCLI pages are gone) and TCC. I presented on photoblogging for TCC in 2004 (there was this brand new service called “flickr” but I talked about Buzznet), was invited to do a keynote in 2005 (where I somehow wove Harry Mudd and Small Pieces Loosely Joined together), and bringing the DS106 Show to TCC in 2013.

Bert and his wife Mary are also friend, having hosted me before in Hawaii and in 2008 during a visit to Japan, meeting up in Chicago.

It has so much less to do with technology.