Whilst passing through various discussions, tweet streams, blog posts about education, I end up feeling like Michelle Flaherty because I am always reaching for my experience and examples from ds106 (I won’t embed the video ;-)

While not much actively involved lately, since 2011, I have been an open participant, a face to face course instructor, and online instructor, a web site builder, a radio show broadcaster. More than #4life, it’s #inlife or just #partoflife.

So in week 4 of #rhizo15 Dave asks Can/should we get rid of the idea of ‘dave’? How do we teach rhizomatically?:

But what is the role of the facilitator/teacher/professor where we are using learning subjectives, where learning isn’t measured and where content is actually other people? What cultural concepts do we have that we can use as models? Do we need a new model?

It’s a powerful question; the rhizomatic concept is free form growth, no center, yet, to some degree, Dave, while not at the center, is somewhere with his fingers on a few buttons.

Yet, like that one time in #ds106, it’s been done here. In the Fall of 2013, there was no scheduled ds106 course planned at UMW, or elsewhere (more on the multitude of ds106es below). I had this idea, that because we had on the ds106 site the compendium of at least seven sections previously taught, what if they were set up as a series of posts published by calendar schedule every week? (wordpress scheduled posts).

Essentially, I asked, what if there was a ds106 without a teacher?

But I am not teaching it. Jim Groom is not teaching it. No one is charge, though I have a call out for volunteers to assist. You are not signing up to teach but to assist, help, cajole, stir the pot, in whatever way you see fit.

It is really in response to challenges we know for open participants, three is not structure or map through ds106. So if you seek that, you can do it along side others. The Syllabus has the time schedule for topics, starting August 26. If you want an idea what each week entails, see the Spring 2013 Weekly Announcements.

Somehow, others in the community started calling it “Headless ds106” resulting into memes of graphic decapitation

Weekly assignments went out on scheduled, tweeted to #ds106. For those that like them, there was a syllabus. Participants signed up as usually and did their work in their own blogs. We had some 80 blogs signed up, maybe 1/3 were somewhat active, and yes, the activity tailed off into the last few weeks.

The GIFaChrome show was more than just a project, it wove together a spontaneous narrative about a mysterious technology. 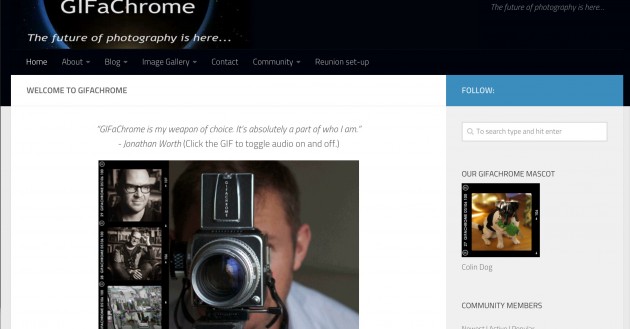 How many final course projects get their own domain?

If that’s not rhizomatic, than I am a monkey’s nephew.

The Headless DS106 has grown into the Open DS106, all of the course materials there for anyone to use, anytime.

vNot technically a course this is another experiment in offering a full ds106 experience to open participants based on previous syllabi taught at the University of Mary Washington (UMW). The first was August-December 2013 as a “Headless ds106?. This Open ds106 is a re-organization of that experience, but without references to date or time- this could be something individuals or groups could do at any time, at any pace.

How many people use it? No idea.

Somewhere in #rhizo15 (I recall it was a comment on someone else’s post) Dave described ds106 as built around a course structure and teaching figurehead. That is how it is often scene, as the iteration that Jim Groom first created and has taught more than anyone since.

Let’s play this game. The original CCK MOOCs had three iterations, all led by the same crew (CCK08, CCK09, CCK11). Rhizomatic Learning is in its second cycle, both coordinated by Dave. They ran when the leaders set up a new round.

By my count from the full ds106 history I’ve tried to keep current, there have been 41 different iterations of DS106 offered since 2010, taught by 14 different instructors, associated with, but not all the same course at 10 different institutions. Plus three others not even part of an institution. The site has more than 49,000 syndicated posts by past participants, all of the ds106 stuff is created openly and remains open.

What the one site offers is a place for teachers to sign up if they are “teaching a ds106 like course”. With one addition to a Gravity form, their course becomes an option for participants to use when signing up for ds106. The platform created for UMW to offer an open course, is extended, to anyone else who wants to teach a course related to digital media where students openly blog.

The ds106 site becomes a mega aggregator of participant blog posts, but because we associate blogs with “sections” or “courses” we can split out separate pages such as the Spring 2013 course taught at University of Michigan by Brian Short, an English Course in media studies taught in 2014 by Jennifer Travis at St John’s University.

Anyone using DS106, even if not for a listed course, has open access to use resources such as the Open Assignment Bank (where learners can create assignments for others, no that’s not very rhizomatic); the Daily create, an open web radio station.

But hey, these are still courses? Right? What do you call the group of open participants last summer who spun out their own space for the Burgeron Family? I am still not even sure what it is. There are people who’s only participation in ds106 is broadcasting or listening to ds106 radio.

John Johnston (in Scotland) and Mariana Funes (UK) have done weekly live DS106 Good Spell radio shows, with a goal of producing 106 “bullets” shows, where they talked about all kinds of issues around open learning, creativity.

There are others who just do occasional Daily Creates. Speaking of the Daily Create, today’s challenge is number 1218— that has been continuous since January 2012. An open participant, Mariana Funes, has been managing it for a year.

Active open participants, spanning multiple ds106 instances, have included characters such as a dead mountain man, a friendly talking doll, and a cow.

There has been a community supported kickstarter and a radio telethon.

So yes, you can look at one offering of ds106 and see it as rather course driven. Or you could step back, and notice that it’s quite an ecosystem.

There was this one time in ds106 camp when….