Wow it has been a long time since I saw a Brunton Pocket Transit, probably back to grad school Geology. It may not have much relevance to the post, but I warm to the nostalgia.

Maybe it does, because it was my study of Geology that got me thinking about something I saw online today.

I have this curious habit/mind game that comes up in the landscape paintings of art museums but also in movies, you see this and you might say “mountain” 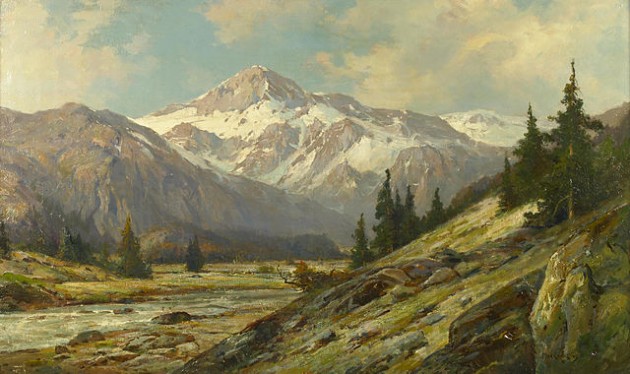 I’m trying to guess which mountains it might be, what region does it belong to, is it a Cascade Volcanic peak (no), it’s definitely got that Rocky Mountain look.

Dan Cohen’s tweet this morning of a new exhibit caught my interest on several levels:

"In Focus: The Evolution of the Personal Camera”—new exhibit @dpla by students @ Wayne State U http://t.co/BxPcgzel1P pic.twitter.com/c6YDLCgjZM

First because this exhibit, the Evolution of The Personal Camera, is about the history of photography, but also of note because it was designed and developed by students at Wayne State University.

But the “thing” happened looking at the image for America Meets the Personal Camera: 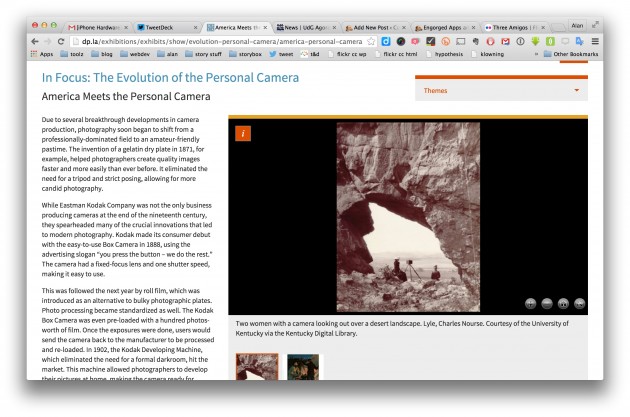 It’s the scene! Two women with a 1890s camera rig sitting under some kind of arch; the caption reads:

Two women with a camera looking out over a desert landscape. Lyle, Charles Nourse. Courtesy of the University of Kentucky via the Kentucky Digital Library.

I’m looking at the rock and the mountains through the arch, and wondering, where is this? The rock of the arch looks volcanic, pyroclastic even, and is fractured. It says “desert landscape” but as aI zoom and pan around, I am not seeing any cacti, it looks more like high desert vegetation, sage, etc. I like how with the media on the pla site you can zoom way in: 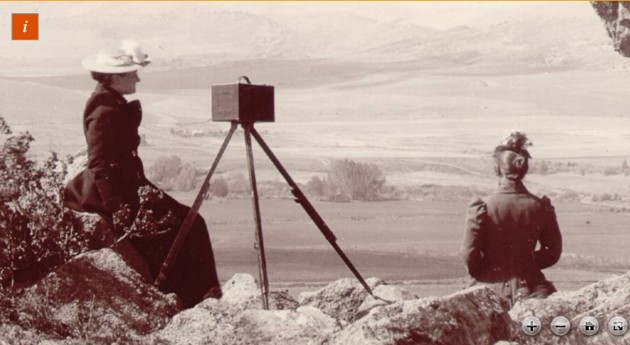 The landscape below where the women sit looks like cultivated agricultural land, not quite desert as I think of it. That and the shape of the mountains have me thinking Western Utah, maybe Nevada, perhaps Colorado, or maybe eastern California.

But it also gets to the intent of this exhibit, it’s about photography, not landscapes or geography. Yet I could use that same photo perhaps for something other than teaching about photography. And it has me thinking some about David Wiley’s post today on An Obstacle to the Ubiquitous Adoption of OER in US Higher Education. I do see the DPLA exhibits and the fact that student work is shown there as the kind of Renewable Assignment David describes, so students work on something that is not disposable, and in his new thinking, can possible contribute to the potential void in OER content.

If I only think of the DPLA exhibit as something just for the History of Photography, it cuts off the possibility of seeing in that one image, something I can relate to maybe a different activity, course, class.

And now its just late and my brain is mush, and I have completely lost hold of an idea here.

Oh well, I just got sidetracked by wondering where in the world a photo was taken.