All it takes is alarm clocks and coffee. No, alarm clocks, coffee, and a relatively small group of interesting, geographically dispersed people. And some google hangouts. And now a Slack with snarky bots.

Last week the geometrically growing Virtually Connecting was set up for several live sessions from participants at the ALT Conference (Association for Learning Technology) in Manchester (That’s England or the United Kingdom for the geographically impaired).

Many points of interest with ALT- Martin Hawksey is the tech wizard behind the scenes, that other Martin was present, and apparently is now part of the ALT furniture, 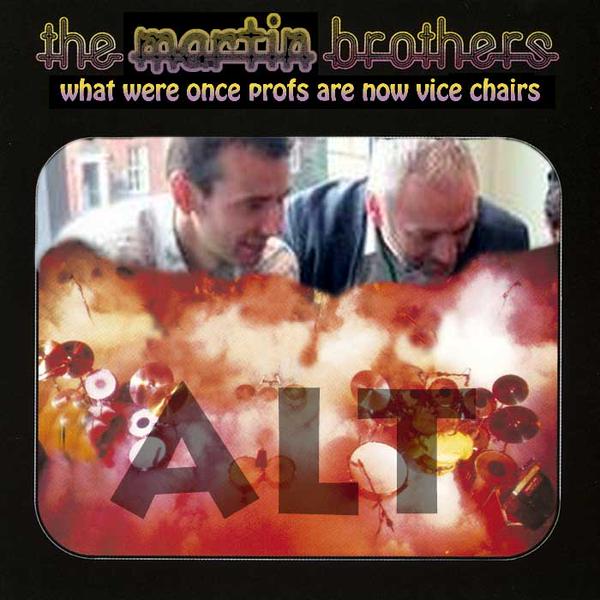 Catherine Cronin is there, someone on my “to meet in person one day I hope”, who gave one of my favorite all time talks last year at ALT, Vivien Rolfe is there, David Kernohan is somewhere nearby…

But really, the exciting thing is that Maha Bali was there in person, she for who Virtually Connecting started, her first time being an onside buddy instead of virtual, her first meeting with Rebecca Hogue and others.

The time difference for me in Arizona to VConnecting sessions in GMT time were less than optimal. But how often are things promoted as open, world wide events, scheduled for 9AM Eastern Time (which sucks for me in Pacific Time), or even 11AM my time. People in Europe, India, Australia end up tuning in at their odd hours. It’s only fair to turn that around when one can. At least if you understand that the world operates in a time zone other than your own.

So I signed up to be a Virtual Buddy for the first VConnecting session with ALT-C keynoter Steve Wheeler, it launched at 5:30AM my time. No big deal to do, set the alarm for 5am, the coffee machine for 4:55am, and go.

I won’t do a stellar summary job, and Simon Ensor has already penned one of his typical poetic posts on it.

But points of connection. You of course cannot be an ed tech in twitter/blog land without coming across Steve Wheeler. We’ve met before, once at a meeting in Barcelona, and earlier, I think in Brisbane when we were both in the same city for different meetings. Steve is good at taking my playful twitter jabs and bouncing back.

The best part was that he brought his two students who co-presented with him (eek, I am forgetting their names), but they talked the most from the Manchester side of the hangout. 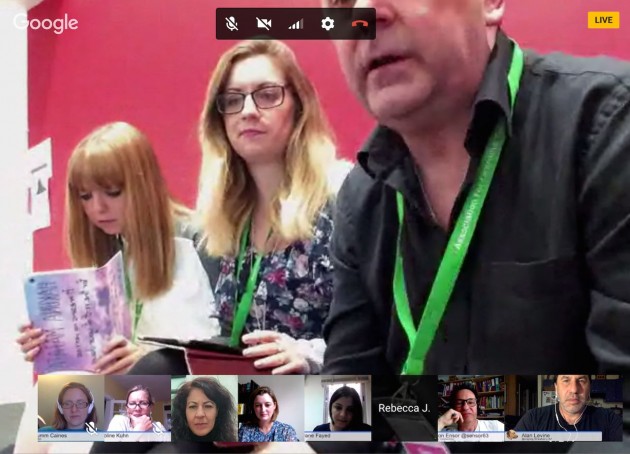 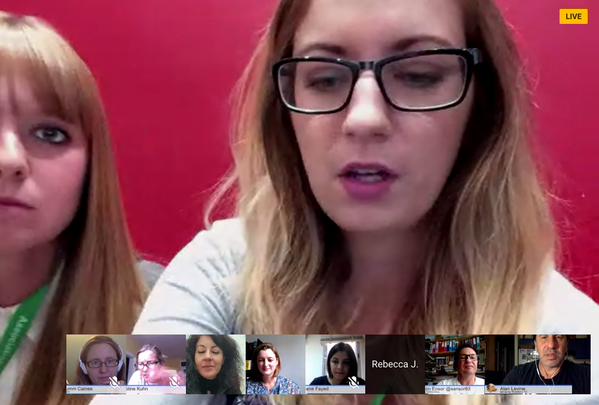 In the hangout, and the prep before was a chance to co-converse with people I had little or no interaction with before- Autumm Caines (who masterfully orchestrated much of the virtual side of the operation, and taught me about account switching in Chrome). I met new colleagues such as Caroline Kuhn, a Venezuelan in Bath (that’s the name of a UK town for you), Cinzia Pusceddu, an Italian studying in Manchester, Rayane Fayed from Beirut (sadly her connection was in and out).

A big treat, was seeing and hearing Simon on camera, in the pink curtain background of his daughter’s bedroom (she jumped in camera a few times, and now I follow her YouTube channel). I’d only known Simon through his blog and tweets, much during Connected Courses. I was curious to hear the voice behind the words, and like most of my online connections, little surprised me. From his own post I nod strongly with every bullet point:

1) I have many real friends who I have never met offline. These friendships are not virtual.

2) I am not sure that I would have been able to have so many useful conversations with these people had I been in Manchester for the conference.

3) I am sure that the effort invested in Virtually Connecting and the engagement made both deepened my ties with the people present (in the hangouts) and with the conference proceedings.

4) I developed immediately transferrable skills in the setting up of hangouts on air, the animation of discussions, and in dealing with distant time-zones.

5) I gained enormously from working in a team. You learn much about people when you do more than discuss or exchange tweets or comment on blog posts. You learn about their professional qualities, you learn from them and expand your own knowledge.

6) None of this would have happened, perhaps, if I had not been able to engage with a ‘gang’ in #rhizo14.

I came back to the edge of chaos in my daughter’s bedroom, with its pink curtains, with its curiously arranged toys, I sat down with a tame tiger and I knew that I had found it.

That same day went on with my usual stuff of life, and tweeting, working on web sites, going out in the yard with the camera, dinner etc. I was lined up to run the VConnecting session with Jonathan Worth that was scheduled for 2:45AM my time.

If you ask, then you do not know much of Jonathan’s work. I’ll leave that as a research exercise, but he is one of the most honest, insightful voices into education and technology (not mashed together), he’s a friend in all of the ways. I’ve dined at his table and spent a night sleeping in his studio.

I will be honest, I did not stay up all night, I took a two hour power nap at 11:00pm. Got up at 1am, new pot of coffee. I wanted to watch his keynote (archived, thanks for the live stream, Martin!) so I’d be ready for the session.

Jonathan asks some hard questions about the intersections of online and our lives. When done, there was a bit of a pause when it was opened up for questions. Thus it was no surprise that the first was from an Egyptian educator sitting in the front row: 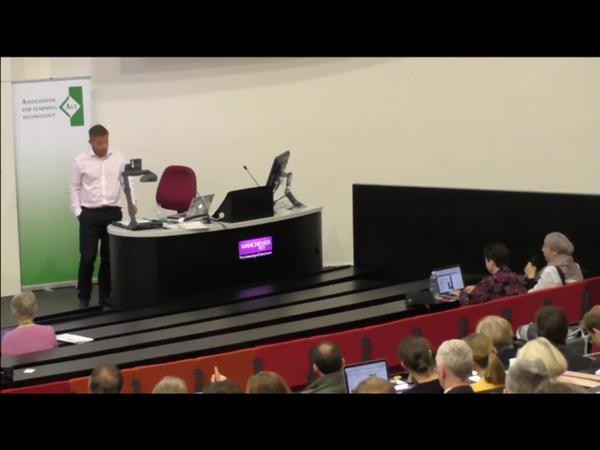 Yes, that was Maha, sitting next to Rebecca! I am glad a did a screenshot in my iPad to freeze the moment.

In the Vconnecting session, we had Simon again, and Suzan Koseoglu (continuing the theme of doing a hangout from a daughter’s room ;-), Stephanie Loomis from Atlanta, and Lisa Hammershaimb also on early morning hours. 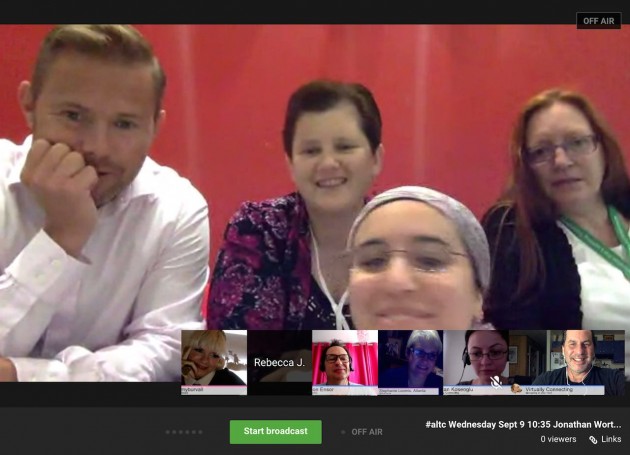 I was pleased to bring Amy Burvall into the arena, as she had been up late as well doing her unique sketch-noting of Jonathan’s (and also Steve’s) talk:

And of course, we had a crowded group at Manchester with Simon, Maha, and Rebecca all together:

I was rather wired, so I stayed up doing another VConnecting hangout til maybe 4. I might have to look that one up to mention it. This post as already too long and fat.

About that Connecting Trick 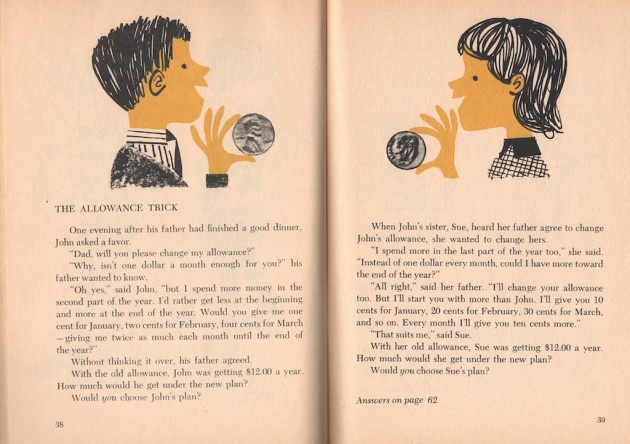 From Zero to Zillions

I was such a nerdy kid I enjoyed books about math and numbers, I remember well Zero to Zillions, its ticks for remembering multiples of 9, introducing me to the Fibonacci sequence.

One kid asks their dad for an adjustment of their $1 a month allowance (this was 1970, cough, inflation), saying they needed more money at the end of the year. The first kid asks for 1 cent the first month, then doubling to 2, there after doubling each month til the end of the year. Dad, not doing the math in his head, agrees. He then offers to the other kid a different deal, perhaps better, starting off better than one penny with a ten cent start, and increasing 10 cents each month. That must be better deal.

Even if you have to turn to page 62 for the answer, you find out the first kid is clever, because they know about geometric progressions, which seem to start off slower than arithmetic ones, but over time, whup them by a large margin. I learned this in my university geology classes as the Malthusian growth model which may or may not have heavily influenced Charles Darwin.

The funny thing is that in the Zero to Zillions book, it is the boy, John who cleverly asks for the penny start allowance plan, while in my memory, I always remembered it as the girl, Sue, who was more clever. I have no clue why, but here is yet another example of math bias favoring boys over girls.

But that’s not the point, the Simon Ensor “it”.

You see, many people have grand dreams to change the world of education on large scale, massive teaching of one to millions, introducing automation and personalization, apps that will replace teachers, robot tutors that know us better than us. Trying to affect many with one approach. That’s the 10 cent plan in my book.

I’d rather work in smaller increments, cells if you will, like the number of people in a hangout, or in a Slack for planning the VConnecting sessions. That is starting with a penny’s worth of connections. But then it doubles, more people come in, and it doubles.

I want to be part of geometric progressions, start small, and let it grow, grow, grow.

The other thing is I am more than ready to discard the “virtual” adjective. It has no meaning, onsite/virtual or face to face/online. I tried to probe this before in We, Ourselves, and I. Tim Klapdor produced a great video today on Ditching the Duality.

Through not just the hangouts, but the preparation of the hangouts, this false dichotomy we draw between modes of communication dissolves for me. Virtual has no meaning for me anymore.

My mind flutters, yes like a butterfly, back to my experience with a friend I have never met. In 2011, when I shared the news of my mother’s surprise death, among the many heartfelt (no that is too small a word, but I have no other) messages I received, from people I had never met, was from Claudia, a teacher in Buenos Aires. We have “talked” between blogs and twitter. Was that “virtual”? But she shared with me an interpretation of a poet who explained dreams as meeting people we have never met:

Maybe I just dreamt of you, kind of trying to be in your shoes. But hey, technically speaking, I do not know you. I first met you in 2007. We’re strangers. And yet, my dreams hyperlink to your news and I hear a strong wake up call, just as when a close friend of your f2f life loses a loved one. Such is the mysterious story of the social web, I guess.

A Spanish poet, explaining what dreams were to him, said: “I only know I know a lot of people I have never met”.

The Internet is like a dream. A real one.

I was so touched by this. It was one of the most real expressions I have ever heard. It dawned on me that all of my communications with Claudio have been asynchronous. I forgot who suggested but we Skyped for the first time when I was in Baltimore for Mom’s funeral. Talking with Claudia once stands out as one of my most personal and re-assuring that the world might be okay experiences. Our paths mingle, I see her favoriting some tweets or photos, and I see in twitter what she is up to.

We may likely never meet.

I cannot call this relationship virtual.

It is more real than real.

And that is the “it”, Simon. There is no virtual. There is connecting, starting with one connection at a time, and geometrically growing from there.

Top / Featured Image Credits: a scan of pages 38-39 from Zero To Zillions. I have no permission to do so. It’s probably copyrighted. But sometime in the 1970s my parents bought a copy, and I bought a second copy a few years ago. Scholastic got two purchases out of my family. I shall not monetarily gain from this image. Isn’t all this dance stepping of digital ownership silly?