EDUCAUSE. The Big One.

I’ve not been to the Big EDUCAUSE since 2004, in Denver. Back then I had more hair, less weight, a clunkier laptop, a blog only 1 year old. They were heady times. My visual memories are the massive main auditorium, having to wade through the vendor hall to get coffee, and seeing lots of people between sessions sitting in the floors, big black laptops out, reading email.

Since then the email screens got smaller.

Going this year was an unplanned thing, but was really to see some special people, and since the end of my long trip nearly overlapped, and with help from a magic pixie I got a one day pass. 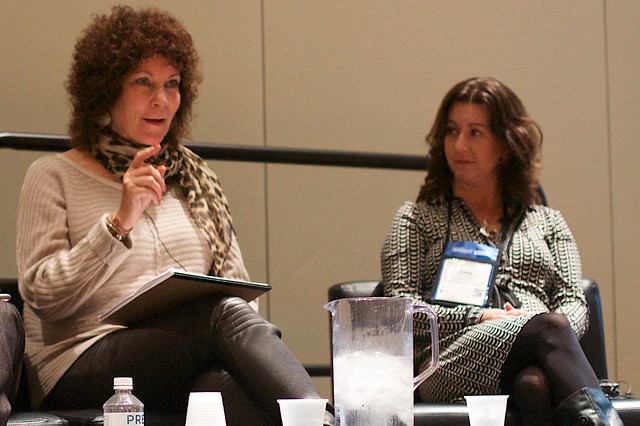 I don’t have much to report on the conference, I went to maybe 4 sessions, the best being one on Women Disruptors in Academic Technology and IT (I must say I saw little need for the “D” word, these are leaders who talked about making change constructively). It was also because I knew almost all the panelests and I wanted to listen and say hi.

But the highlights for me were being part of two Virtually Connecting sessions (not part of any agenda, we are rogue) where someone onsite (here me and Autumm Caines) do a Google hangout on Air with a group of people not at the conference, usually from multiple continents. My favorite way of describing it as bringing the conference experience of the hallway conversations to people who are not there. This is usually the big value of attending a conference and the thing nearly always left out of virtual conference attendance (you get to watch a presentation stream and tweet, wow).

Part of the mission the first morning was scouting a location for running these sessions, preferably a place the guests can find (a challenge as the Indianapolis Convention Center is the size of a small city), where there is not a lot of background noise, good light, and electricity. Oh, and wifi. We found a spot near windows on the second floor that was around the corner and down the hall from session rooms. It worked well, though Maha Bali is always conscientious of us avoiding broadcasting people who may walk by in the background, as they would not know they are being broadcast. We had enough bodies to block the background (right?). 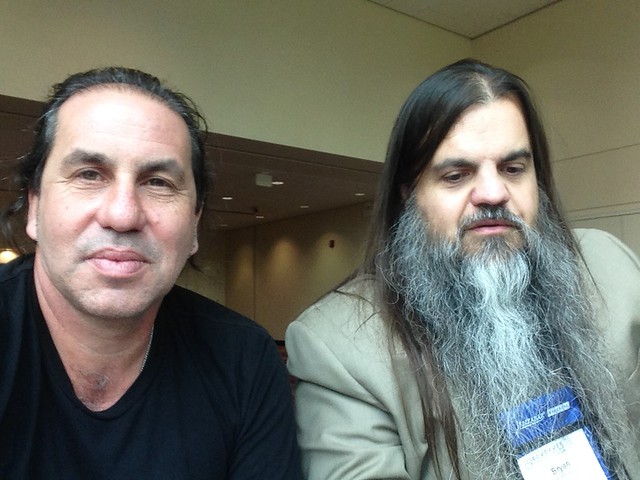 On Wednesday October 28 we had (my suggestion) as guest Bryan Alexander. Besides being a good friend and someone brimming with great ideas, expert knowledge, and obscure literary references, Bryan brings an energy that draws others into conversation. Some people speak well, but when you see Bryan in action, you will notice how much interest he takes in all participants, how he listens, and how he invited them in with conversation.

Joe Murphy did an awesome job as the host (hosts are always remote buddies), and apparently it was a do of twos- we had two Mahas, two Alans, and two beards. we had a packed hangout row. 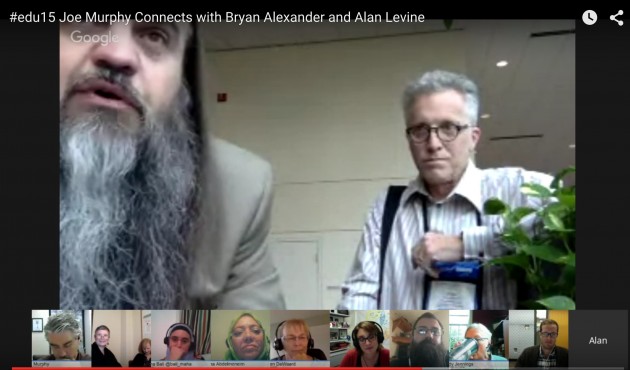 Bryan and “Pete” (?) at EDUCAUSE 2015 and a full house of virtual participants.

This was totally the loose way I love to have these hangouts go, highly conversational. Somewhere in the middle I got up to say hello to colleagues Tom Woodward and Molly Ransome (VCU) who walked up. So Bryan nudged the laptop over, Autumm joined in, and one of her colleagues I only new from his twitter handle as @kayakpete joined in.

Because there was not much going on after, we had time to talk, and as the conversation was really flowing well, this session ran longer than others. In the Vconnecting Slack we’ve had some talk about the proper length of sessions, and also why this one seemed to go so well. To me, that’s the informal part of the way conversations go, but of course we want to think about why a session feels like it went really well.

For this one I would chalk it up to unknown percentages of Bryan as a personality, the number of people present, the flow of people in and out of the conversation, and a good free form flow. There are no planned topics in Vconnecting, it is not a presentation, it’s conversation. 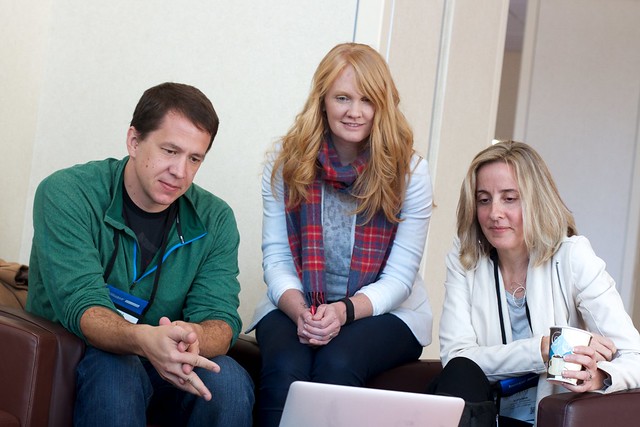 I also got to be the onsite buddy for the one Thursday Morning (Oct 29) with Amy Collier and Kristen Eshleman. This one too ended up being a long, active conversation, again because of having great guests on site and in the hangout (see the writeup by Rebecca Hogue for a great storify of the action).

Mandy Honeyman, already a Hangout Pro, aced it in her first time running a Vconnecting session. Maha Abdelmoneim was back for another day, and started a great discussion on World of Warcraft status screens. A number of virtual people Cristi Motx and Chris Gillard were at dLRN with Amy and Kristen, and wove a great strand of talk that bridged the experiences, but also drew in others who were not at that conference.

I wandered again in the middle to talk to people, take photos, and I liked how Tom Woodward felt comfortable just joining in and contributing greatly (as he does).

I cannot put a rating on it, but this one too was really powerful, longer in length, inclusive. and felt good in so many ways.

We’ve been bantering again why these sessions felt so strong (not that others were not), but the energy level was high, we had full hangout rooms and more than a few people appearing on site. 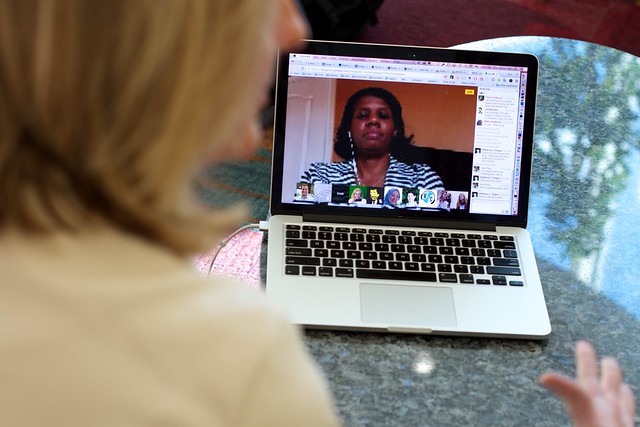 Maybe there is no formula.

There is something that others have been pointing out- this began really to help bring this part of the conference experience to Maha Bali, who being in Egypt is rarely able to attend conferences in person. So yes, on one level it’s for bringing the conference experience to maybe 10 people who are not there. But also, there is a real benefit for those who come together for 30 minutes on site, I got so much out of listening to Amy, Kristen, and Brian, and there is a connecting that happens there as well.

Stay tuned, I am doing more of these soon from Vancouver for the Open Ed conference. There will be good Vconnecting from there!