Muchas gracias to the people who commented or messaged me about the 15 minute EDUPUNK retrodocumentary I produced for a presentation this week at the University of Guadalajara.

As it turns out, we played only the first few minutes (up to the Quincy re-dub) as (a) it was too long and (b) most of the video would likely be lost on our audience of mostly graduate students here in Mexico. But often as ds106 experience goes, when the idea to produce something get’s lit, there is no extinguishing it.

This was pulled off in about a week; between a quick interview one take set in Brian Lamb’s office at TRU, to having he and his son do some audio for the Quincy re-dub, asking Tannis Morgan to do her Quincy audio during a JIBC visit later that week, and nagging jim Groom to send a clip from Italy. 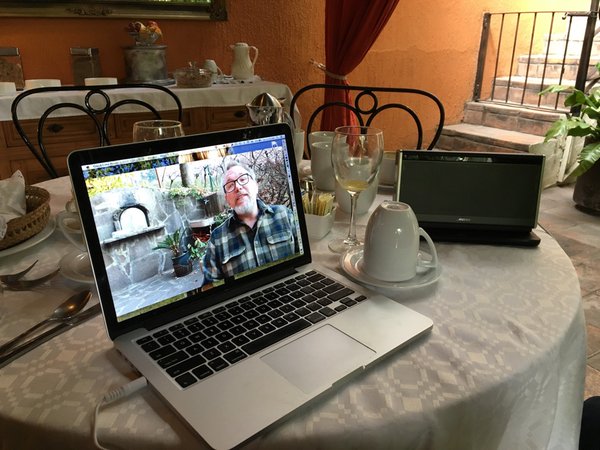 This is some of the extras, but after showing Brian the full clip that Jim sent, I felt it was worthwhile to share the full interview bits, and some outtake snippets from the audio.

I have to admit, I am pretty happy with the way Jim and Brian’s parts play off of each other; this was totally done without a script. You should get a sense as to why these two work so well together. Most everyone seeing this has remarked how “zen” like Jim looks on his Italian patio, and as much as there is playfulness in his most bava-ish presence, I totally see that this is so pure in his heart.

And getting a video comment from guru Andy Rush means a lot:

A masterpiece on EDUPUNK from @cogdog. I think I first saw @jimgroom & @brlamb at CBGB's – https://t.co/HB1XDcioHN

While I have yet to step up to Final Cut, Andy, I am pretty proud of what I continue to be able to do with iMovie. This is a case, where I can certainly build / host my own sites, at times I use Wikispaces for web projects, that I like to create using the same tools available to teachers.

In each video project I push farther into what can be done in iMovie; this time I spotted how I could use an overlay video track and set its transparency to overlap content. I also have fleshed out some tricks for using the Ken Burns effect for more than swooping over photos (the tutorials may have to wait until I start teaching ds106).

This was not meant as a how to post, but more of an appreciation for the opportunities to do this kind of work with Brian and Jim.

Pure in my heart too, pure.