Get it [posted]. Take chances. It may be bad, but it’s the only way you can do anything really good.

I never expected to be blogging about EDUPUNK, much less presenting on it. But the folks running the CIINOVApp conference here in Guadalajara asked me and colleagues Tannis Morgan and Brian Lamb to bring it back (we are here by invitation from the University of Guadalajara a week before our UDG Agora Project events).

It can be a bit of a North American perspective to say “that’s over and dated” because there are continued sparks of interest in EDUPUNK in Latin America, less caught up in the punk music metaphor than the spirit of DIY.

You an find our presentation and other materials delivered again via a WordPress Not a Slide Deck site at http://udg.theagoraonline.net/ciinovapp/ — we took a 3 way approach with Brian doing a bit on the history and background on EDUPUNK, Tannis brought in an interesting alternative metaphor based on the Bauhaus movement, and I did a bit of play on DIY as going from Do It Yourself to Do It Ourselves.

I got this silly idea in my head a few weeks ago that would not go away. I thought it could be fun to have as an opener a short video trailer, like a bit of a mock documentary.

Somehow that grew into a bit of a more monster, one that had me up til 3am for a string of nights last week, because video production for me is a huge adrenaline rush.

Sit back and enjoy (or fast scrub through) EDUPUNK de dónde viene y hacia dónde se dirige ahora (Where it came from and where it’s going now).

We only show the first bits up to the Quincy Punk Rock episode remix (Thanks to Brian for keying me to the original clip. Because I got to visit Brian at TRU a few weeks ago, he did an impromptu interview clip (we had a 10 minute window, I did not even have time to prop up my iPhone, that was hand held). And Jim Groom sent a clip for his interview segment from his Italian villa. 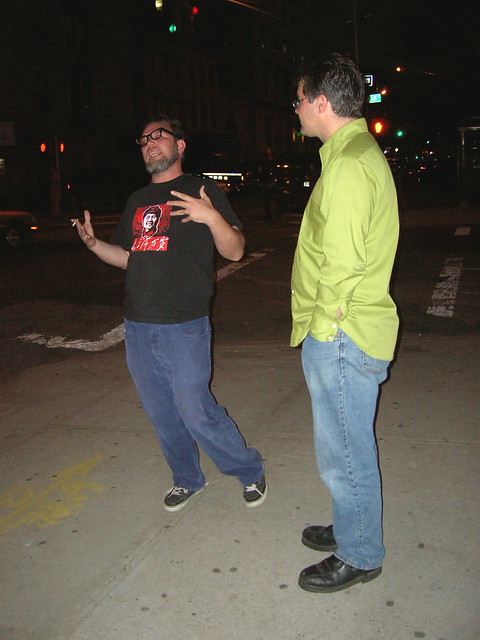 flickr photo shared by Keira under a Creative Commons ( BY ) license

Brian played the part of being nostalgic for the change the world spirit of EDUPUNK and Jim did the part of looking back it with a bit of bad taste for the way the spirit got mis-appropriated (was there acting or not?).

When there is more time, I might publish the original clips again; some great comments got trimmed.

The background punk band clip is none other than The Clash; I found a great clip from a 1977 concert in Munich. Music used was Adelantado Mental by Los Margaritos found in the Free Music Archive.

While in B.C., I got some folks to record audio for the re-edited Quincy Remix clip- That’s Brian doing a gravelly Jack Klugman, Tannis as the concerned woman, and Brian’s son Harry did some of the punk kid voices. If you like silly remixes, here is just that clip:

I envisioned the video being done in Spanish, and on extremely short and ridiculous notice, the translator who helped during my July Agora Workshops, Jorge, not only translated the narrator parts, but recorded audio for it in Spanish. He also translated the English lines (I did not have time to add them to the video, yet).

This one went so far, it probably ends up being more inside humor for my friends that were part of it. But once this idea had planted seed, it would not go.

I had a bit of fun too with the presentation where we wanted to toss out some examples and ask if it was EDUPUNK or not. My hope is that we might get to a point to say it does not even matter. But there is at least now an analytical device: 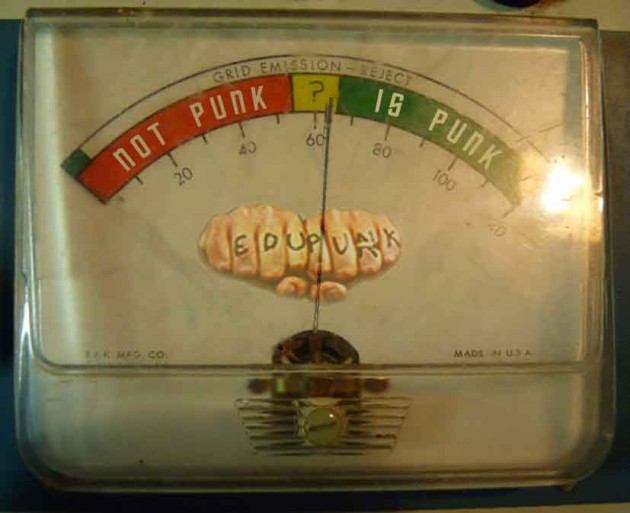 So what is your EDUPUNK meter reading these days?