Based on his extensive travel ,y colleague and good friend Bryan Alexander what he calls an “iron law”:

Frequent travelers know what hotel internet connectivity can often be frustrating. But I hit upon a principle, many years ago, that lets us understand the connection between hotel and WiFi.

I called it Alexander’s Iron Law of Hotel Connectivity, and it runs like so: the more expensive the hotel, the more costly and/or lower quality the internet. The reverse is also true: the less expensive the lodging, the cheaper and/or better wireless.

A guy with an axe and that much experience can be confident to declare iron.

From less data and confidence I am offering up my own law, my not quite sure of an iron rating, hence aluminum. Sharing photos and attributing the people who share them is one of my longer running compulsions. We should not be vigilant about attributing media sources to comply with some law, we should do it because acknowledging and appreciating the sharing of others is (well to me) one of the most important ointments in the internet machine.

Hence my own diligence is using and giving credit for images in all my works. Hence the reason for building my own attribution maker for flickr creative commons licensed photos.

Hang on. As I travel the net, I see often, though not nearly as often as i like, that individual bloggers I read make a solid effort to cite their image sources. The exact way you do it does not matter as much as the effort. To me a good attribution out to name the person whose photo you used, ideally the license, and link back to where you find it.

Not when I look at many news sites, media hubs, places that I assume actually have a staff to produce their content, I feel like I see lot less credit given.

Well, I saw it twice recently with my own photos, that’s two data points! So, with somewhat of a hat tip to Bryan, I offer CogDog’s Potentially Iron Law of Photo Attribution: “The bigger the organization the publishes a web site, the shittier the attribution is they provide for photos.”

I’m not even talking about the ones that don’t bother, but that when they seem to make an effort… well it’s done shabbily.

@cogdog – Is this your image under the first heading, or is it a different Alan Levine? https://t.co/Ex4s8XDrk3

He links to an article from MSN poop piece 10 work mistakes to avoid first thing in the morning (don’t even get me started in the crap-o-mania that is listicles).

It takes me like 60,000 times faster to recognize that first photo- it’s my watch on my hand for sure. 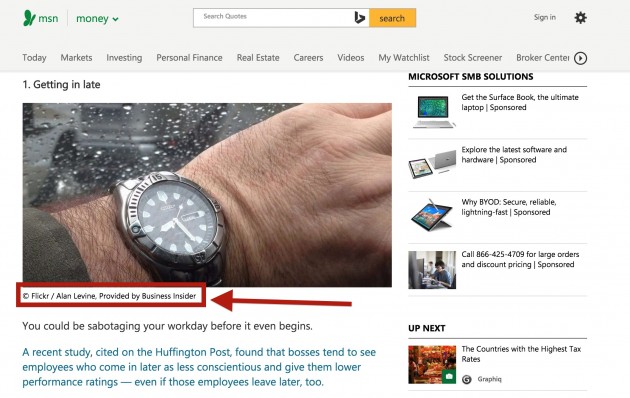 Okay there is an effort at attribution. It credits me by name. That’s it. It says &copy; Flickr which is false, the copyright belongs to me, not to Flickr. It says Provided by Business Insider — I don’t even know what that means.

What does it say that a major media publisher like MSN cannot even get the basics of photo credit correct? 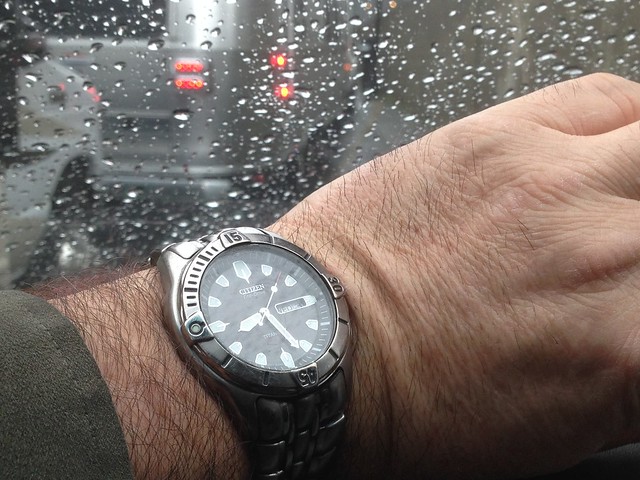 AH, every photo is a story. Does Business Insider have a story about this photo?

That’s not just a picture of my watch, but within 6 seconds of hitting Pi day last March a photo taken at 3/15/26 9:26:53am. And I can remember from rain that it was the day I left Victoria on the end of a 5 month visit in Canada; I was in line at the ferry terminal.

So MSN, how about a lesson in Creative Commons? Flickr does for some reason use the 2.0 version of Creative Commons licenses, but that’s another mystery. Let’s read from the textbook:

Attribution — You must give appropriate credit, provide a link to the license, and indicate if changes were made. You may do so in any reasonable manner, but not in any way that suggests the licensor endorses you or your use.

I’ll leave it as an exercise for the reader to example the attribution provided on the MSN site if it meets the license requirements.

But whether MSN followed the letter of the license is not my pursuit (I spent a few days as an Attribution Cop and resigned). In the past when I have brought it to a web site’s attention, sometimes they respond by switching out my image for another.

Well one time Australian ABC News actually did respond and fix their attribution of my photo of an ugly load of bread.

The point is an organization the size of MSN should have the capability to provide a decent attribution statement. IT’S NOT THAT HARD! But the real harm they do in my book is set a poor example for others.

My second example is another one of my photos that appeared in an Edsurge article a month ago MOOCs in 2015: Breaking Down the Numbers. 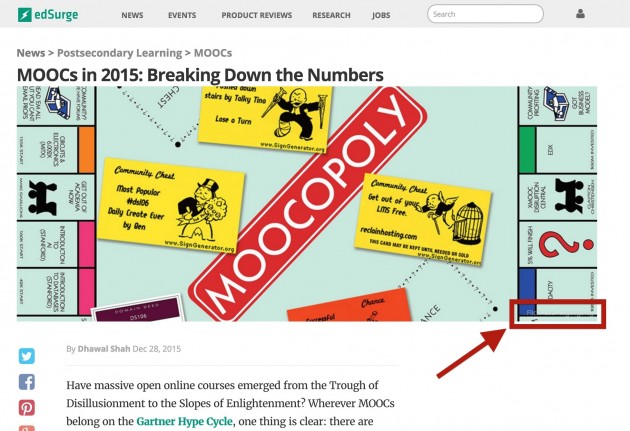 This game is harder than Where’s Waldo.

If I had not highlighted the location of the attribution I doubt anyone in the universe would ever find it. You have to zoom in to about 180% to make out light grey text that reads “flickr user cogdogblog.”

If you do manage to that, or click errantly, it does take you to the flickr page for the photo. Well, not exactly the source page, it’s the entry for the large size version of the image.

How hard would it be, Edsurge, to do something like this? It took about 8 seconds with my flickr cc attribution helper tool. It probably took you longer to embed that craptastic invisible CSS layer hiding over the bottom 0.2% are of my photo. 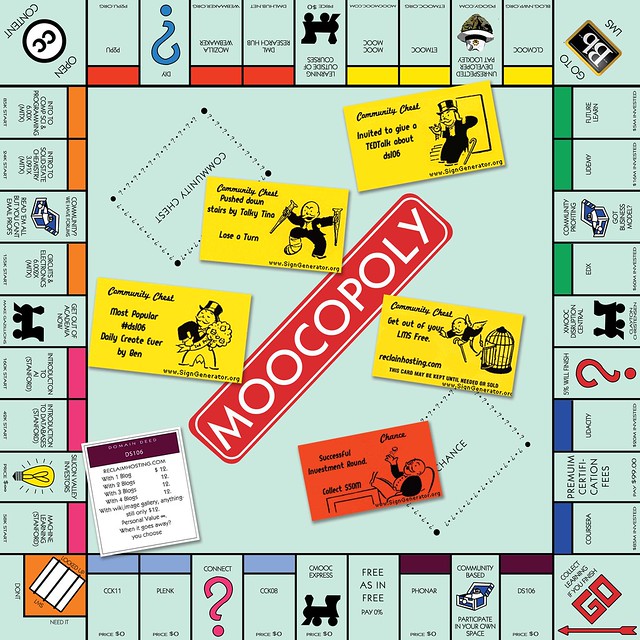 I have to admit this one is a favorite in my MOOC Mocking genre. There’s a story… I was visiting my friend David Kernohan in the UK, and his young son Ben, who enjoys the DS106 Daily Create asked if he could writea challenge. Of course so, we used it for TDC 846:

Design and draw your own board game about ds106

I went a tad overboard in redoing the Monopoly board, and blogging about my work. That photo got like 15,000 views and was selected for Flickr explore. I put some effort into it, because I enjoy the ac of creativity.

Edsurge did a search, plucked my image, and provide a means of attribution that is more joke than credit.

Here’s one I found a while ago. Read Time and You was published on medium by someone that works for medium.

As a photographer, I was taken by the brilliance of the eyes of the girl and the cat in the cover photo, it’s a great photo. 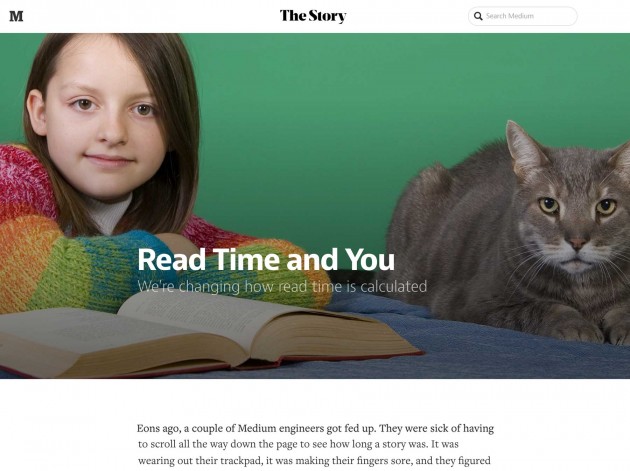 Fantastic photo, not a scant of an attribution credit

There’s no caption, no post script to the article that provides attribution.

Where is this image from? Who is the brilliant photographer? Out come the detective tools. A reverse image search in Google on a screen shot ties it back to the medium article and a blog post Why I Ask My Kids to Read to My Cats. I did not read for the anwer, by this blogger does not provide a source either.

But the image URL, uploaded to the Catster blog provides a clue in the file name:

Using this as the source for a reverse image search finds more: 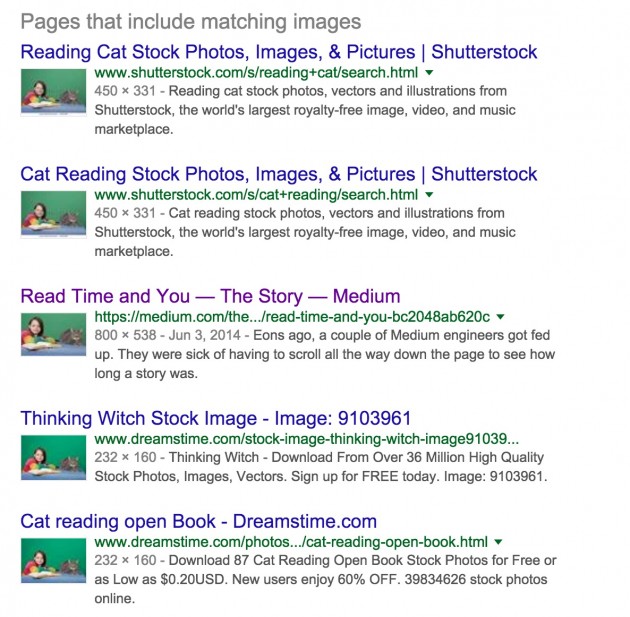 reverse image search on the cat and girl photo

Yep it is an image that comes from Shutterstock, and specifically a photographer who puts her photos there, Nancy Catherine Walker.

Now I am not accusing The Catster blog or medium of wrongly using an image. They may be Shutterstock customers. I am not sure how Shutterstock works; their license says that an attribution is required for use in commercial products or “an ‘editorial’ context” (I have no idea what the latter means).

And so this is where the thing about licenses is aimed at the wrong place. People make their decisions based on some interpretation of law and whether they will get in trouble or not. So people who use Public domain content, or maybe stuff Shutterstock says they are not required to give attribution, and say “I don’t have to give credit by the law so I won’t.”

This means for any reader, student, citizen of the of the internet world figures out when they see a Medium article or a cat blog post that uses other people’s images “They don’t give credit, why should I?”

Do not give attribution because it’s law, do it because giving someone attribution is a nice thing to do, it is a way of saying “thanks” to me or you or Nancy Catherine Walker. Imagine a world where it was more rule than exception.

I doubt they would ever hear this, but if the folks at medium somehow took up this view they could cause a huge change- they could make a caption credit a requirement on image uploads, rather than an option.

In some small modification to their software they could generate a tidal wave of photo crediting. They could make medium.com a site that models the attribute of attribution.

That’s an Iron Law for sure.

I’ll keep attributing because (a) it’s an act of gratitude that is deserved; and (b) it’s frigging easy. Just make it your habit.

Top / Featured Photo: That’s a photo I took of my friend Bryan Alexander during a visit to his Vermont mountain home in 2011, he does like swinging an axe (at wood, it’s all about the wood!). When I was there a few months, ago, we had a fine time talking and chopping. This flickr photo by me http://flickr.com/photos/cogdog/5682147591 shared under a Creative Commons (BY) license