Serendipity would have no magic if it did not sneak up on you and lovingly whack you on the side of your normality.

On a beautiful Saturday when I ought to be outside playing in the fresh snow, I am instead pounding away at this #%$*@ keyboard working on web sites. Finally, after getting a little bit done, I peek into the twitter screen, and get maybe the best possible message a teacher can get.

@cogdog i was in your class (as @krisavball08). I made a video using my #ds106 skills for my class & hope ull share! https://t.co/FA0oIZKfOJ

Karissa was a student in the last DS106 course I taught at University of Mary Washington – an online section I taught in the Spring of 2013. She was a memorable student; studying to be a math teacher she came in with a lot of talent and energy.

Her blog (now retired, but because of Feed WordPress we have an archive of her work) had a clever title and theme (and URL) Confessions of a Future Disney Princess 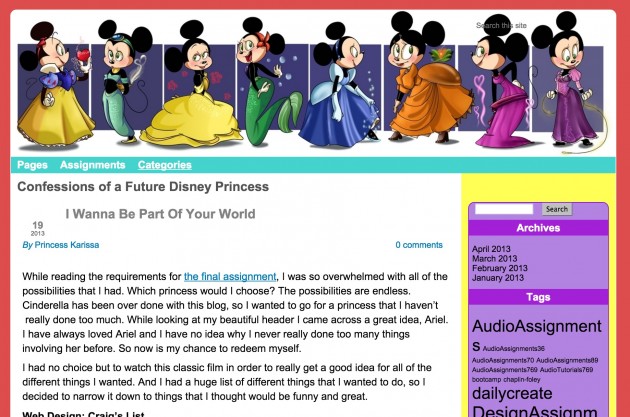 She wove her love of math with the unlikely pairing of her love of Disney Princesses, naming herself Princess Karissa. I recall even then her audio and video work showed her talents that have gone even farther as shown in the video she shared today.

There was a Calculus song she did for the Audio unit, and like the great students she was, a full writeup on the production.

In someways I’ve felt the worst time to assess what a student learned is right at the end of the course- what you get is a short term memory / experience dump. To me, the most important assessment is something teachers cannot do; it falls on students. And that is to find out later in life what they are doing with their education.

So it’s 3 years now since Karissa started as a student in my ds106 class, and she felt motivated to (a) remember by twitter name and (b) share the creative work she is doing now in her role as a teacher herself.

There’s only a bit I can take as a credit. Karissa was a great student, motivated, creative, and she took what I gave, but that’s as much, or more, credit to her than me (as if we can ever figure out that complex function). 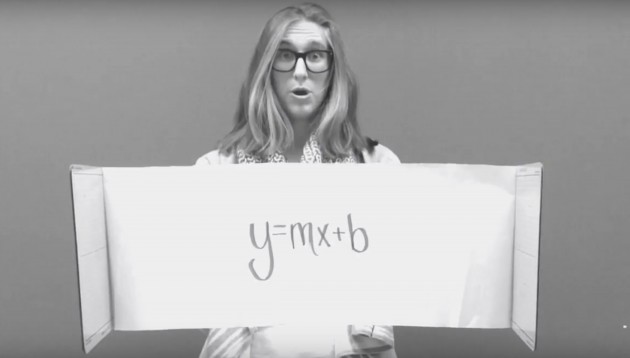 Has y=mx+b been so clearly explained?

Thanks Karissa, for reaching out, and for using your talent and energy for your math students. This is totally +memorable and the best gift I could have gotten.