If the web was designed for you, then you might never enjoy the Museum of Endangered Sounds. But because much of the web is designed by us, we get gems like this that are weird, quirky, open to all and has a personality of it’s own.

This site exists because someone like Charles wants it to exist.

Right at the intro (below the exhibits) we get jagged pixelate font, and the fact that the creator of the site has (and publishes) his own AOL address? Priceless.

Brendan’s description does it better than I could do, and says a lot about the spirit of the Open Web.

I launched the site in January of 2012 as a way to preserve the sounds made famous by my favorite old technologies and electronics equipment. For instance, the textured rattle and hum of a VHS tape being sucked into the womb of a 1983 JVC HR-7100 VCR. As you probably know, it’s a wonderfully complex sound, subtle yet unfiltered. But, as streaming playback becomes more common in the US, and as people in developing nations like Canada and the UK get brought up to DVD players, it’s likely that the world will have seen and heard the last of older machines like the HR-7100. And as new products come to market, we stand to lose much more than VCRs.

Imagine a world where we never again hear the symphonic startup of a Windows 95 machine. Imagine generations of children unacquainted with the chattering of angels lodged deep within the recesses of an old cathode ray tube TV. And when the entire world has adopted devices with sleek, silent touch interfaces, where will we turn for the sound of fingers striking QWERTY keypads? Tell me that. And tell me: Who will play my GameBoy when I’m gone?

These questions and more led me to the undertaking that is The Museum Of Endangered Sounds.

My ten-year plan is to complete the data collection phase by the year 2015, and spend the next seven years developing the proper markup language to reinterpret the sounds as a binary composition.

If you don’t understand my passion and the significance of my work, you probably never will. But if you do, then you’ve come to the right place.

Oh my, “Imagine a world where we never again hear the symphonic startup of a Windows 95 machine.” Imagine, indeed.

The site does what it says, you click the icons and hear the sounds of old technology. They just loop and loop and loop. What is fun is that you can click multiple ones and now the web page is some kind of bizarre instrument.

My best surprise was when i went to add it to my pinboard, it was already there!

The Web Designed by Business Executives would never have room for Charles, nor for you, nor me to put our personality out there. 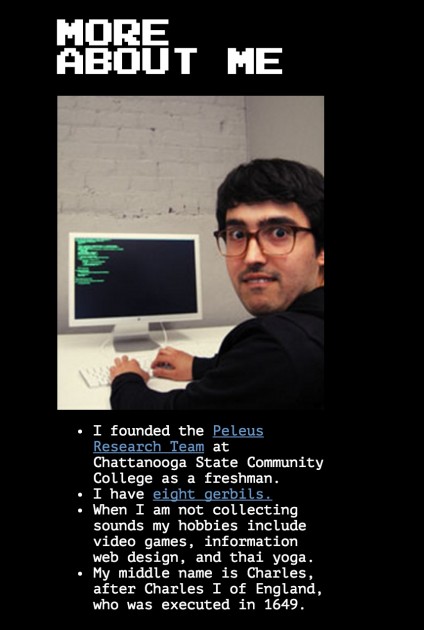 (Yes I did click the link, Charles does have eight gerbils).

Keep the web weird and open, as a place with potential to grow stuff we as individuals can never imagine it all. That is a sentiment that hopefully not appear in some future Museum of Endangered Idealistic Dreams .

“Imagine a world where we never again get to create our own digital spaces unfettered by corporate control.”