There is so much to like about this play on the final shoot out scene from The Good, The Bad, and the Ugly– the unexpected insert of the cat is a grand example of messing with reality, putting in what is out of context, but making it fit in. The transition of the cat’s eyes is spot on.

Amy’s tweet has no context, it’s just the lovely GIF. What we know of her (from her profile) is:

Do not wait to strike till the iron is hot; but make it hot by striking. – William Butler Yeats // entrepreneurship + design + life + chairs + books
Philadelphia, PA

Her website? It’s tips for business “bootstrapping” and a 7 Point guide For Kicking Ass at the Product Biz.

I am just describing what I see there- but of course, because it’s a tweet with a single GIF, do we know if this is something Amy actually made, or just is something she found elsewhere? Nope, it just whizzes down the twitter stream.

This matters not. But when I saw it this morning, that little cog starting moving in my brain “The cat is cute, but what if I inserted a dog?”

I downloaded her GIF from Twitter (which means I get an MP4 movie, hurrah). In Photoshop, I use Import Video Frames to Layers Under File -> Import. I use the option for every 2 frames, since it’s only 5 seconds long. I get about 4 frames each of Blondie (CLint Eastwood), Tuco (Eli Wallach), and Angel Eyes (Lee Van Cleef); I remove one to get the most eye shifting.

And I remove the cat. Sorry. No offense. 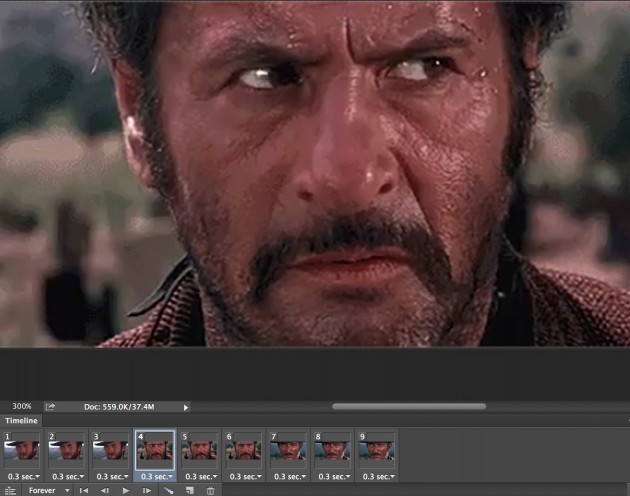 I looked in FIPHY for some ready made gifs with shifting dog eyes, but did not find anything good. So I went to Youtube and searched for “dog shifting eyes”. The one that worked was a clip from a BBC Earth show on Puppy opens its eyes for the first time – Puppy Senses – Secret Life of Dogs.

The segment that worked is the puppy’s eye moving slowly at 2:06

I downloaded the whole clip and used MPEGStreamCLip to extract this 2 second sequence. I did the same Photoshop Video Frames to Layers input. It was about 40 frames, and I reduced it down to 8 frames.

But the eyes moved the wrong way, from left to right, and to make the sequence work, I needed them to move right to left. Easy Peasy, I just reversed the frames in the Animation palette. I also cropped the scene and resized it to be 600px wide. Copy all the frames, and then back to my Good Bad Ugly sequence, pasted the copied frames in after the last one.

Running this ones at 0.15s worked to match the motion of the 3 dudes, but als, make the puppy’s sequence seem a bit longer.

I’m kind of happy with the final GIF:

The cat is a bit more out of place, but hey, Because Dogs. And that puppy is adorable (better Puppy than Ugly, eh Tuco?)

And so here, it has taken me longer to write about how I made the thing than it took to make it. But this is so important, IMHO, to the way we approach DS106— it’s not about making media and pumping it out into the stream, we encourage this kind of narration of the Making Of the media, the background, the DVD extras. It’s not just an exercise in writing a tutorial.

Yes, on one hand, it might help someone else learn a trick or an approach. Yet I think there is more- in the retelling of the making, I get to reflect more closely on what I did, how I went about it. Explaining it is for other people, but as much as a reflective practice for myself. I almost re-do the making, and often think about what I might have done better.

I do not expect a lot of folks to get this idea. “I don’t have time to blog” they say in Facebook.

Too bad, because I think you are missing out if you are not narrating your work.

UPDATE: Mar 14, 2016 I have no way of knowing if Amy Hoy created that GIF, so I just started with some googling “good bad ugly cat gif” and found the same GIF posted to imgur March 3 by a username VideoCoin

All of this stuff is context-less, so it’s just floating out there. This is the stream-mode mindset.

Top / Featured Image: All I wanted is a photo of a dog wearing a cowboy hat, and a photo that was licensed for reuse. A Google Images search came up pretty dry, but I saw a few more in compfight. One had a calendar in the upper corner, and was licensed ND so I could not remove it; 2 others looked good, but they were portrait orientation, and also being CC-BY-ND I could not really edit to put it on a black background.

I settled on a flickr photo by xersti https://flickr.com/photos/xersti/282975968 shared under a Creative Commons (BY) license. I cropped the dude and the woman out, and put the dog in a landscape oriented black background.