On Wednesday I was a digital participant (nod to Laura Gogia) in an OLC Innovate session on Meeting the Potential of Hybridity: Access, Equity, and Inclusion.

Planned and carried out by VConnecting (see that, Maha?) colleagues, the session was not focused on Virtually Connecting, but informed by what is now a year of experience. We were suggesting potential ways conference activities could approach perhaps a higher state of “hybridity”:

The co-presenters in this panel have been experimenting with alternate modes of hybrid participation to help overcome these barriers to conference equity. In our model, the onsite and virtual experiences of a conference merge into something more inclusive and equitable. The model involves using free technologies that work well at low-bandwidth and allow conversation to flow both ways, instead of a simple broadcast. The additional voices of those present via virtual access often help to challenge dominant discourses by providing richness and deeper understanding to discussions of research. Furthermore, virtual participants lack access to what is often the richest part of a conference experience– the conversations that take place between sessions.

As little as 2 weeks ago, in hangout meetings and google docs and Slack we were still batting around ideas on how to do this, borrowing somewhat from an “empathy” activity tried last fall at dLRN.

Thankfully Rebecca Hogue stepped in and by simplifying the ideas strengthened the session. A lot of the success of the workshop session stems from that move.

Onsite in New Orleans, in what looked like one of those shoebox shaped hotel conference rooms, along with Rebecca, was Autumm Caines, Whitney Kilgore, Andrea Rehn, and Patrice Prusko. Joining, first via a single projected Google Hangout, was myself, Maha Bali, and Apostolos Koutropoulos (a.k.a A.K.). Each of us virtuals got a chance to talk about our reasons for being virtual conference attendees.

We then moved to table groups, the participants in New Orleans choosing which “Virtual” to join. And each of us virtuals were paired with someone onsite (I was with Andrea), and at our tables we connected by separate means with the folks there. By the way, I think we all used different technologies here- I used Appear.in, I think A.K. did Skype, and Maha maybe used Zoom. The specifics do not matter, but if you want a metaphor, we were all in separate digital spaces.

FYI, for my setup I used two different laptops, as I have experienced challenges when two different apps are fighting for the video camera on my laptop: 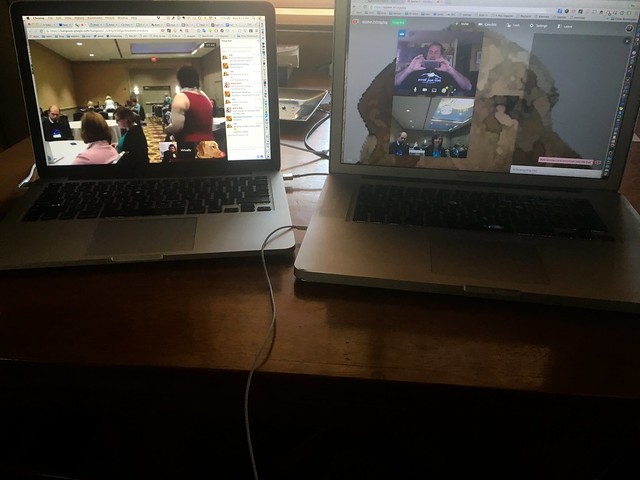 There was a bit of unknown with how the acoustics in the room worked out, but there was enough distance that each group could engage in a conversation with more or less one of us sitting on the table in a laptop (Andrea did a marvelous job spinning me around our table).

Half of the conversation was for us Virtuals to share specifics of what participating virtually as like, with the idea for those present to understand and empathize with the remote participating experience (many but not all had experience). I used a lot of my experience just the day before doing VConnecting for the OER16 conference, talking about time zone differences, some tech challenges with video stream, what our VConnecting experience did to bring the energy between the sessions.

And the second part was for the conversation to suggest some action items that would help conferences be better hybrid experiences.

The idea was that someone there at the table was taking some notes in a shared Google Doc, and it was not just my experience “on the table” as others talked about challenges such as “the distraction of work” not stopping, finding a quiet place to participate, and of course, technical challenges.

I forgot who at the table (Phil?) mentioned how when the experience really works, much of the technology interface “vanishes”. I find this as a resonating point; it’s what happened in this session, at least I can say that the conversation was so rich the notion of “Face to Face” / “Virtual” as a boundary did vanish, although they were in a room and I was just a face on a laptop. There were a lot of meta photos: 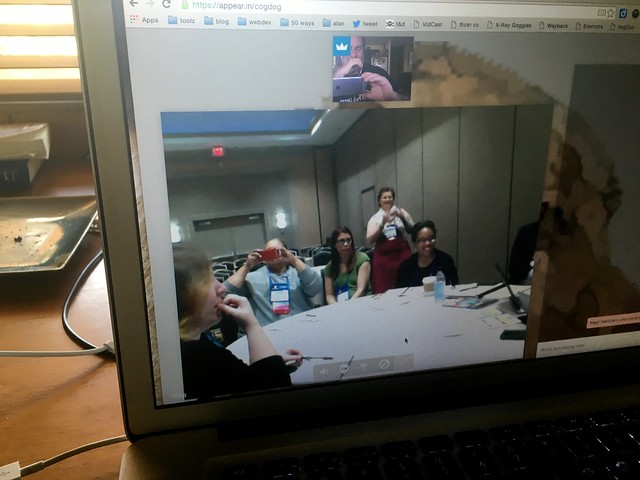 One thing I brought up, and I pay attention to a lot now, is how the energy in a room feels to me in a session; most are familiar with the feel of a dull presentation or meeting versus one where you are revved up in doing things.

Something else came during the talks, about how so many of the small connective bits, add up as we have more opportunities. I think it came as I met the people at the table- there was (excuse my name forgetfulness)? John? from University of Queensland who I may have met through Phil Long (he mentioned it); Julie who I met for the first time; Harriet Watkins who I met two years ago on a visit to UT Arlington (she’s a dynamo, I’m a big fan), Michelle Harrison who I worked with last year while at TRU, Phil Densman who I am sure I crossed paths with on twitter, and (oh I forgot her name too) but a woman who works at Harford Community College, outside of Baltimore where I grew up, and so I could relate the few months I lived out near Belair…

Then there was the best part, something we could not have planned or predicted. Because we had tables report out, and the three os us where in our separate video laptop windows, our onsite “buddies” carried us around to get close enough to the reporting table to hear.

It was almost comical, as at a glance, we look like disembodied heads in laptops:

I think it was right before this as we were moving the table shown in the photo, that Maha and I “bumped” into each other: 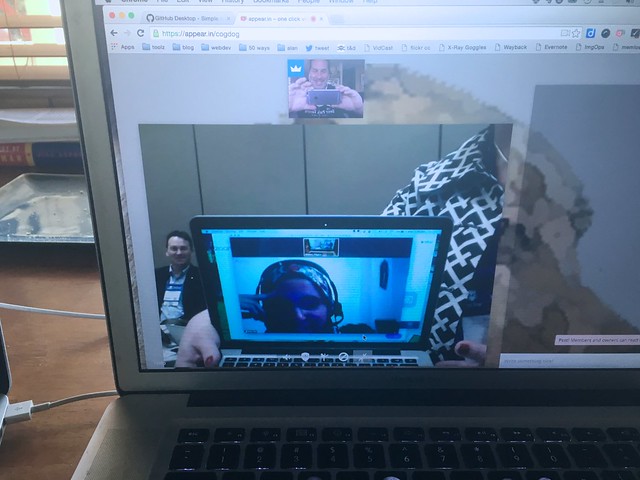 So, I am in an Appear.in session carried around by Andrea, and I can see and talk to Maha, who is in a Zoom session being carried around by Whitney… and yet we are all together laughing and collaborating in a room in a conference facility in New Orleans.

Is anything vanishing? Heck yeah. Check out Maha’s reflection on the experience; she just wants to sit at your table, hybrid-ly.

But I agree that the best technological connecting experiences are ones where the tech fades out of the way. And not only fading the tech, but a fading of the endpoints of “Face to Face” vs “Virtual.”

I really want to thank not only my great presenters, but everyone at OLCInnovate who ventured into this session.

Top / Featured Image: Sometimes finding the image is the part of blogging that takes the longest; not exactly the case, but with some idea of wanting to write about the blurring of boundaries, and did some fruitless searching at compfight and Google Images (With license to reuse as a filter) on “blurred boundary”, “vanishing boundary” even just vanishing. Of I guess there were ones I could use, but generally I wait until an image talks to me.

This image was more scrolls than I usually do down the page from the Google Image search on “blurred boundary” – I liked it for the group of people in various poses of observation and taking photos, one person pointing, and the surrealistic figures inside the screen. Or maybe I just got tired of scrolling.

Anyhow, this is a Creative Commons Licensed image from Wikimedia Commons, posted by the artist who made it (Maurice Benayoun), of an interactive art piece called Tunnel Under the Atlantic.

Thus the serendipity happens, as I search for the art piece and find a description on Benayoun’s site (missing in Wikipedia, should I do something?). The idea was to simulate a possible tunnel allowing communication between people in Paris and Montreal:

The Tunnel Under the Atlantic, televirtual art installation, established a link between Montreal and Paris, two towns physically distant by thousands of miles.

The Tunnel enabled hundreds of people from both sides to meet. From each side, a two-meter-diameter tube, made us think of a linear crossing of our planet, as if it were dug under the ground, shouting up in the middle of the Contemporary Art Museum in Montreal on one side, and in the lower floor of the Pompidou Centre in Paris…

Free from the physics constraints, Space then is a function of Time. There, speed is not the best way to speed up the meeting, but a way of specifying everyone’s position within information. The Tunnel architecture created by each visitor determines the editing of the picture in the time of their moves and in the built space.

How did I stumble into what feels like more than just a visual metaphor (for the post not yet written, this end photo description is what I write first, and now is turning into a blog post of it’s own).