This kind of small act of near random #ds106 connection will not increase enrollments, will not “fix” education, will not improve institutional metrics… yet I just cannot let it slip by without a small “wow”.

And the ironic thing is that the tweet in which I saw it came into my view about 5 minutes before I had to jump into a video call to Cape Breton University by invitation of Grant Potter. I was asked to say some encouraging things about openness to a faculty group there.

While I am still musing on the takeaway from Catherine Cronin’s OER16 keynote caution about “amazing stories” not being enough to convince people to share openly… I did so anyway because I do believe we have a case to make about shifting teaching to a place where the audience is more than the teacher giving out grades.

But let’s rewind back to a #ds106 Daily Create from January 25, 2016, when I was still casting most of them in a western theme. In consideration of feedback I heard about westerns being such a male dominated genre, I had been looking to find female western figures, but in fiction, history. I cannot remember the exact search path, but I was rather jaw dropped in reading about an early 20th century rodeo bronco riding star named Bonnie McCaroll:

Bonnie McCarroll, born Mary Ellen “Dot” Treadwell (1897 – September 29, 1929), was a champion rodeo performer and bronc rider most remembered for her death at the Pendleton Round-up in Pendleton, Oregon. She also excelled in steer riding, bulldogging, and automobile jumping.

In 1915, her first year of rodeo competition, McCarroll attracted national attention from a photograph taken of her being thrown from the horse named “Silver” at the Pendleton Round-Up. In her career, she performed before kings, queens, such dignitaries as U.S. President Calvin Coolidge, while he was vacationing in the Black Hills of South Dakota in 1927, and before countless rodeo fans worldwide. After her death, rodeo officials instituted safety regulations and eliminated bronc riding as a women’s sport.

This fantastic photo is what caught my eye and landed me in that Wikipedia article: 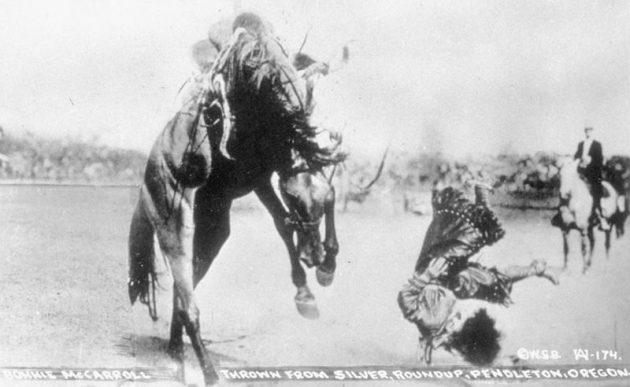 For some reason, 93 days after Ron tweeted his response, someone replied:

@ronald_2008 @ds106dc I sculpted her in bronze https://t.co/BqKrHkAMbP if you would like to see it

Ann is a bronze sculpture artist from Bridgeport Texas who specializes in works depicting cowgirls (see her web site at http://annayresbronzes.com/).

It’s not a total fluke, I would guess Ann does some regular searches on the figures she uses in her art, but still, here we go again, with an unexpected connection, however small, generated because Ron shared his art in the open.

It would not be possible without an open web.

Keep that in mind was other mega entities are praised for “eating the internet“.

Thanks Ann for finding out little corner of the web.

A screenshot of the sculpture “Bonnie McCarroll 1915 Pendleton Round-Up” by bronze artist Ann Ayres, from her web site http://annayresbronzes.com/