It’s been more than a year since I ended a fellowship at Thompson Rivers University where Brian Lamb and I cooked up our SPLOT concept (what the SPLOT? See ’em at a lovely short URL or see the presentation we did at OpenEd 2015.

They have been bubbling up slowly seeds of interest and people are actually using them in their courses, which is both exciting and a tad nerve wracking. Oh well. I do miss all the colleagues I worked with who got to hang out this week at the BCCampus Festival of Learning.

And when I checked out the site, it was nice to see that he had cleverly deployed one of the least used SPLOTS, the TRU Sound Collector. Like the Image Collector, which it was more or less spun off from, it offers a way for people to share audio content in one place.

WHat was different in this one is that people can upload mp3 audio files, but they can also add sounds via a URL to any mp3 sound file or anything in Soundcloud… the theme just embeds them as players. 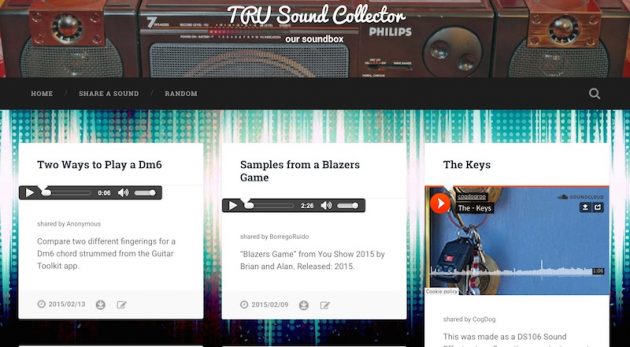 But what Brian et al did was an interesting way to deploy these media collectors – by making the front of the site a static page, he made it a workshop platform with all the materials, and the sound sharing was one functionality within.

It looks like a Reese’s Peanut butter cup combo of the TRU SoundCamp and the Sound Collector SPLOT… two great audio tastes.

But when I saw the new site, it also reminded me that this SPLOT had never made it to GitHub, so there was no chance anyone could even use it… that was rectified tonight a bit hastily, but now this theme is available to the 0.2 people in the world that might need such a thing: 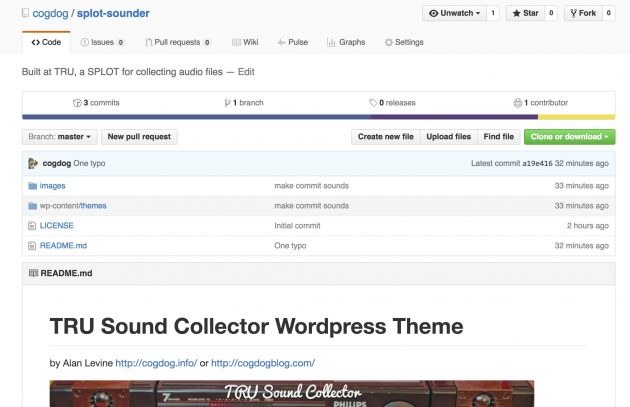 So there it is… barely tested, and maybe chock full of typos, but now totally forkable.

Sounds good to me….

Top / Featured Image: flickr photo by me https://flickr.com/photos/cogdog/11005301803 shared under a Creative Commons (BY) license