Some stories, films end so neatly, clearly understandable, leaving me not much to wonder. Others are so dense, artsy, deep, complex, that I’m left stunned, shrug, and move on.

Between these two sides of a canyon, is a valley where the story does not wrap so neatly, but leaves the brain gears churning. The story is eaten, but it keeps rumbling around my brain’s digested system, questions not full answered. In a play on a nearly cliché term, I like think of that as a “canny valley”.

I remember walking out of the theater after seeing No Country for Old Men and most of the old men in the rest room where grumbling, frustrated “what kind of ending is that?” “what the hell happened?” They wanted the neat, good vs bad wrap up in a neat box story. 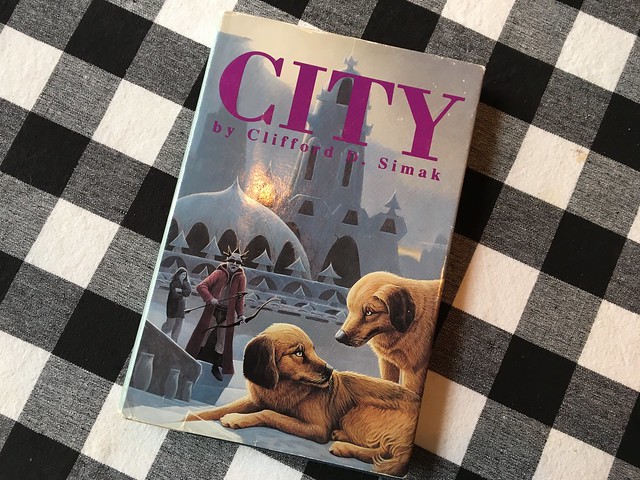 When I was visiting my friend Mike this summer, his wife, Sara, recommended Clifford Simak’s City to me. I just finished it.

You’ll find most reviews pretty much summarize the story line. A future civilization of intelligent, speaking dogs share legendary stories of a creature called “man”. Almost academic debates happen between the stories, in the narration. “Tige” and “Rover” disagree as much as any specialist.

It’s a future apocalypse of humanity without the apocalypse – more like abandonment, indifference. It’s dark. The promise of a future where technology reigns to make work like growing food, creating energy un-necessary, the need for people to live cooperatively in cities vanishes. They can live the idealized life of leisure in the country. Yet with a price.

The mysterious Joe, who seems free of rules, of convention, outlines the “problems” with humanity:

Its preocupation with a mechanical civilization rather than with a culture based on some of the sounder, more worthwhile concepts of life indicates a lack of basic character

“Basically, ” said Joe, “you humans are a lonely lot of folks. You never have known your fellow-man. You can’t know him because you haven’t the common touch of understanding that makes it possible to know him. You have friendships, sure, but those friendships are based on pure emotions, never on real understanding. You get along together, sure. But you get along by tolerance rather than understanding. You work out your problems by agreement, but that agreement is simply a matter of the stronger minded among you beating down the opposition of the weaker ones.”

Joe has discovered the secret of the Jovian philosopher’s way:

The Juwain philosophy provides an ability to sense the viewpoint of another. It won’t make you agree with that viewpoint, but makes you recognize it. You not only know what the other fellow stalking about, but how he feels about it… you have to accept the validity of another man’s ideas and knowledge, not just the words he says, but the thought back of the words…

No misunderstanding, no prejudice, no bias, no jangling– but a clear, complete grasp of all the conflicting angles of any human problem.

Like perfect, uniform empathy? But what Simak does so well through the novel is insert the suggestion that this goal creates a trap– with this idealized way of being, humans grow bored, lazy, discontent. Without the mystery between each other, even the flawed ones, humans suffer. Or decay. They want to escape to other dimensions or enter long sleeps.

Or even a more desirable life form by transforming into an inhabitant of Jupiter. Leave everything human behind.

It’s one of the string of Webster family that “innovates” with technology again, giving dogs advanced capabilities. And over thousands of years, dogs develop a more cooperative society, outlawing killing, creating a brotherhood of animals. Yet in the later stories, the desire, animal? human? nature is never completely diminished. Violence, well some, is as much a vital ingredient as peace (?). Or one cannot exist without the other.

And the dog society, while not even sure it exists, seems to long for what flawed humans provided. The dogs end up doomed too, pushed out by industrious ants, they seek other worlds. They abandon earth.

All that leaves is one long lived robot, Jenkins.

It’s a bleak future Simak paints. He admits in the quotes in the intros that the story owes much to his reaction to World War II. Yet, we get not a Utopian alternative, we get a world that is in the long run, unsatisfactory. In this science fiction, humanity is not destroyed by some extra terrestrial force, nit even itself. It is more done in my indifference.

If you glance at the plot summary, you’d think this is a sci-fi book about dogs ruling the world, but it’s not even about dogs. It’s us.

Or so my mind churns. There are no even answers in the Canny Valley of story. You just keep spinning it around, and around.