In a presentation last Friday at the 2016 Open Education Conference Paul Stacey and I described the Certification project as “Massive Open OER Development.” MOOD? People who know me know how much I think of acronyms that start with M-O-O… (that was meant to be wry humor)

Thus the presentation was proposed as:

Deeply woven into successful open education and pedagogy is an understanding and practice of what Lumen Learning defines as the 5R Permissions – Retaining, Reusing, Revising, Remixing and Redistributing content and ideas. As one of the most visible ways to communicate these permissions, Creative Commons makes the 5Rs clear in the licensing of over a billion pieces of content. But understanding Creative Commons– as a content producer, as a content user, or as organizations supporting open practices– is more than reciting a list of licenses. Therefore a new project has been underway to develop a Creative Commons Certification to provide organizations and individuals with a range of ways to demonstrate their knowledge and use of Creative Commons to place even more information into public spaces. It’s value is in the focus on a certification of performed skills and principles, not just an examination of factual knowledge. Openly sharing materials is a common value for the the Open Education community, and in this project we are pushing openness farther by sharing the process of design and develop of the Certification. We absolutely implore that this not become a repeated acronym, but we share in this presentation how the project is an experiment in Massive Open OER Development.

Before a few comments about the presentation, here are some details on how to explore it. All of the presentation is available (they nuked it!, try http://cogdogblog.com/stuff/opened16/ — the presentation itself is not a slide deck in proprietary [tired] software, but published openly as native web content: 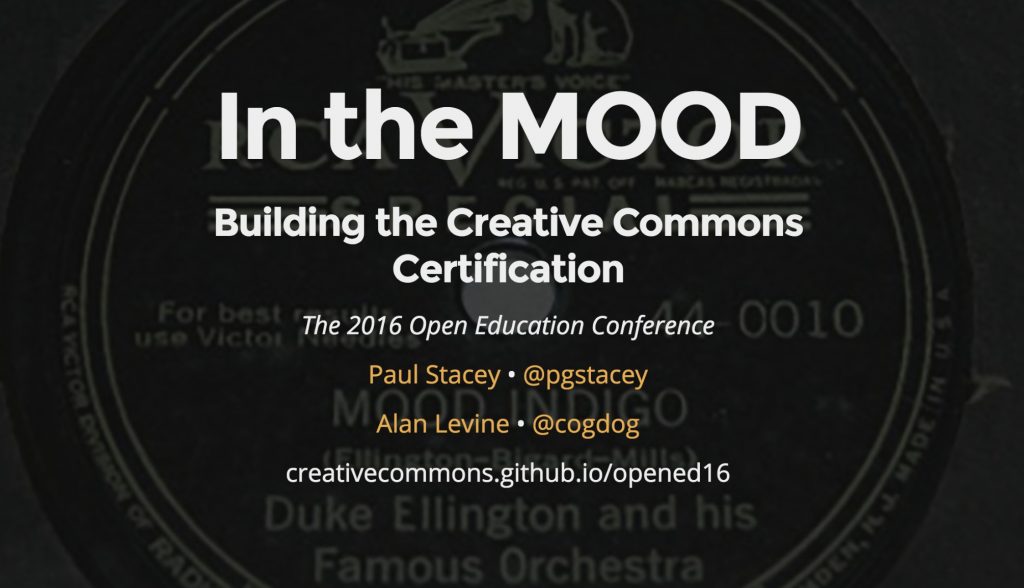 The format allows for moving through the presentation via left/right arrows (or buttons in the bottom right), or to explore more detail via the down arrow (or button): 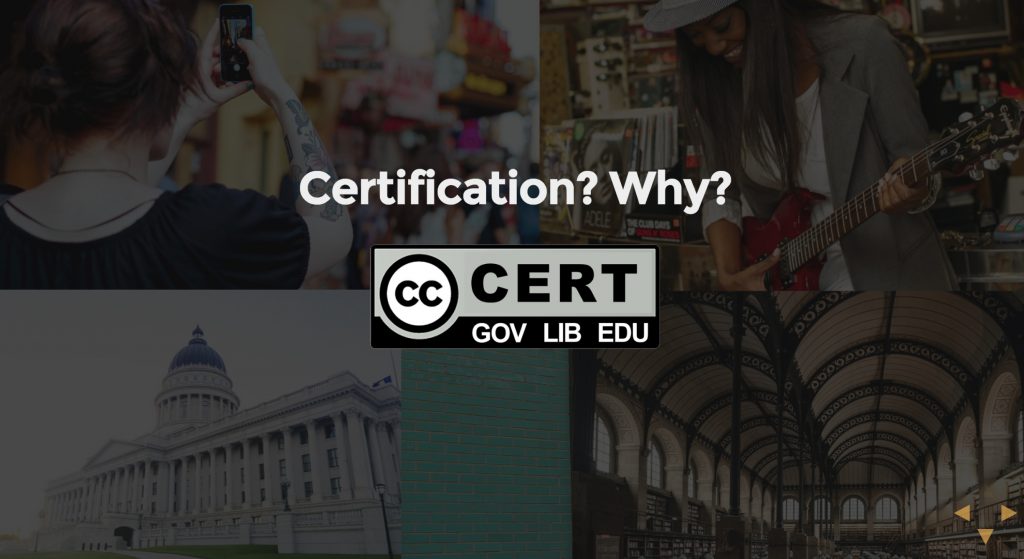 Lastly, the ESCAPE key provides an overview of the presentation, and lets you jump to any portion directly: 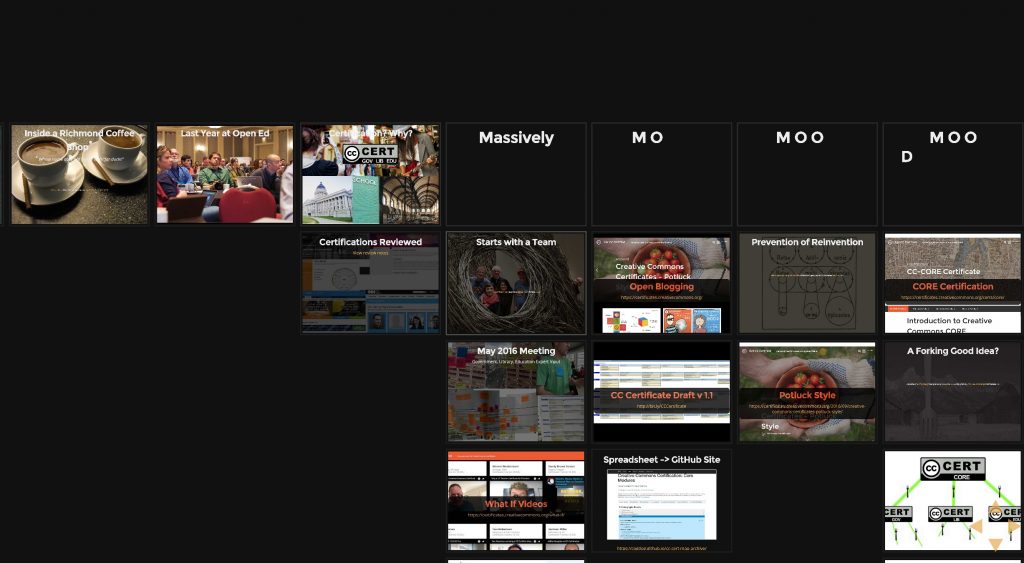 Everyone's getting a little brain-full as we get to the end of the day. @pgstacey & @cogdog presenting w/coffee in hand. #OpenEd16

Yes, our mode was to be conversational, as if we were having a conversation over coffee. Also, because of the 30 minute time for the session, we built the presentation materials with a load of links for deeper dives.

The “structure” of the certifications will be a series of modules and in those, learning units. Each unit will include a “Big Question” to put the unit in context, learning outcomes/objectives, a framing set of opening questions to situate the learner and her prior knowledge, a selection of OERs to learn about the subject (and links to many more), a selection of activities to do that will result in a published public demonstration of a person’s work, and a summary response that answers the question.

Using github to create OER has long been talked about at this conference. @pgstacey and @cogdog are doing it #OpenEd16

Because my role in the project is framing the way it will work, I want to expand a bit on how we are trying to build the system. It’s definitely influence on the model of “forking” in GitHub – a common “CORE” of things one should know in general about Creative Commons, and then forked (meaning copied and modified) for contexts in the specialty areas of Education, Government, and Libraries. 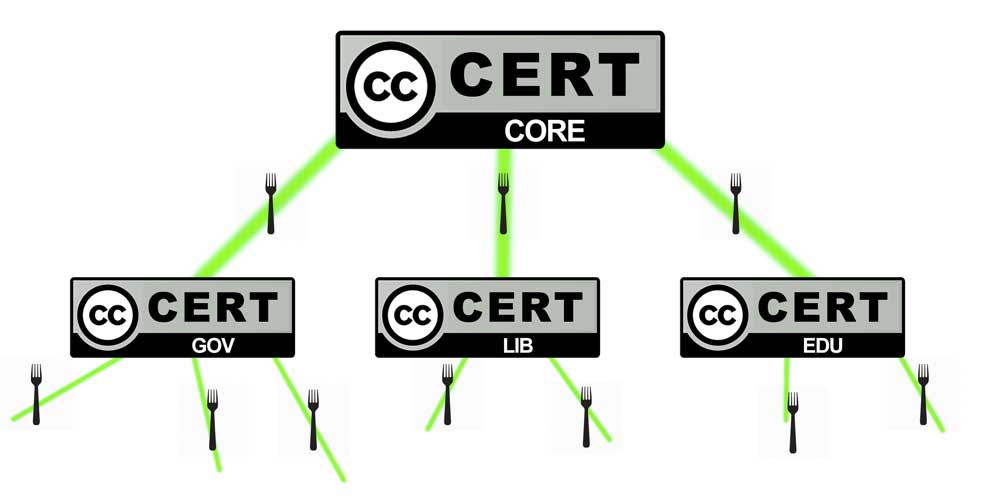 And from there, anyone can fork a variant to customize for local delivery. Conceptually, that’s the idea. It needs not only to have three variants, but people have desires for delivery on multiple time scales (a course, to a multi day workshop, to a few hour briefing) and modality (self-paced online, in person, or a mix). So rather than doing a full design and offering via a selected platform, we are striving to build (openly) all of the raw materials one might need to deliver in different platforms. And we will create several iterations in different platforms which could then be shared/customized. The source content thus will be produced by our team (and others who want to participate) in GitHub using Markdown – a text based simple markup language that can be converted to HTML in a growing number of web publishing platforms. Markdown content is structural — not presentational — headings, links, images, lists, emphasis, etc. It was developed in 2004 by John Gruber along with (an honor to his legacy) Aaron Swartz (Aaron’s post about the project is still available). The module on “The Commons” introduces the concept with a unit on “The Significance of the Commons.” The Markdown format looks like: 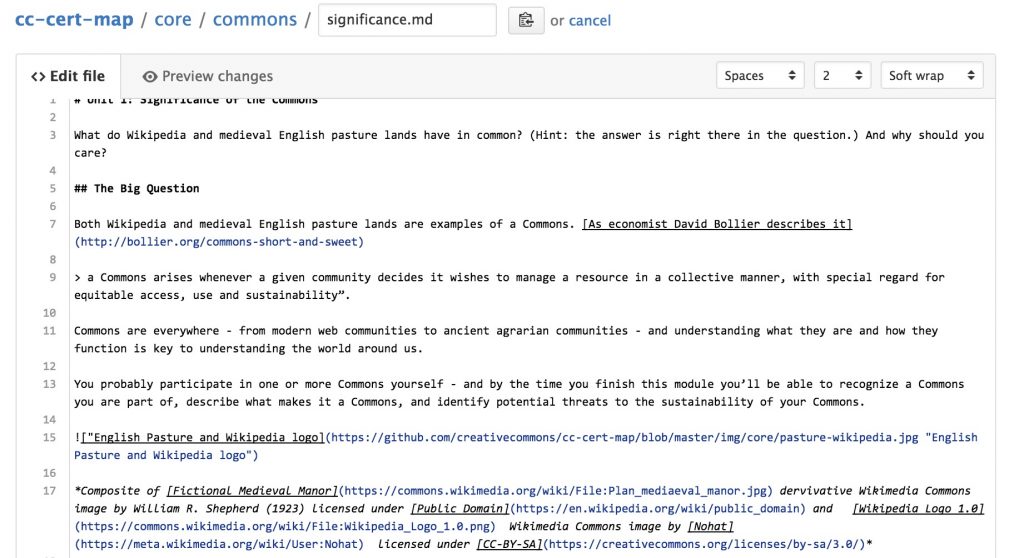 Markdown format for a unit

Viewed on GitHub, it looks like a simple, maybe bland web page: 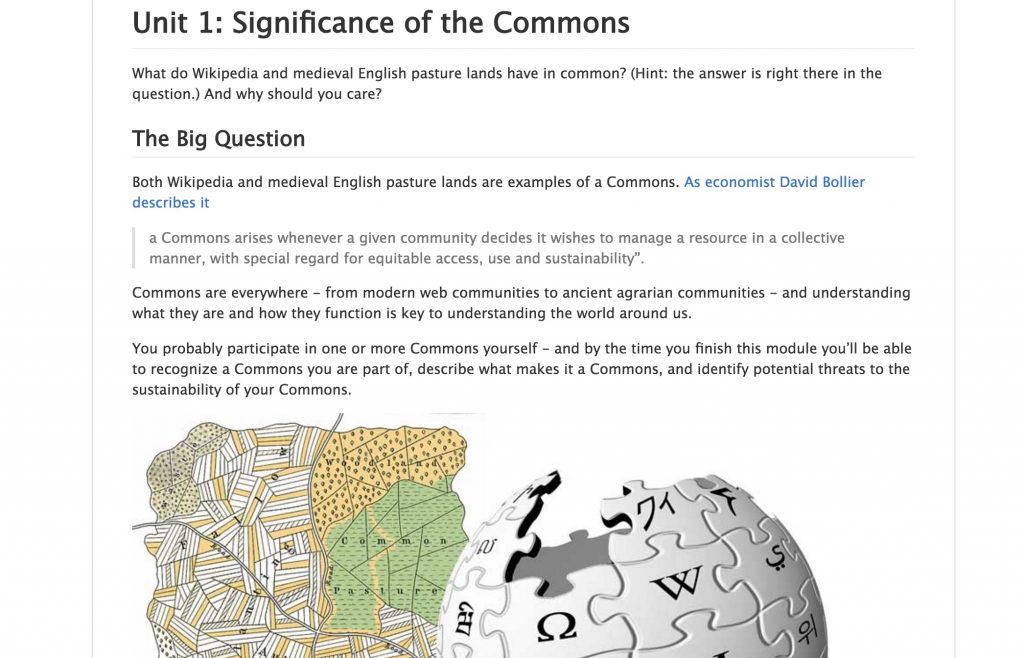 This is not a place people would access the unit. Instead, with the assist of the Jetpack Plugin, the exact same markdown content is rendered in this WordPress site: 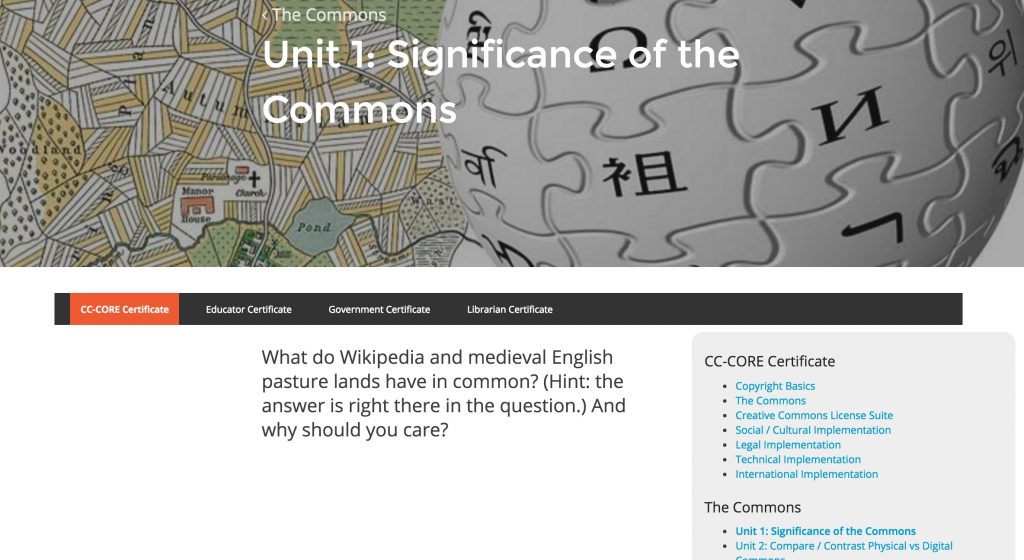 For the technically curious, I wrote some code to re-write the image links, to remove the heading from the first line (because WordPress puts the heading in the title), and to add the inter-unit navigation links. Once in WordPress, I add platform specific things like a featured image. I am using the WordPress parent-child structure of pages to mirror the structure of directories on the GitHub site, and the Page-List WordPress plugin to dynamically build the navigation. This means, any install could remove, add pages, change the order, and the navigation would work. What I have built is not limited to a theme; with a small plugin, this implementation could work on any WordPress theme. The idea would be to offer a starting set of each certification’s content to anyone who wants to customize. Rather than populating from GitHub, I can see offering an XML export from our demonstration site that anyone can use to install their own starter certification site– and then customize from there. But it need not be produced in WordPress. I have now only a crude local prototype, but the same Markdown content can be published using a static web site generator like Hugo: 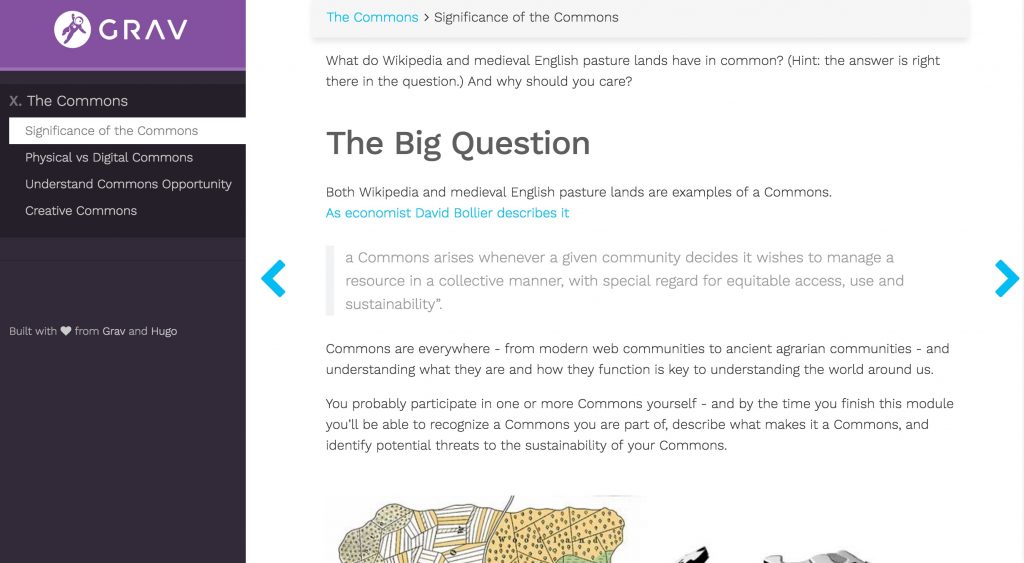 A demo of the same markdown content published in Hugo

Most people would not want to fiddle with this- but once we publish the certifications, then we can offer the same content via GitHub, and anyone can spawn a copy, then modify.

@creativecommons is gonna meet #ds106. Oh. That will be awesome then. @cogdog and Paul Stacey. #OpenEd16

But this is just the content of the certifications. The things people will be doing to “get” (or we prefer, “claim”) a certification, is by completing tasks or as we are calling them, “Quests.” I am building a “bank” of activities using the same model of the DS106 Assignment Bank using the template version openly shared as a WordPress Theme into a Quest Bank. These are things people will need to do, publish their work at a public URL, and submit to the bank with a bit of written reflection, as evidence of their work on a unit. For a sample of what this might look like, see the example Quest for the unit under The Commons on Compare / Contrast Physical vs Digital Commons. In this quest, you would explore the differences between sharing a physical and digital item you own. 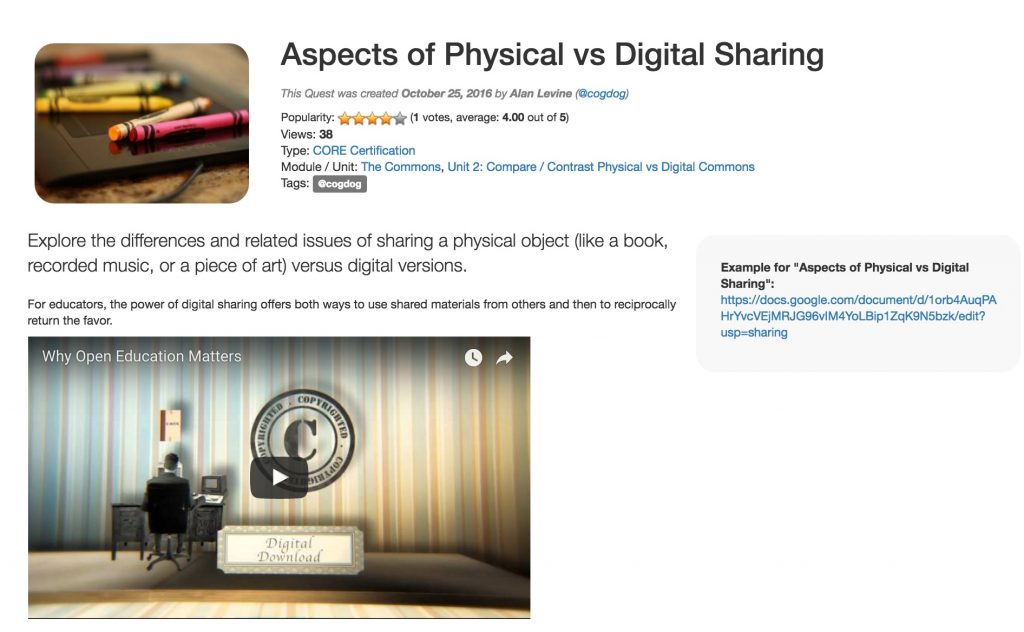 When completed, a response to this quest is added to the bank site. We will be able to track all responses you submit, and eventually have it sent to a credential site we are developing in credly. I may be conflating our “Quest” activities with the #CCQuest social media effort our team has been running, but to me it fits together. We published this one before the presentation to put it out there as a request. Paul recently wrote about his electrical blackout inspired idea to frame this project — A Community Sourced Credential – Is It Even Possible?. Paul envisioned the design of the units as a six sided cube:

So many people, organizations have expertise and materials related to the units of the certification: 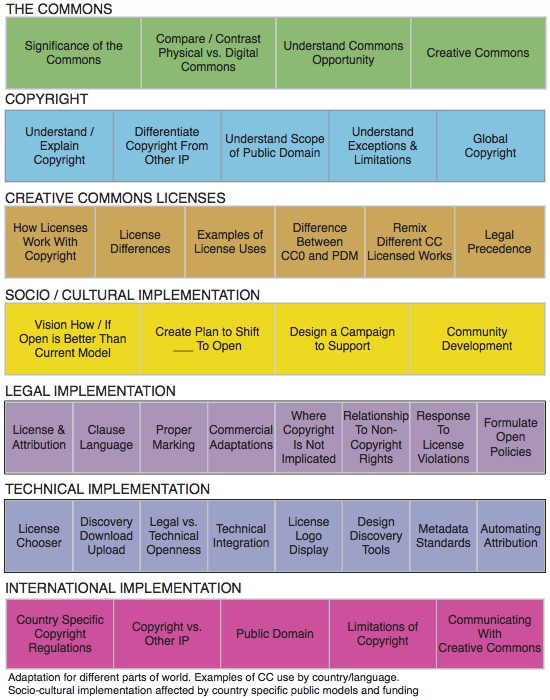 And we ask in our #CCQuest if you, your organization, or some other one you know of might have an interest in “Adopting” one of the units. We are not asking you to build it, but to help develop the Big Questions, organize OERs, and provide ideas for quest activities.

We want this to be community sourced. So this #CCQuest is still running this week. We have a few responses already:

And we are asking again this week– are you in the MOOD with us?

Thanks to Olga, we have some notes on the discussion from the audience, some technical, some operational. Featured Image: Duke Ellington Orchestra – Mood Indigo Wikimedia commons photo by Freimut Bahlo licensed Public Domain