I do have a pile of things I have dreams of writing about, but my blog queue is not a FILO system.

Tonight’s dinner was in front of the RSS Reader, where I was impressed reading Clint Lalonde’s post Of Bikes and Books with his efforts this year to bike ride more, lose weight,and read more books. Of course we are all mere mice compared to Martin Weller’s 48 books read in a year.

My ideas for a comment on Clint’s blog started that mushroom cloud unfolding towards a blog post, so I left my congrats and headed over here.

I try to make a point of not making new year’s resolutions. My success in 2005 was one I never told anyone, never blogged about it, until I took it on, when I ran a first half marathon in 2006, a few more in the next few years, even completing a full one twice. My blog title summarizes how I feel about running.

Maybe it’s just a sense of doing something I have not done before (without being very ill) but I really feel better all around, and I am getting much less back and body aches I felt last year while doing physical work outside.

My methods? Much less beer (replaced with no sugar cocktails), more salad, less second helpings, but the prime reason came into my house on April 6 of this year 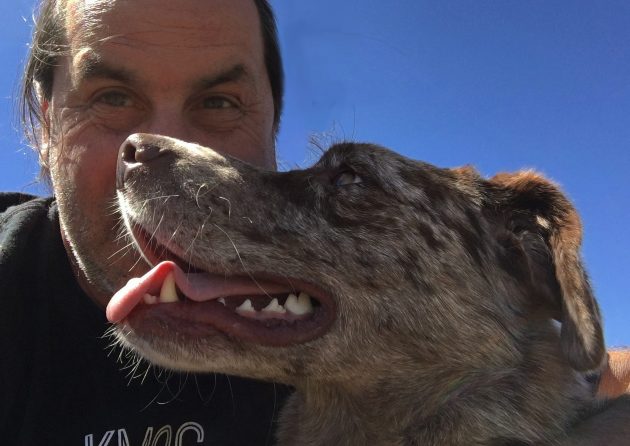 Felix is not only a joyful companion and the subject of 600+ photos this year, but we have pegged a lot of walking miles, averaging 5 miles a day. And beyond the weight loss from this, the relaxation of walking, solving (some) problem while walking, meeting new neighbors have all been plusses.

I do have a number in mind to get down to, but that’s between me and the scale. More is good.

My biking activity, despite getting a new mountain bike last year, has gone to zero. Blame Felix. He is not over over his separation anxiety, so since April I have not left him at home (no major issues, he just cries. And howls, And cries. There are videos.

But I will put that out there as a goal. I have enjoyed the last 3 years doing volunteer work with a local group building hiking/biking trails, and they are within biking distance of home. And with not riding, I missed out surviving one loop of the Fire on the Rim annual bike race … but I did build their web site and volunteered on the route (check out my photos).

Okay, I have procrastinated enough. I think I read more books this year, but did not do any kind of tracking. I did grab a few of the ones I finished just to take the photo above, and likely I have some photos or blog posts about others. I also have a big pile of partly read books on my Kindle App; I read about 20-30 pages of Cory Doctorow’s Pirate Cinema when I travel, but keep forgetting to finish it off.

The goal below might be to finish off those partly read titles. But let’s see what I can check off.

That’s 15 I found, and I think there might be more, but I am tired. I left out two children’s books and a dog training book or 12.

Westerns were a theme because I was hoping to teach that western flavored ds106. And without any real objective, I am noting four are centered on strong women. Four are science fictions, and I can credit Bryan Alexander for reading or linking to four of the titles I read.

But I read more than I thought; I know I read four books the month of February while I was in Puerto Rico (no TV and limited internet in my apartment). Hah, and I have 12 posts written about books I read this year. Not too shabby.

Heck, I might not even need to make a goal for next year. But 2 books a month sounds doable.

Maybe I will be back next year with pointless charts and data.

More books read, less pounds on the scale in 2017?

Top / Featured Image: A photo of my books on the bathroom scaled, juiced up a bit with Intensify Pro. Not uploaded yet to flickr, but when it goes, it will be licensed CC0