It’s open and out of the gate. That is, the open, connected Networked Narratives course I am co-teaching with Mia Zamora. My paranoid self thinks all the colleagues I have talked to about this, and badgered into a slack Slack, are secretly shaking their heads at me.

But with some early openings of a Daily Digital Alchemy, and rabid participating by folks like Kevin Hodgson, Terry Elliot, Laura Gibbs, Sandy Jensen Brown, we have a flow in the twitter waters and a few blogs added to the mix.

It looks like Laura Ritchie may bring a group of students in too.

There are some weird things happening (wink). The video chats Mia and I are having while we plan seem to be intercepted and published (wink).

We have about 17 undergraduate and graduate students enrolled in a digital storytelling course at Kean University, and our first class was Wednesday. The plan is to publish, ds106 style, a weekly mega post of all the assignments, and activities Mia and will do in class, so open participants can do them too. Week 1 is available… these first two weeks are what Mia calls “move in week” getting students into setting up and using their blogs, learning to use Hypothes.is, getting into a blogging habit.

Mia is there in person of course, and I beam in for portions of the class via Google Hangout. We are not streaming or archiving these, they are just for me to have some presence. I’ve done this plenty of times, but it’s always a bit of a removed feeling as you can only read the room so much through a camera.

But what an exciting mix of students, both younger and older, mostly female, maybe half people of color. From my questions, a majority have experience already in blogging (and they asked good questions). Almost 3/4 use or have used twitter. (I also asked how many think twitter is stupid, about half had hands up, including me).

For an activity, and a beginning to think of how to tap into the emotional part of storytelling, I had suggested a reliable activity I’ve used before — the key chain stories. Originally done as a DS106 Daily Create again and again.

The prompt is to pick one item on your keychain (or jewelry or something in your purse or backpack, mainly something you always carry) and tell a 2-3 story about what that thing represents. In the early ds106 days, it was just describing the objects, but in later workshops I ask to start with the object but follow it to what it means to you. I ask people not to over think it.

So yes, you can start with a house key, but the idea is talk about maybe what owning a house means to you, or if it’s an apartment, what the idea of one day owning a house means. Or maybe you end up telling the story of how the tree almost fell on your house in a storm, or that summer you and your kids painted the house.

The key is not the story, it’s the launch point.

So what we did was have the students get in groups, and they tell each other their stories.

This was the part where I logged out and let them go active after sitting there listening to us. My favorite part of doing this in person is seeing how the energy room changes. It usually lifts the roof. Mia did capture the action in a photo:

We also had one of those great, unanticipated network moments when Kevin Hodgson did a quick remix of that photo with comic thought bubbles

@cogdog You know how we say hello out here, right? #netnarr pic.twitter.com/rjMtkvliXn

I’m not sure how that went, that’s what their assignment is this week to blog about.

My big push this week was something I hope to get set up a lot early (standard excuses apply) to get a sign up form added to the site so people could self-enroll their blogs. Each time I redo another Feed WordPress / syndication site, I luckily can leverage code I’ve used before, but there’s always that last 10% of tweaks I underestimate.

I had this idea bubbling the last few weeks to make the tool set up a more in theme with this theme of Digital Alchemy and some gaming aspects. I saw a sort of Choose Your Own Adventure game like path to guide participants through setting up twitter accounts and blogs and adding blogs to the site.

This is totally inspired by what Tom Woodward did for the Thoughtvectors “Stream” we did a few clicks ago for Gardner Campbell’s VCU course in 2014 (we have recast and updated that site for Gardner’s new open course, and the stream is there too).

What Tom did was set up some questions to help people through the process of figuring out their RSS Feed. I wanted to extend this, to also include some options to have people think through about use of twitter.

For a while Audrey Watters has written that it is disingenuous or worse for teachers to require students to use twitter (or any social media platform). And

I've stopped using @Twitter in my teaching, because the platform is no longer safe for women, POC, trans people, queer people, students.

I don’t disagree, but have no way to gauge the danger. And yes, my skin color / gender give me a lot of immunity. I am not comparing my experiences. But what are we saying when we talk about Twitter as one general pool? The hinge is more on how we are using it. What happens in twitter happens elsewhere online. If we are to provide the safety shield for students, we ought to not send them online at all.

It is also assuming that we ask the students to go in there as themselves. In my setup below, I strongly advise them, if they are new to twitter or are making a new account for this class, to not use any self identifying information in their username, displayed name, or location. Don’t give them a phone number. With experience, they can decide how to represent themselves.

On this course we are not looking for a slack like discussion space; we want people to experience world. And this world outside, is full of danger. All this vileness of twitter, it’s coming from people. It’s in them when you pass them on the street. I should no better than try the bad analogy of daily getting into your car knowing the probability of an accident…

And also, we are exploring characters and identities. Why not go into twitter as an alt? (I have like 15).

I had this in mind all along. These are adults, and I want them to make this their (informed) decision. So I saw options to offer:

I had this idea for the way the paths would work as WordPress Pages, but I did not want their url names to give away what the choice leads you to. So I tossed off an email to Laura Gibbs, folklore and Latin guru, and asked for a few mythological words I could use for an outlined series of steps… she responded in like a few hours. Laura, you are amazing.

I had a loose sketch of the options and paths for the twitter decision tree. I honestly took the logic of the paths for the blog setup from what Tom had done for Thoughtvectors: 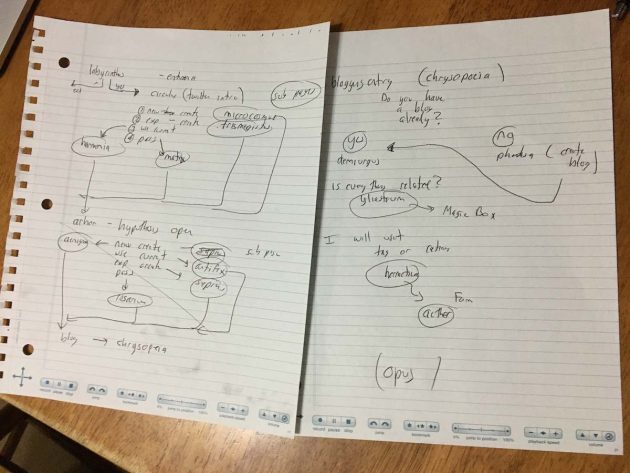 Doing it as WordPress Pages using each step (Twitter and Blogs) as a child, and then within, each choice as a child again, structured it nicely: 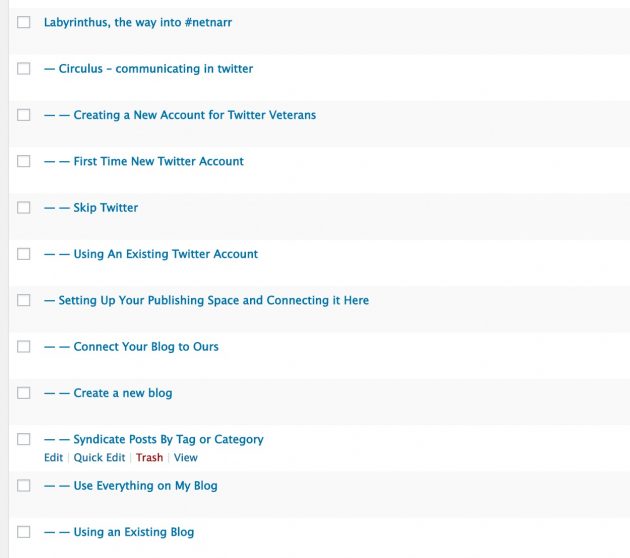 WordPress page structure for the Labyrinthus

Well enough talk, you can walk it yourself! (watch the typos, they are likely everywhere).

It is in operation, 4 open participants and 1 student have emerged alive.

I am so excited about the energy and also savviness I heard from the students. I have not done much to try to explain blogging, and in fact, I encouraged them, if it was new, to not get caught up in themes and prettying it, to just start by writing.

Anyhow, it’s exciting to put this in motion. As improv is a genre we are studying, I can certainly say that Mia and I are improv-ing a lot of the course.

Top / Featured Image: “Lions-Gate-Mycenae.jpg” Wikimedia Commons photo by Andreas Trepte shared under a CC BY-SA license, modified by me with overlay of a Networked Narratives logo I made on original image