#digitalstorytelling gem @cowbird to shut down: https://t.co/IRIyymTJcY
This makes me so sad.

The standard opening lines here would be my woeful admission of how little I had written in that special storytelling space. It would be wafted with moth-ball scented excuses. You can more or less see the words without me writing them.

Even before a click the “next” button to read the eulogy by it’s first sprouter Jonathan Harris, I have to marvel the image that a digital artist from Vermont chose for a piece titled “Back to Life”.

Heck, it’s just up the road from me. And like cowbird, I can rattle off a long list of excuses why I do not get more often to the little creek first explored by a one-armed Civil War vet.

The photo looks to me like one of the grand views over near the top of the South Kaibab Trail, looking a Bright Angel Canyon, the route out of the Inner Gorge that is [somewhat] lesser traveled. The boxing of the image… hmm is that an digital editing effect or maybe a look through a view finder? No idea, no matter, but that left side image of a tree created by an internal reflection of half the tree is eerie. As are the Polaroid saturated color tones.

Harris writes words to rattle around the soul, an indictment if you will:

And yet, since 2012, many things have changed. We’ve come to realize how addictive digital technologies can be — how, by attempting to connect us, they often end up creating further isolation, trapping us in so-called filter bubbles, hypnotized by glowing rectangles, and disconnected from life. Meanwhile, services like Facebook and Instagram have seduced many of Cowbird’s earliest authors, and usage of Cowbird has steadily declined. In our early days, a typical day saw a thousand new stories; now a typical day sees about ten. Our community has coalesced around a core group of about 100 regular authors, who conduct most of the self-expression that happens on Cowbird today. As Dave and I have moved on with our lives, technical problems have begun to plague the site, frustrating regular users.

Guilty of being trapped “in so-called filter bubbles, hypnotized by glowing rectangles, and disconnected from life”?

So yes, the grand view of the Grand Canyon, where literally you stare at the tops into the stratified layers of Earth’s history, back into the crushed mountain base of rock much older than a billion years, when life was bacteria. The Grand View that 90% of the people who get there waddle out of their carbon emitting boxes, gawk at the edge, instagram the view, and leave. The Grand View that maybe a much smaller percent strap on their loaded packs, leave the phones off, and walk through time.

I so appreciate that unlike the rest of the dust biting web, Harris is committed to leaving the thousands of stories cowbirded as an archive.

To that end, I have committed to one story per day until the end of February 2017, when no more can be added. 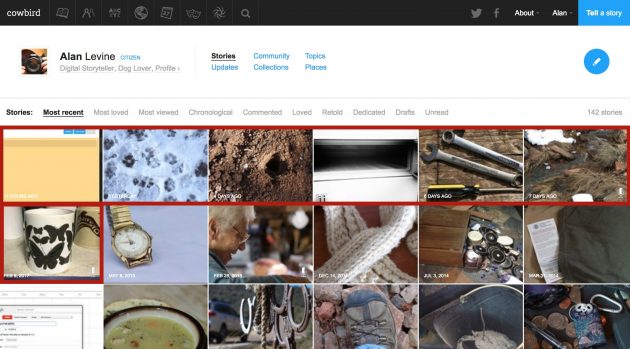 And while most people will remain “hypnotized by glowing rectangles” I’m going to be there at the end of the trail.

Thanks Jonathan Harris for showing the way.

Featured Image: Screen shot of Jonathan Harris’s “Back to Life” story on cowbird announcing its end.