Let me live, love, and [blog] it well in good sentences.

It’s been a while since I blogged a breakdown on the making of a DS106 Daily Create. I was lagging a bit on energy this afternoon, and that’s when I see if I can publish a Daily Create response in less than an hour.

#tdc2027 Shatner A Song: William Shatner, song artist. Share your voice speaking a portion of a song in the mode he does, kind of dead pan beat poet (cigarettes not required).

This was one submitted by Todd Conaway… I took some liberty with editing. Todd’s original title was “Speak a Song” but he did include the example of William Shatner mono-toning “Rocket Man:

I thought it would be fun to ask people to do a song Shatner style, so I re-wrote the title and tweaed the prompt.

And of course, because it was doing a video, when I peeked this afternoon only two people had taken it on. When the Daily Create is doing a video or audio, it seems like everyone runs away.

So my thinking was flowing along what song would be surrealistic in that Shatner style? My mind spun, and then I thought of the Johnny Cash’s cover of Soundgarden’s Rusty Cage. I’d even did a remix of the two versions as an example of a cover song that is not just a carbon copy.

I bet then my Shatner version could bop them both.

The video I recorded in my guest room in one take recording right into QuickTime player. I just pulled up the lyrics, started recording, and did my best flake version of Shatner. My dog Felix wanted badly to be part if this, and he got himself on camera and tossed out a few yowls. I used a carrot in place of a cigarette.

The music under Shatner’s versions was often rather muzak like or orchetral, I took a chance and got lucky and found midi version of the song on YouTube

and I used my handy dandy downloader to grab an mp4 version.

Then it was some quick editing in iMovie, importing both videos. I put the midi video track on first, and used the command to separate the audio from the video. Then I inserted my video in front, slide the audio over to the left, and deleted the other video. Slap in a few titles, put on a video effect, and Shatner’s your uncle. 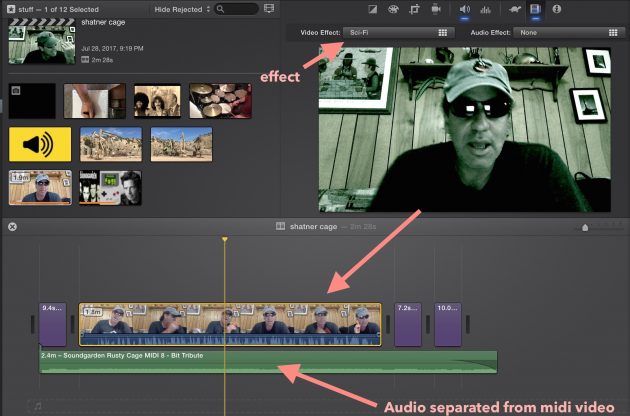 And BOOM, here it is

I hope my Shatner imitation is pretty horrible.

Featured Image: Single frame screenshot from YouTube video William Shatner “Sings” ‘Rocket Man’ (1978) – BEST QUALITY!. Beyond the beyond campness of the video, these edits where shatner gazes wistfully at Shatner are priceless. Or freaky.