I might be a broken record but again and again I return to David Wiley’s description of the disposable assignment (and what the potential is to be the opposite):

David terms the alternative to be “renewable assessments”. Now not to get all nitpicky semantic, and while “renewable” is a desirable attribute, is it necessarily the opposite of disposable? And why do assignments get cross listed as “assessments”? We have collections of activities in places like the DS106 Assignment Bank which are assignments, but not necessarily assessed.

It does not change at all the value of the concept, it just makes sense to me to aim for Non-Disposable Assignments. Maybe it was the NDA acronym that is a problem?

I’ve been trying a few of these in my Networked Narratives class. And just to show I might be familiar with my own dog food, in looking back on some previous mumblings on the topic I have to admit two of these are rather “textbooky” in nature.

The hallowed halls of the #NetNarr Referencium

I made up a word and also a concept that confused my students for the first two weeks. But my idea was, that in the course of the class, students (and open participants) are coming across many readings, videos, references on the three main course segments — Digital Art, Games and Gaming, and Electronic Literature– as well as the over-arching theme of “This Digital Life”.

The idea then is I set up an open google doc, and over the month we are working on a topic, ask students each week to contribute to web references (title, url, and a brief description). For each of the three segments, I have two of my graduate students assigned as editors- they encourage contributions, organize and edit the contributions, and at the end of the month, I close the document to editing, and convert it to a web page.

I think there would be not much trouble finding items from secondary links/references from assigned readings / course materials, plus things they might come across in their regular information consumption. But I also set up a page to “flow” possible candidates into. This is a feed of anything tagged #netnarrlinks in twitter ( way anyone can nominate something?) as well as the things I am always bookmarking in pinboard.

To establish a path, I managed a shorted round for the first three weeks, when we were introducing the idea of thinking about our digital lives (tracking, surveillance, etc). I publish this in an online “journal” (self published using the TRU Writer SPLOT) with the first one at http://journal.arganee.world/2018/87/ (it was an easy publish, just copy/paste from the Google doc).

The current one on Digital Art is in progress, and already going better than the first one. Anyone is welcome to add something to the collection, hoping to show my students the “network effect” of contributions from beyond our class.

So what are we making that is non-disposable? A published collection of resources on our course topics, co-created by students. It’s not huge, but I hope they see that they are building something for people beyond our class. 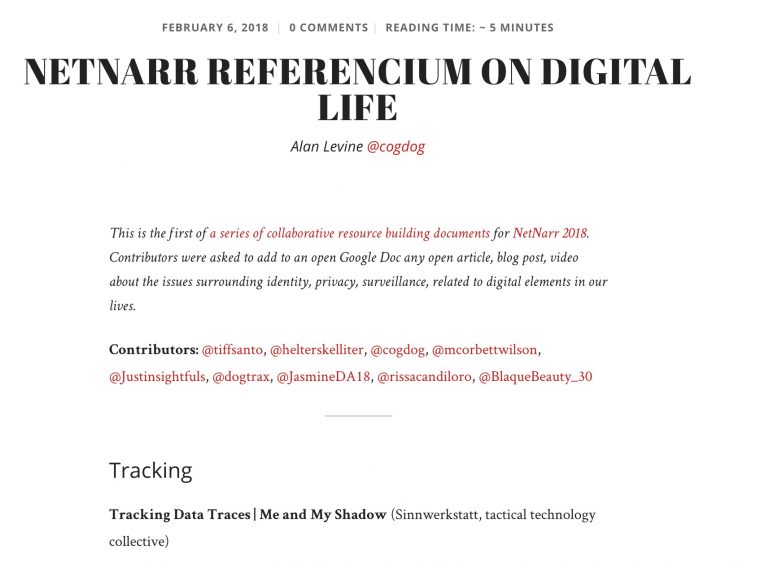 (Also, after publication, all of these are set to open with Hypothes.is annotation enabled).

Again a small way anyone can help is to tweet any interesting articles, videos, presentations, examples of digital art with the #netnarrlinks tag. 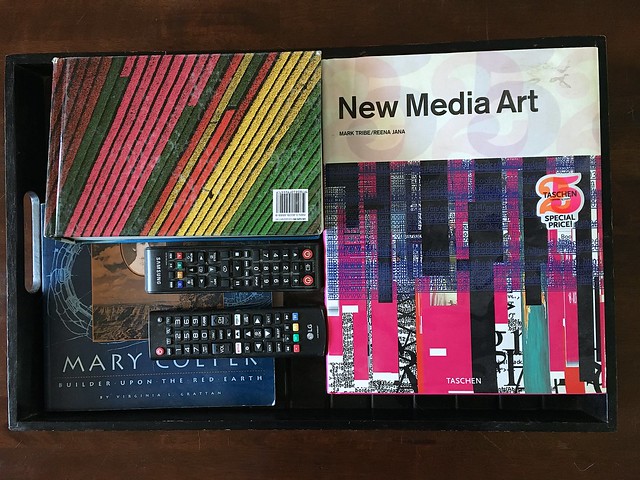 As part of the introduction to Digital Art for Week 3 of NetNarr I aimed to have students appreciate some of the early examples of Net Art from examples in the 2006 book New Media Art by Mark Tribe and Renna Jana.

I bought a copy of the book on a whim in 2010 when I visited the MIT bookstore; it had an appeal because that was the part of web history I knew well.

In January 2014 I got a bug to start a project to revisit these digital artworks, finding out if they were still even available, what became of the artist, etc. I also decided to make it a project to learn tumblr better, so launched Re New Media Art 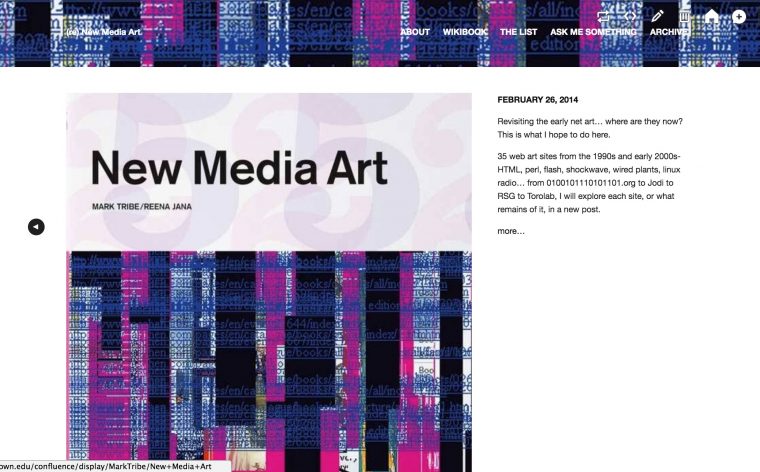 There’s a blog post somewhere in this house about the idea.

On thing that helped was that Mark Tribe had set up, at least available in 2014, a wiki version of the book content on a Brown University server. It’s no longer publicly available, but again, hail the Internet Archive.

In two years I managed to complete reviews of a whopping 6 of the 35 pieces. I was actually pleased to find a number of the old tech sites still there, again supporting my theory that individuals are the best hope for archiving web content; institutions not so much.

My idea for the NDA (which I realize might be interpreted as asking students to do my research) was to have them take on the digital archeology investigation of one of the 29 works in New Media Art that I had not reviewed. I also came up with the plan to have each of my undergraduate students work as a team with a grad student. I asked the undergrad student to be the one to write up their results in their blog (this was also my cunning plan to have the grad students help the undergrads write better posts).

I put some instructions and the list of all digital art works needing review into an open google doc, so the students could “claim” the one they chose (this was done in about 45 minute block of time). The task was:

I was pleased with the effort and results they got for doing this in a short time (I typically spent maybe 90 minutes or more doing each one). Almost all of them were new to the Internet Archive and the Wayback Machine (which is a key part IMHO of being a Digital Alchemist).

Three got done in class by my students, and our heroic open participant, Kevin @dogtrax did one too. I used the information in each of their published blog posts to move the research into he tumblr site, giving each of them credit there, e.g.

Credit for students who researched “Empire 24/7”

These are the new items added:

While not huge, I’d content this works as adding value to the world. And there are still 25 art pieces left in the hopper for anyone else to take on.

Likely my favorite teaching with the web concept of all times is the DS106 Assignment Bank, and it’s not even my own creation. I’ve done the digging into the origin story, and the idea spawned from conversations among Jim Groom, Marth Burtis, Tom Woodward, and myself, but it was totally Martha who brought it to life and built the architecture.

After creating a generic version as a WordPress theme, I’ve put it to use several times in later projects (Warning,if you invite me onto a project chances are I will suggest a bank, or a daily ______, or a SPLOT. It was a Challenge Bank for the UDG Agora Project, a Box of Magic Tricks for my ISS Institute in Australia. Briefly it was a Quest Bank for the Creative Commons Certification Project.

One of the first uses by someone other than me for the theme was the work Karen Fasimpaur and Brad Emerson did to create a Connected Learning Make Bank. I really wanted to do one for NetNarr, and after a lot of tossing bad ideas for what to call the “things” in it, I settled on borrowing the name of a NetNarr Make Bank (after checking with Karen, she said, “yup, do it”). 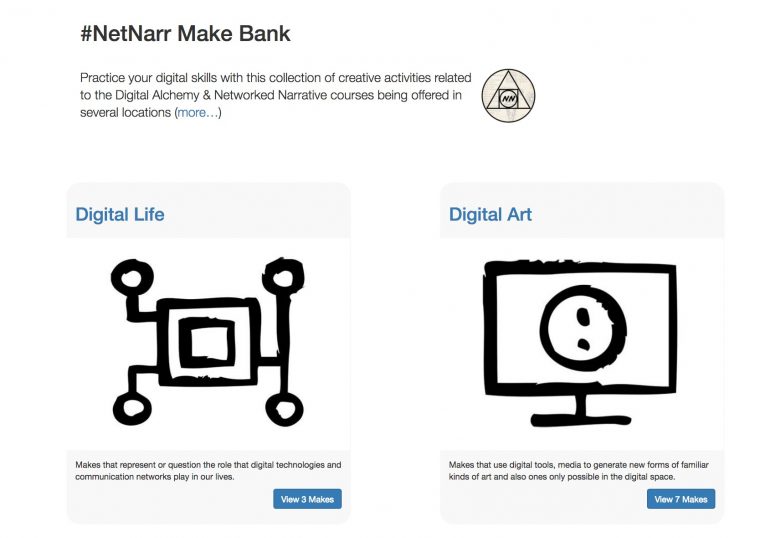 The Make Bank is organized around the main topics of the course- This Digital Life, Digital Art, Games and Gaming, and Electronic Literature

What makes this valuable, non-disposable? First all it asks anyone who responds to publish their work online at a public URL (often but not necessarily their own blog). The value added is that each response gets added as an example to the original Make (aka assignment). As more people complete them, it grows examples to inspire others.

But also, it opens the door for students to not only complete assigned work (which they have been institutionally trained to do) but also to add new Makes (aka assignments). This changes a lot for them; I’d suggest more is learning in creating an assignment than doing one. Plus, the format requires that you not only develop the assignment, but also complete it yourself as an example. It is dogfooding.

Plus, the bank takes the assignments out of the context of my course content, and puts it in a place others can use, or remake. So while we have already the New Media Art research this in class (the Make Bank was not quite ready), it now exists in the Bank as an ongoing, non-disposed, assignment.

Through some new categorizing features, I can now build a set of Makes, say this collection from the week we looked at Memes.

My students are still getting the hang of how this works, that responding to the Make, means writing a bit about it in the response form. Hopefully more than “here is my response”. 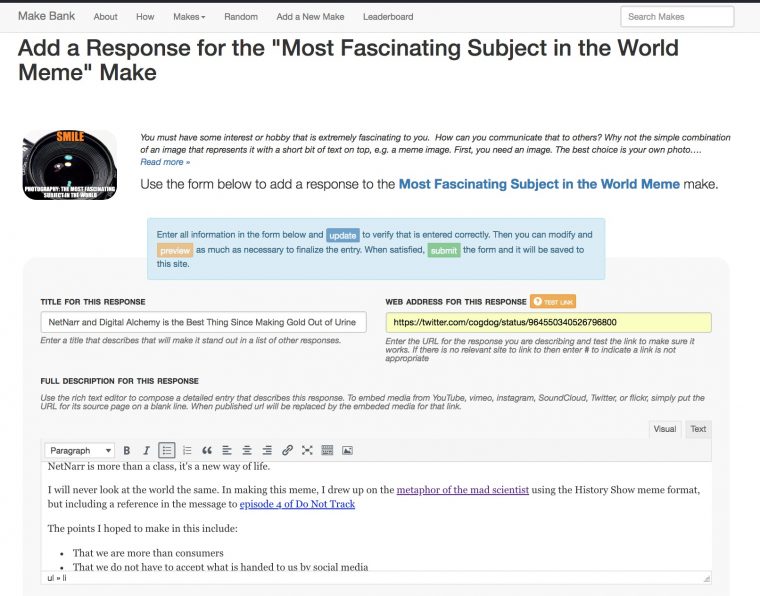 Through the Make Bank we will do more than writing articles; it opens the door for non-disposable participatory projects like #SelfieUnselfie.

I’m not in the teaching business to create boxes to collct assignments.

No matter what you call them, making non-disposable assignments / renewable assessments is all about creating meaningful work.

And yes, it’s a bit more work on your end to build. But it changes everything for you and your students. Once you go NDA, you cannot go back to this. 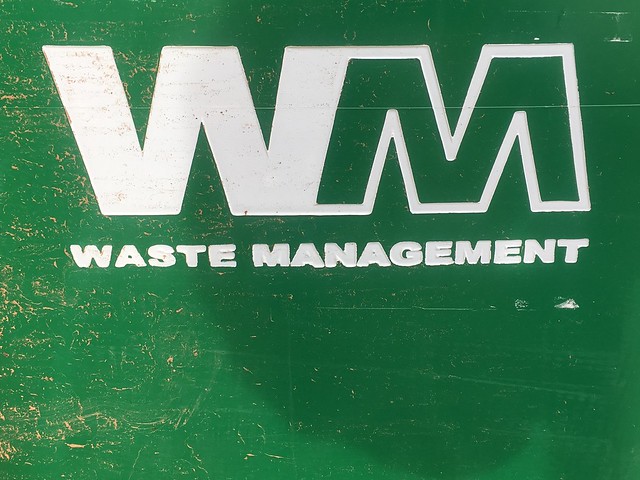 Featured Image: Spotted this on a neighbor’s trash can, it seems high tech considering we have no curb-side recycling where I live (or no one told me). Darkened a bit for contrast from Non-Disposable? flickr photo by cogdogblog shared into the public domain using Creative Commons Public Domain Dedication (CC0)