Mexico has much to teach the American president about the uses for walls; they are not for barriers, but a surface for mural art.

I was charged with putting together a web site for the project I was part of last week in Mexico. While it was a followup to the UDG Agora (the participants were all alumni of that program), this was aimed to be a different focus, Innovation and Open Education, and called for something different.

And because our previous site was already set up on Reclaim Hosting, adding a domain to our account was a snap.

Oh, and I had about a month to do this.

As usual I said I needed a metaphor before we started. I forgot who suggested in a hangout call in January, maybe Brian, I think Melanie mentioned the Mexican murals in Vancouver, where the description really fit the vision of the project:

Community murals have their roots in the mural movements of Mexico and of the United States. The narrative and expressive works that line the walls of public buildings and courtyards, streets, parks and highways of Mexican and American cities have provided the genesis for an ever-evolving mural movement of activism and social change that continues to the present day. These precedents have had significant impact on the evolution of Canadian murals, where artists find ways to enhance and strengthen their communities that often are marginalized, or at odds with the politics of the day. These works are never simply individual efforts, but are often collaborations between artists and local residents, resulting in permanent works that rise from the heart of the community, rather than by being imposed upon it. The resulting works remain as permanent icons of community identity, creating landmarks within the urban environment.

This is even better stated in a video UdG produced for the project. the auto-translated captions are poor, but the art history professor describing the history of Mexican Muralism perfect extends the metaphor to open education.

It also fit because of the José Clemente Orozco murals that cover the ceilings of several important buildings in Guadalajara, notably the Paraninfo Enrique Díaz de León on the UDG campus. 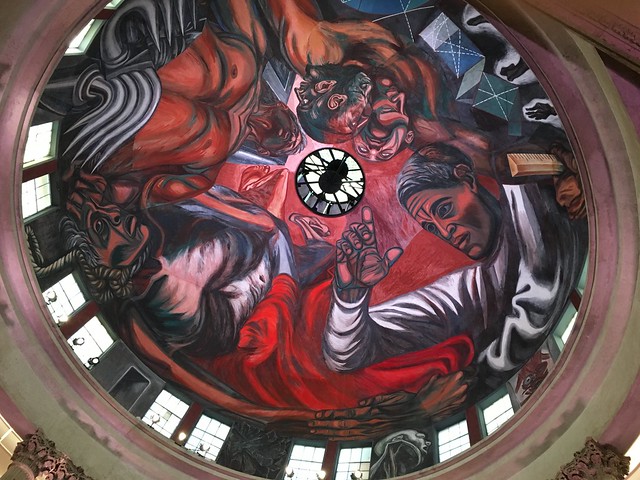 Okay, we had a metaphor. Now about the web site… 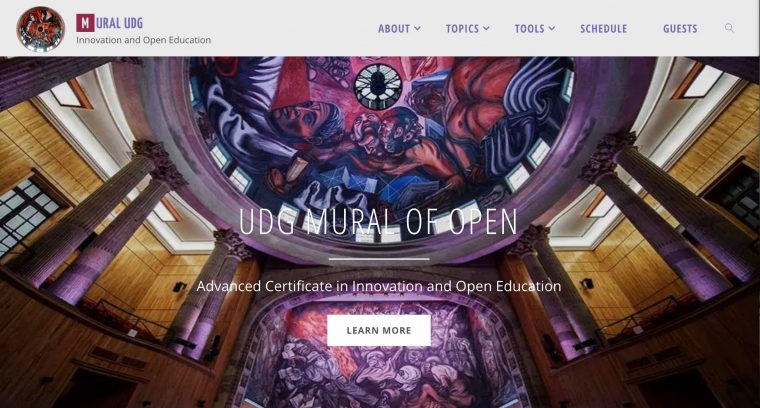 I very much lucked out in picking the Fluida Theme, a gem of a theme that is free and available in the WordPress Theme directory. I knew of it after seeing it on the Reclaim Hosting (them again) workshop I am headed to this week.

When I first saw the site and peeked at the source code to find the theme, I had a hunch Fluida would work for a future project. It offers a lot of flexibility for a site with a landing page, all configured via the Customizer, and avoiding the overhead of a visual theme editor and stuffing your site full of shortcodes.

Most of the site is put together as WordPress Pages, and I use one of my go to plugins, Page-List, to autogenerate index pages like the Topics, About, Guests based on a parent-child structure.

For example the Topics page: 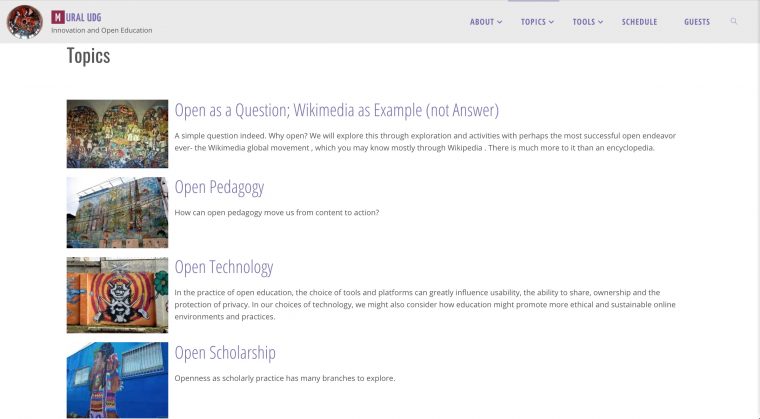 is generated by this shortcode

Where I identify the parent page (topics) by ID, order it by the menu order option, and request a featured image thumbnail 240 pixels wide.

We initially had these four topics, and in a first go around, I used the themes Featured Icon blocks to display them. As we worked on things, two more topics were added, and I went to another new go to plugin, WP-Tiles, to create a visual grid layout (using the page’s featured images) on the front landing page.

Ironically, the two extra topics later got folded in other ones, but I still like so much what WP-Tiles does for displaying a grid of posts/pages by the same criteria one can do via code and a custom WP Query.. but it’s all done by a shortcode. Plus it has a cool tool for designing the grid layouts.

Read more of my love for this plugin. 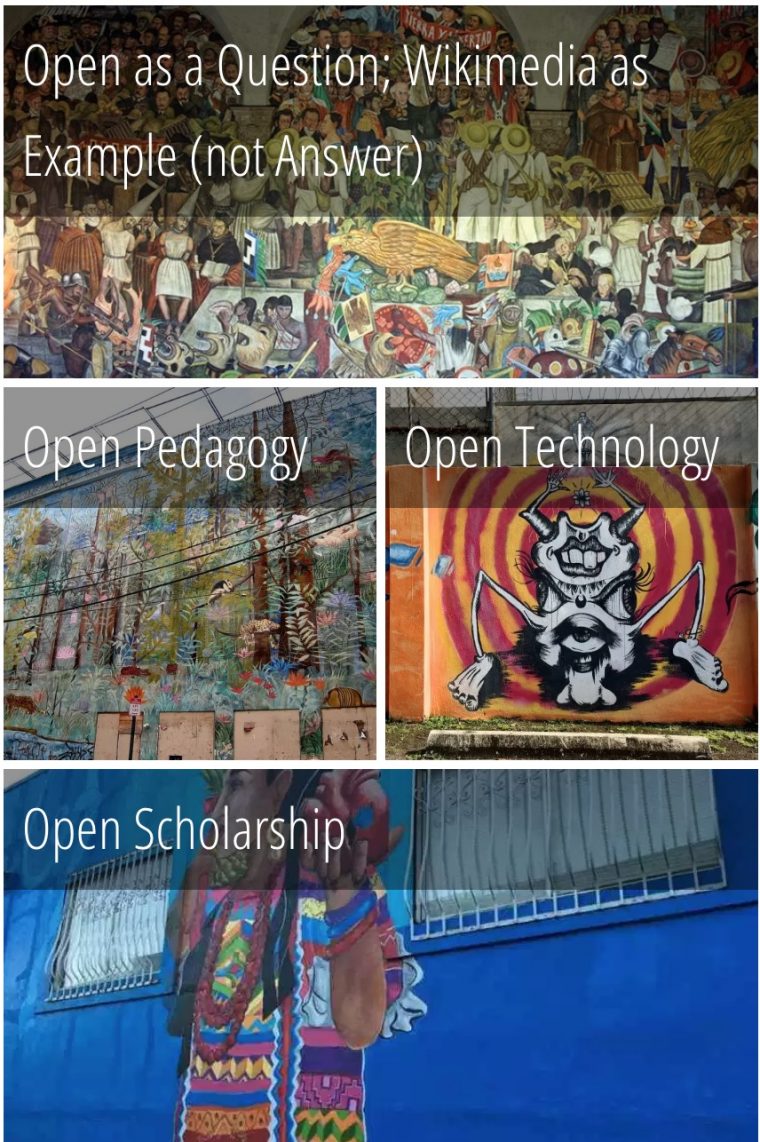 The grid layout to display four pages on the front, in a larger screen it’s a 2×2 square grid, here in mobile size it responsively changes to a mobile friendly layout.

On the web to do list was a desire for a place for participants to share photos. Sure I have a SPLOT for that, but it seemed more lightweight to use existing social media. On the photos page I have two things co-mingling – a feed of instagram photos tagged #muraludg (The Instagram Feed WD plugin working here) and a Twitter Collection grid.

I sought some way to present tweets from our hashtags with media in them, but fell short on a solution.

But I found a new trick to me, and a different means to “curate” content from Twitter in addition to Moments. It took some digging to figure out, but you can use TweetDeck to pull tweets to a Collections column 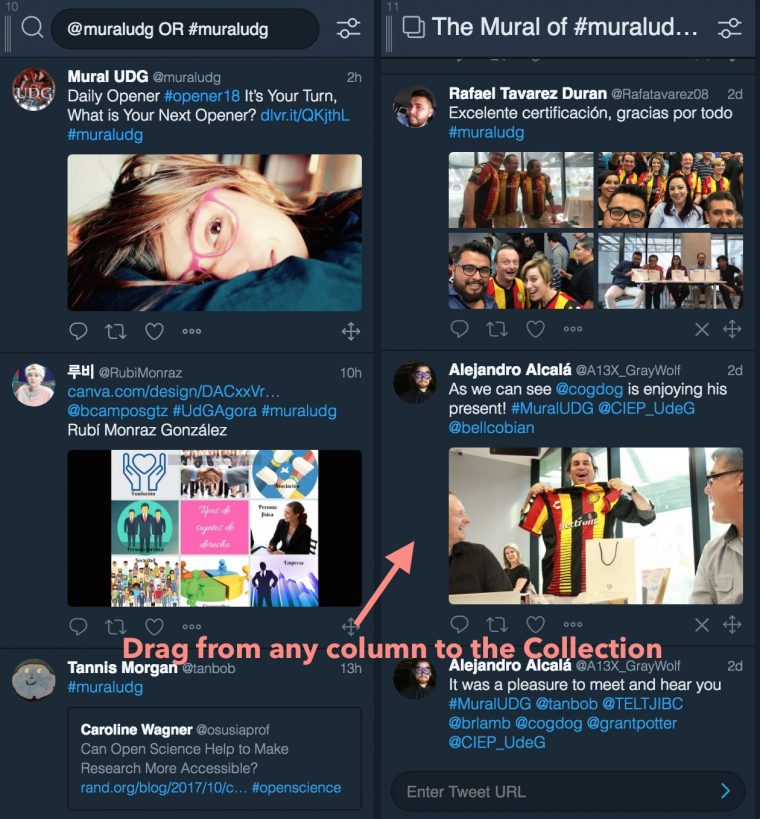 This is to organize than Moments. Using the Share option at the top of the column, you get to a web page where you pick the style of embedded collection: 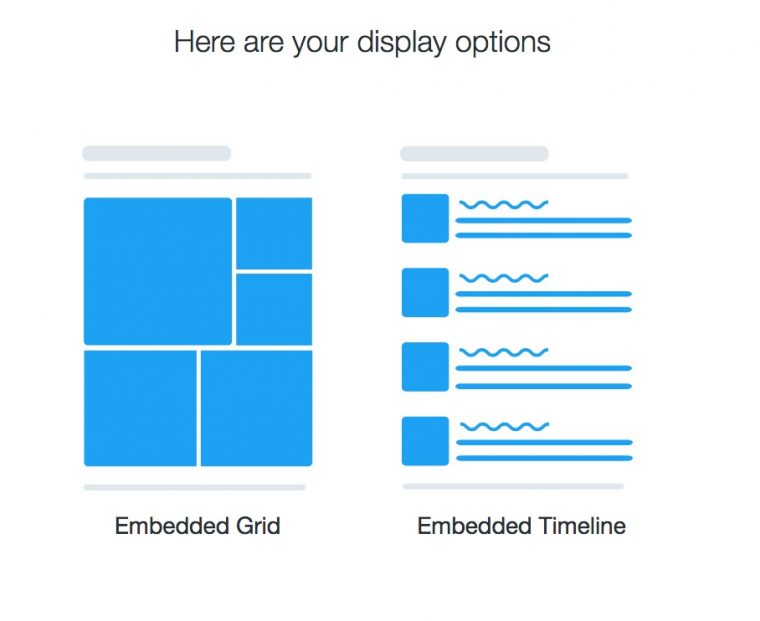 I wanted the grid option on the left since I was only choosing tweets with images or videos in them. It looks good on the photos page, or here in the link as a timeline, which again can work as a curation thing.

That’s the main site, there are a few others, so this is all running as a WordPress Multisite, the rest are some from my usual bag of SPLOT tricks plus a new one.

The participants had already experience a variation of the DS106 Daily Create we ran for the UDG Agora project as the Daily Try; this time we ran 2+ weeks (one week before the program) the Daily Opener.

This is an instance of the Daily Blank theme I evolved a few years ago from the original DS106 Daily Create. 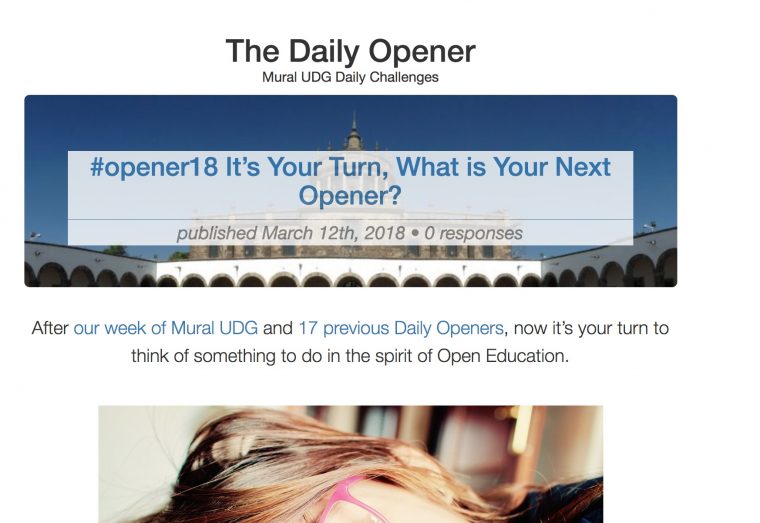 And because they had done this before, many participants jumped right in, the leaderboard shows the keeners.

We had activities each day where we wanted teams to produce short posts or ideas that would promote/advance openness at UDG. It was definitely a SPLOT like thing; and my first thought was a version of the TRU Writer (they used it in the Agora to submit final individual reports).

But I had a different idea, since I had recently added the rich text editor to the TRU Collector SPLOT, it was much more simple.

This we put to use the Acumaldor (the Accumulator), and it worked fantastically: 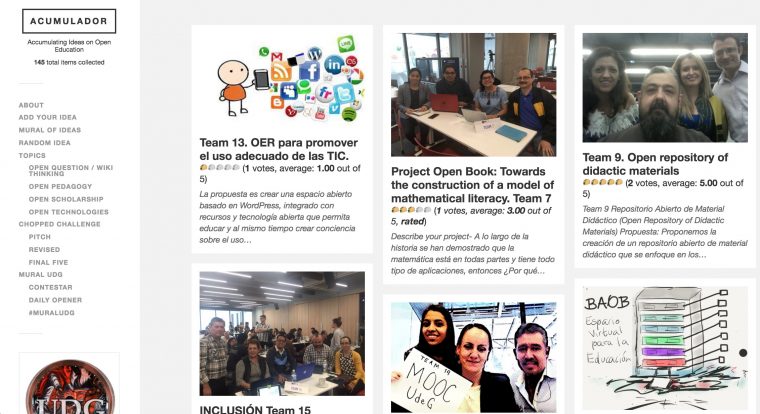 I added a custom modification to enable public ratings (Wp-Ratings plugin), in our case a 1-5 taco rating scale, because tacos). I think I will keep that in the theme, it has no effect if the plugin is not used.

I had tossed in the WP-Tile plugin as a way to display the entries in “mural” of the featured images, randomly ordered as an alternative to the regular recent first ordering.

Categories allow us to display all of the team project ideas submitted to the Chopped Challenge as well as the five that went to the final round (I add the categories later to add ore organization to the site). 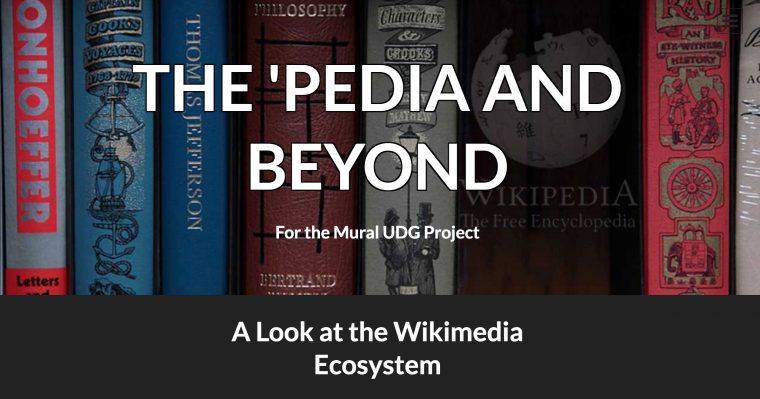 … and we ended up not using it, but it still makes a good resource to leave behind.

Maybe the piece I am most proud of is not even a SPLOT (it’s that good it does not need to be made into one).

On the original design was having a place pre-event to launch some discussion/conversation. Previously in the UDG Agora we used a discourse site which to us was too much overhead. I thought about using just comments on the sites pages.

But I also remembered on the playing around with the P2 theme which was made for a WordPress-based discussion like space (it was never used). The “threads” are just posts, and the replies are comments, so no accounts are needed to participate.

The P2 theme is pretty old, and is not responsive. In a few minutes of googling I found Mercury, a response P2 child.

Oh did this work great, we collected over 600 responses to various questions in a week. 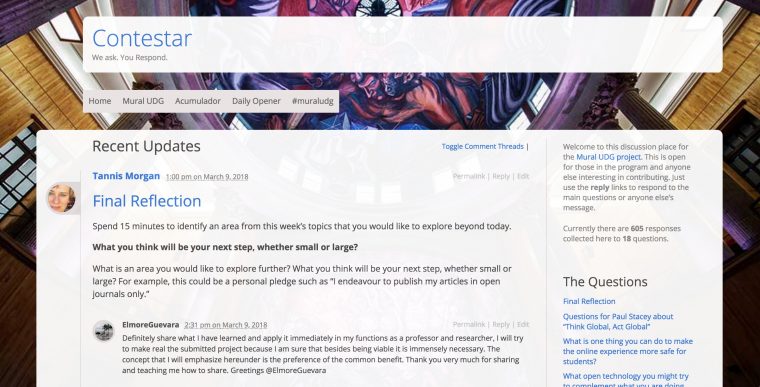 The pre-workshop question on Wikipedia use helped us shape the focus of the first day’s topic (I proposed, “If you feel Wikipedia is unreliable… then you should edit it to make it more reliable!”).

Under live use, I saw that the front page ajax updated as new responses came in. On the fly we spun up ones to collect questions for our hangout guests, to share links to H5P things they created, and a space to write their final reflections.

This theme works so well for a light weight question/response place. I will definitely use it again.

I also like to think for the participants using these tools, knowing they are built on a platform like WordPress that they can use themselves, is maybe the best message we could send about using technology.

If people use a snazzy platform, they might enjoy the experience, but it should change everything if they know it is something they can do all five R’s with: 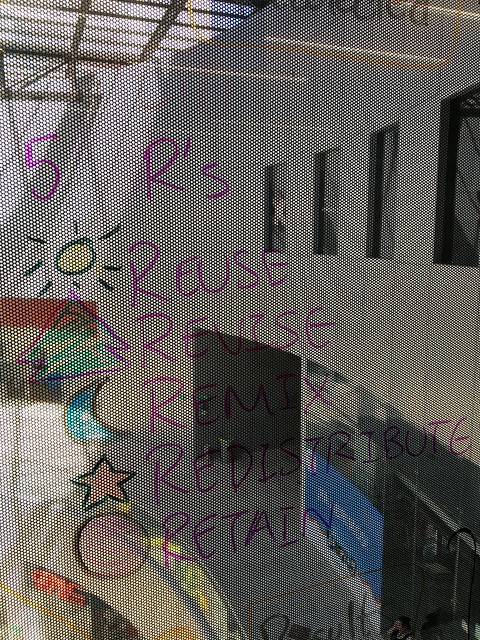 Featured Image: Superimposed a WordPress logo upon An adobe wall flickr photo by Luis Marina shared under a Creative Commons (BY) license