It is definitely NOT Ok, Google. The rationale for shutting down Google Reader smells like my old tennis shoes. You bring in gazillions of bucks on ads and you cannot aford to leave a service running as is? Show us the numbers! Make the Web, don;t breaking it. Bad, dog, Google, you are a very […]

Sure I want the newer camera and video capabilities. I want a compass. I want the 32Gb of space. I want the speeeeeeeeed. But like others who find the notion of an “upgrade” for buying the most recent model an interesting term….. apparently the pirates known as AT&T want to Ssssssuck more money out of […]

cc licensed flickr photo by Zervas One can hardly read a twitter stream these days without tripping over a boat load of hash tags (for those knot sure of what twitter is or what hash tags are, please go check out Oprah or some other oracle, I am not feeling like explaining everything…). First of […]

cc licensed flickr photo by deadrobot Good gravy, if you are going to send me spam-mail, at least make it a worthy effort? This one “Your Tax Refund” from supposedly the “Canada Revenue Agency” makes those Kenyan inheritances and dutch lottos seem legit. I really expected more from Canadian Spam, and I am way disappointed […]

I will tap into a generational nerve (if you get no response, read someone else’s blog post) with a curiosity as to how, over time, the answer to that sacred answer was changed: Yes, I never liked the Owl’s cheap answer, and always thought the number of licks to get to the center of a […]

I am far from alone being in individual ramrodded by a company that takes your money for a service it does not provide. But these dinosaurs are in denial of the asteroids raining down on them, as the net empowers us to put their evil deeds into the light. This is my little experiment to see if a single, frustrated, beaten down customer can take on a giant smelly pirate. Help me out my casting foul words and links their way.

Hence, I am here to tell you the tale of the Alltel Pirates and how they have me chained to their brig. Oh how foolish I was to fall for their ship! 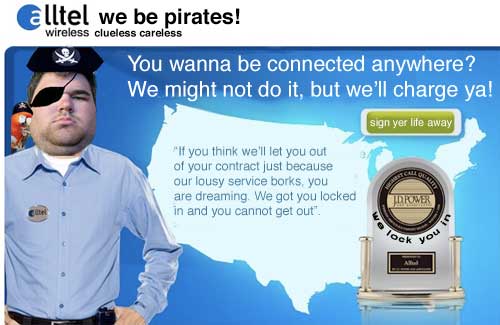 Once more, we have paid for a service not delivered and we must pay to get out of the contract. A contract is an agreement, where I agree to pay (which has been done) for a service to be delivered (which has not been done). I should not have to pay to break a contract that Alltel has not fulfilled.

So instead, I wish to take them down via the power of the internet and social networking. Tell everyone you know NOT to sign up for ANY Alltel service. Spread the word.

With that, a tale of pirates…

I am a die hard Google junkie. For more than 2 years, iGoogle has been home on every computer I use, while others clamor about their RSS tools, I just dig and dig Google reader, Gmail is my hub for all my non-twitter communication ;-) and I put all my time into Google calendar.

Yet, I have a gripe. It’s the menus that are supposed to make it easy to be moving around my Googlespace. For the longest time, there were no menus in Google Reader. Then a few weeks ago, Reader just disappeared from all menus.

But lately I am just looking at these menus, static, and saying, “Boy are you dumb.” Let’s say I start in Gmail…

Do you want to have fewer blog readers? Are you tired of pesky commenters who disagree with your posts? Is there something to be gained by frustrating users? Here’s how… Just set up your blog so users have to create accounts and log in to post a comment. Heck, they already have 50 gazillion accounts, […]

It’s been a while since I barked about the clumsiness of LinkedIn but just had another one of those near deaths by lame interface design. But before that, i am still trying to fathom what LinkedIn offers beyond the ability to just link. It seems utterly recursive with no ending condition to stop the loop. I am sure I am missing the supreme benefit, and get tripped up by their spurious claims of benefit.

Good golly, 2008 is not even 24 hours in the bag, and I am blogging about spammers. You can certainly see something I did not put on my resolution list (which, in fact, is another one of those zero item lists). Spotting spam sometimes takes some detection, but other times its a simple matter of: […]