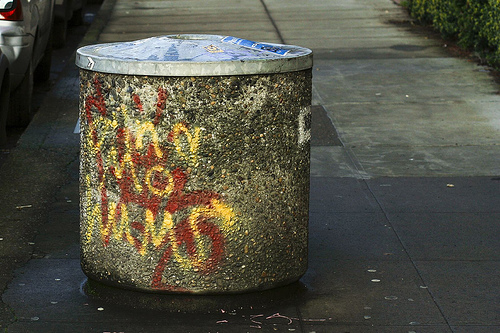 One can hardly read a twitter stream these days without tripping over a boat load of hash tags (for those knot sure of what twitter is or what hash tags are, please go check out Oprah or some other oracle, I am not feeling like explaining everything…).

First of all, I completely get, grok, and am on board with the desire, the reason for hash tags. Twitter as is, lacks anything in its architecture to allow cross grouping oh content. And hash tags do fill that purpose, though IMHO rather awkwardly.

But before going there, I again wonder about our cranial capacity to keep track of hash tags. Event ones are of course short lived. I have been gaming them, toying with them for a while but creating what I call #totalUselessAndRidiculous tags. Just for the fun of it. Just to through a spanner in the works. 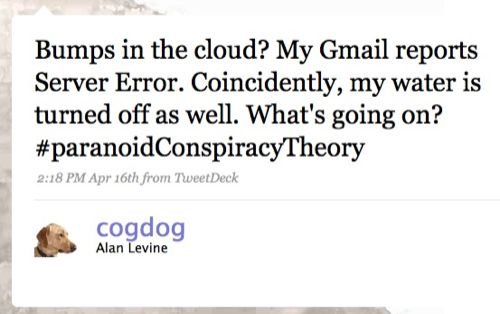 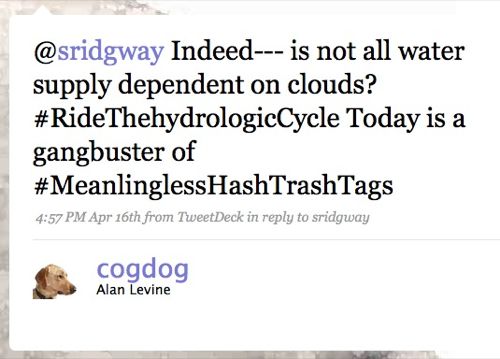 captioned for Stephen Downes who hates screen shots of tweets…

Bumps in the cloud? My Gmail reports Server Error. Coincidently, my water is turned off as well. What’s going on? #paranoidConspiracyTheory

@sridgway Indeed— is not all water supply dependent on clouds? #RideThehydrologicCycle Today is a gangbuster of #MeanlinglessHashTrashTags

And speaking of trashing hash tags, read how Nicholas Carr looks down his lucid and mind boggling nose at what is being called “hashmobs” — people who instead of assembling in a real place to do something (Flashmobs) just gather around some recent hash tag, jumping in with 140 characters of pseudo action.

The members of a hashmob gather, virtually, around a particular hashtag by labeling each of their tweets with said hashtag and then following the resulting hashtag tweet stream. Hashmobbers don’t have to subject themselves to the weather, and they don’t actually have to be in proximity to any other physical being. A hashmob is a purely avatarian mob, though it is every bit as prone to the rapid cultivation of mass hysteria as a nonavatarian mob.

Of course, Carr is a #RealBigTimeAuthorTooBusyToBeBotheredWithBlogComments so we must…. never mind.

But now to the hack part. Hash tags are a pure hack. If twitter had some foresight, they might have created a real tagging structure, where the tags are not messily embedded with the content (besides the point that tagging your content takes away from your space for content). They are not microcontent-able. They are glommed on.

But at some level, IMHO, they are silly and another, they are a wretched sloppy implementation of a workable tagging environment.