It must be bluntly obvious that I am infected with ds106 (for readers lacking exposure to the virus or the ability to reach for The Google, ds106 is the open Digital Storytelling course now in its second year of evolution, spreading out of the University of Mary Washington.

With MOOC Hysteria continuing an epic rage through the public consciousness, I waver from mild annoyance to blissful yawning to often… “meh”.

Today, I could not be more pleased to see that ds106 is not on a list of MOOCs — assuming that it does not “conform to the original format developed by George Siemens and [Stephen Downes]”.

The structure and modality of ds106 seems to remain a data point of its own. Besides I’ve never really wanted to be part of things that are so “conforming”.

I did have some thoughts about the image Stephen did share with his OLDaily post as a comparison of different network models of scaling, essentially the faceoff of xMOOC versus cMOOC 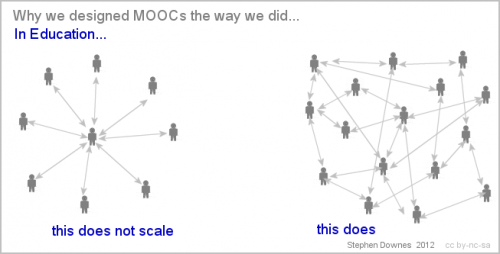 And here I wade into waters I will perhaps drown in since Stephen is way more steeped in network knowledge than I.

But to me, actually the diagram on the left actually scales well– depending on what is the thing at the center and how much it can pump out. That is the model of mass production, right? So it can scale (whatever that means). The question is, what is the quality of the thing it is scaling? Its more about the things on the connection lines than the nodes, right? And is it just the scaling that matters (e.g. WE CAN TEACH 180,000 STUDENTS WITH ONE TEACHER HA HA HA yeah right).

And the network model on the right, what is the quintessential cMOOC conformist types, what happens if that scales? To me you get more and more of the same pattern, repeating to the horizon (the dry lake is not the metaphor, I just think in terms of natural patterns). 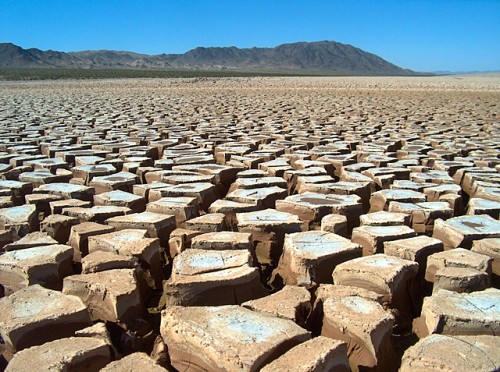 I totally am a fan of the networked approach to online leaning that really Stephen and George broke ground with in 2008 (and they never get credit in Time magazine). I see it as more better, this connectivist model of George and Stephen. But to me- it’s not really a purely even distributed network as depicted, with all nodes equal– there is some hub, some centrality of the course itself, the thing people are networking about. There is dependency on the open course site to be open.

What these digrams describe are the relationships of the people involved in said courses. I see another dimension as being important.

What I tried once before, in citing the differences of ds106 from their other bovine named courses, is to try and call it “fractal”, saying that scales were for lizards. To me, all other MOOCs, be they x or c type, sis to create the same content/curriculum for everyone in the course- they all do the same tasks. And to be honest, the framing points are actually weekly lectures, be they videos spawned out of xMOOCs or webinars. The instruction in these modes are teacher centric (even if people can banter in chat boxes).

In ds106, what we provide the open participants is not intended or designed to be the same as for the registereed students. It is not a scaled copy.

The structure that happens in ds106 ends up being more like localized cells, revolving around the different courses affiliating with ds106, like now sections 1 and 2 at UMW, the section for York College, previous semesters when we had classes at Temple University in Japan, Kansas State University, etc.

Outside of UMW’s ds106 courses, these are other classes that have some overlap, but are not the same– they are part of ds106 but not ds106 as we teach it at UMW. The overlap is in the use of student blogs to publish their works, doing creative challenges from the Daily Create or the Assignment Bank— all of their work aggregates into the main ds106 site and paths cross on twitter, flickr, etc.

I described this as a fractal model, because of what I saw as the quasi replication at different places, but was schooled on this recently:

I totally accept that fractal is not really the right metaphor (and I will try to avoid playing wit the phrase of “fancy decorations”). Maybe it is more of a network of networks model (you kind of like the way the Internet itself works). Or rhizomes. Or pickled beets.

Might ds106 be more of a decentralized network model?

That’s the problem with network diagrams. You can get mired in the abstration.

I will need Martin Hawksey to appear in the corner to explain for the visualization-impaired, but this as generated from an export of the ds106 wordpress site including almost 20,000 blog posts

And there is more visuals courtesy of Mr Hawksey. His mad genius set up for gathering/analysing twitter data in a Google Spreadsheet has been piling up date since August of this year, and we are just starting to play with the visualizations his TAGSExplorer generates – here is one you can play with based on this data shows not only the clusters, but you can drag nodes around to see the relationships and the data: 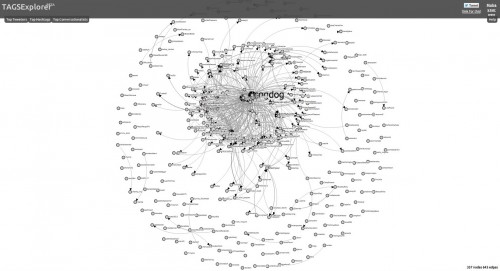 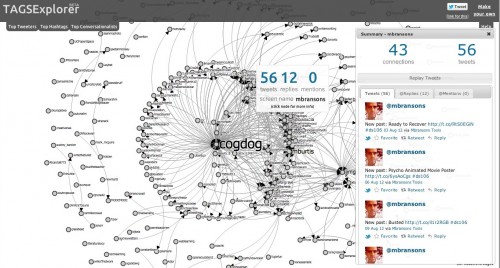 And even with this, I am sure if *it* is the underlying model either.

I don’t care if diagram model is right, what I care about is establishing a different way of thinking about doing open courses. I don;t care about talking about the theory of MOOCs or having MOOCs on MOOCs (kind fo caniblistic). I’d rather be doing / teaching my open course then bantering about it.

But we’ve been doing this stuff at ds106 as an open course now in our fourth full semester, plus having run different iterations in 2 summer sessions. We have no lectures. We run the bulk of our class out of an open assignment repository that users create te work for others to do (and have not even seen anything like it elsewhere). We have a course where people who are done with the class return a year later to do assignments. We have a place where open participants not only give comments to students, but sometimes work with them on group projects. While we do have these local cells, the boundaries between our groups blur and merge. We have a radio station and a community that extends way beyond the class. When the ds106 classes end at UMW– the community keeps on going. Where the course ends and the community begins is grey.

But wait– there is more. Ben Rimes has started a 106 book club as a way to connect people over readings. We had a summer camp in 2012 that even had a store of swag. There was a telethon to raise funds to support the radio station. In the first year Todd Conaway made the first ds106 radio t-shirts.

Where does this occur in those MOOC things? I guess there has been Udacity t-shirts and I guess Coursera does barbecues — but hey, those guys have gazillions of dollars!

Oh yeah, we are not getting any venture funding. Nothing from Bill Gates. Heck, our community kickstarted money to support us (has any other MOOC done THAT?) – over $12,000!.

And so in some ways it can rankle when the stuff we are doing is not mentioned, but actually being out of the limelight is better. I kind of like flying below the radar. It keeps you knowing where the ground is.

ds106- it ain’t a MOOC and nor is there ant MOOC that has got what we got. Is it a better model? I don’t know, and the approach is not one we see as stamping out carbon copies of. But for what we are doing, it is as close to magic dust of the cosmos as I have seen in 20 years of education technology.

Nuff said. I got teaching to do, and art to make.