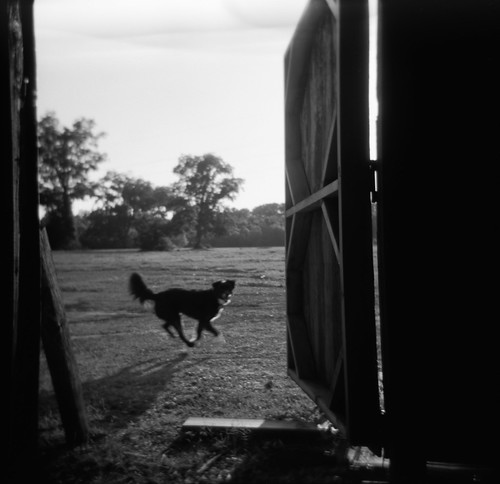 In the spirit of Doing the Work We Assign Our ds106 Students, I just made my own Sound Effect Story– the assignment as stated:

Tell a story using nothing but sound effects. There can be no verbal communication, only sound effects. Use at least five different sounds that you find online. The story can be no longer than 90 seconds.

I’ve done this one twice before, one a story of keys another of something that might have happened while walking in the woods.

For this one I tried to do something that has an action and maybe an ambiguous ending. If you own a pet, its likely you have something that happened when someone left a door open. And I have my own tale of a dog that was lost… For anyone that has dealt with a lost dog, sorry. I hope it is the story (like mine) where he/she returns.

This was created in my usual audio tool, Audacity and using sounds from my favorite source, Freesound.org (yes you need to create an account to download, worth it). I had an idea for te sounds I needed, a door, sounds of a dog running, some ambient outdoor sounds, a person whistling, a dog dog barking- these are my sources:

The Towns or Suburbs track was useful as a background for its variable bits of wind, distance voices, vehicles to give a sense of being out doors. The dogs running track had people’s voices in the beginning which I deleted. 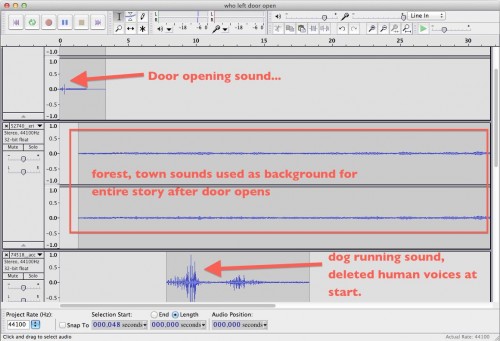 I played a bit with the other sounds. The whistle was short, so I copy pasted it to create several versions, and then used the shift pitch to make the last 3 sound a bit more frantic.

Likewise, I replicated the Far Dog sound and decreased the volume so it would sound farther away, and truncate the last bark followed by a bit of silence to end the story: 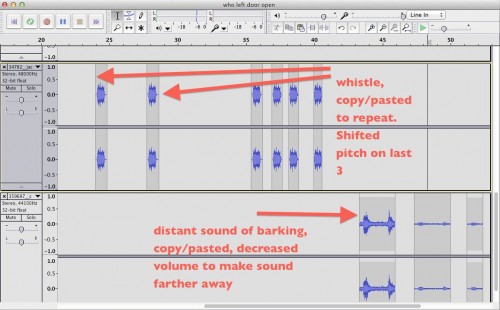 And there you go! Make sure that door is closed, will ya? 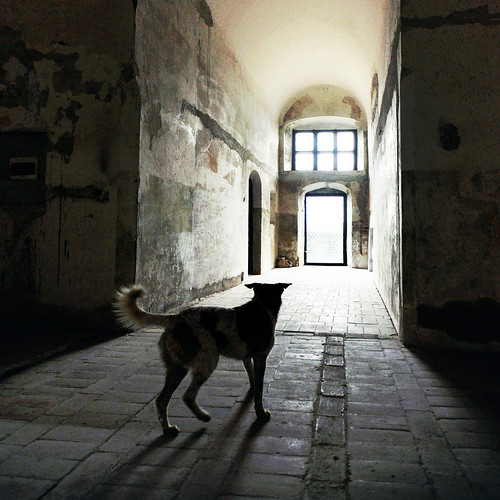