My menorah is put away, but it seems such a nice symbol to GIF, maybe have to slip it in under Ben Rimes’ GIFmas Card assignment (the first rule of ds106 I tell my students is to change up and break the rules of an assignment, if it makes for good art).

Do you need the whole story? I would think the Macabees would dig some GIF miracles. 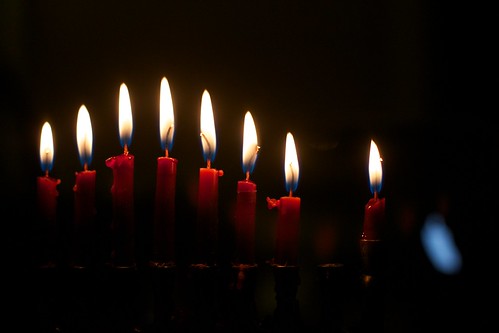 But that’s no problem, I was able to magic brush in a copy of one of the middle candles to fill the gap. i also managed to lose two flames by… well I think I forgot to paste. So I copied an isolated flame, and flipped it horizontal to make it looks little different

This baby weighs in at only 48k! That’s because I have isolated single flames to a layer, rather than replicating the entire scene. I copied each flame to its own layer, and then painted in black the space behind for the background. I use the animation palette window menu to convert the Layers to Frames. 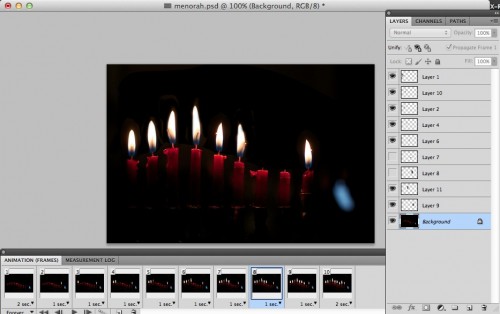 Then it was a matter of turning on layers sequentially for the sequence, and adding some longer time for the first and last frame.

Doing the GUFs in layers, and using it to only place things that change is the MAGIC to making GIFs you can really generate a lot of movement and not make it bloat up to me a 2 Mb file.

If I was going to notch it up a level. I might make duplicates of the flames and flip them, so I could make them flicker across frames.

GIFfing it up for Channukah! or is it Hannukah? or is it ??