Here comes my epic multi GIF bonanza as part of the ds106 GIFfest, it might fall into a Multi-GIF story. 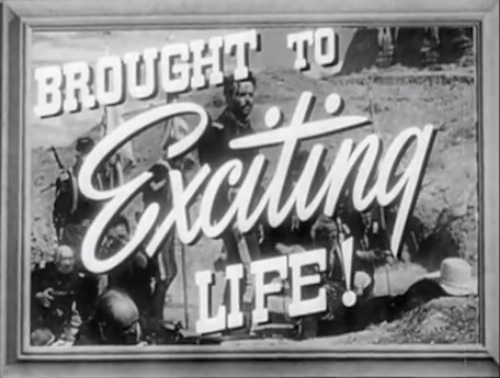 What follows are 16 GIFfable scenes from the 1948 John Ford Western, Fort Apache. Rented from the nifty little library in Pine, AZ, the movie appeals on several levels, first because of the iconic scenery of Monument Valley it might be 100 miles from the real Fort Apache). Yes, the mittens are familiar, but it’s that vast space the Ford used so well to back narrate the story.

You also have some name stars, John Wayne, Henry Fonda, even a adult-ish) Shirley Temple. It’s a slice a bit different from the typical cowboys versus Indians, though both are present, but really dives into the tension of the white settles who had lived long enough in the southwest to appreciate and understand the land and te people versus the Eastern presence represented by Henry Fonda’s Colonel Thursday, who blindly put his stature, class, and textbok ideas above the common sense of those like John Wayne’s Sergeant York.

Among all of this is also a bit of slapstick humor, especially the local Irish Cavalry men, who had little interest or respect for Thursday’s formality.

What follows is not a recap of the story, but some key moments that, to me, are drawn out by the GIF process if isolating scenes and ten narrowing them down even more to 3-14 frames.

The opening scene brings the arrivale of Colonel Thursday and his daughter, the unlikely named “Philadelphia Thursday” to Fort Apache, the “distant outpost”. The opening jockeying of the drivers, laughing it up, contrasts with the uptight expression fo Henry Fonda’s Colonel Thursday– and Philadelphia? She;s mesmerized in her Big City hat. This extends into their arrival, as no one is even expecting Thursday, who is flustered at the lack of formality.

I liked the repetitive pattern of the spinning wheel here, that cried for GIFfing.

GET MRS O’ROURKE! In showing the importance of people here by their reputation, a call is put out (literally passed down the sidewalk by person to person) to find Mrs O’Rourke, the woman who apparently gets things done. Help is needed to young Philadelphia Thursday, who has asked for help in getting her new home in the Fort set up.

This scene two had this great pattern of the message being passed down the sidewalk, and then return as Mrs O’Rourke ran back up the sidewalk.

Did you think there would not be romance on the Fort? That was also obvious in the first scene, that the newly arrived Philadelphia would be smitten by the younger Michael O’Rourke. It was this horseback ride out into the wilderness that would set the stage for the conflict with her father.

But here, out in the classic landscape of Monument Valley, it’s all goo goo eyes.

Henry Fonda plays the prim, proper, and out of place Colonel Thursday to a tee. He’s all about formality and West point, and doe snot even realize how out of his element he is in here in the Southwest. He’s all paperwork.

I like how the last frame capture the pencil tap.

These two soldiers a recut loose from the stockade to go on a special detail. Young O’Rourke returns from the horse ride with Thursdays daughter, with news of the slain cavalry men and cut telegraph wires. The new Colonel is both furious at the young O’Rourke for having been out with his daughter. He does not see him of being the same class, but is also impressed with the young officer’s report. These two Irish soldiers are sent to fetch the bodies of their comrades who were slain, and express their anger at loosing their buddies.

Given his experience and relationship with the great Apache Chief Cochise, Sergeant York (John Wayne) and the Spanish speaking/translator Sgt Beaufort ride out from Fort Apache to find Cochise down in Mexico. It’s a long journey (ironically they are seen at the top edge of the Goosenecks of the San Juan River, and then even crossing the river at the bottom, although this is geographically north of Fort Apache. Geographic license trumps scenery.

Here they are sharing their last bit of water, passing the canteen. This is one of my favorite GIFs, as it seems to loop around perfectly.

A very short sequence here shows the presence, calmness, and assuredness of Cochise, played by Mexican actor Miguel InclÃ¡n. This sequence focused on Cochise, but the background shifted around a bit. Since this was only 7 frames, I went in and traced out his figure, and removed the background from the frames, leaving one solid background, in this way isolating his movement.

Another key moment here that shows the respect between Sergeant York and Cochise, while at the same time realizing they are caught up in a larger battle. Here York puts his arms out to match Cochise, and give a respectful greeting, of “Buenos Tardes”- I love the framing here of York under the long rifle of Cochise’s comrade.

This begins a sequence of GIFs representing the readying of the Cavalry to head out and meat Cochise and his own army, who is heading back believing that there is an opportunity for peace or to be treated with respect. He had led his people away fro the reservation that was supposed to be a safe place, but was abused by the profiteer who ran the operation.

This is an amazing sequence, which was, as described in the documentary on the DVD, filmed in infrared film to enhance the power and contrast of the skies. Apparently the actors had to wear brown makeup to keep their faces from being bleached out. But its also, how they are filmed almost as “statues” .

FORWARD HO! They march out, York still believing that they are headed out to follow through on the offer he and Cochise had agreed upon.

But Colonel Thursday has no interest in keeping York’s agreement. He belittles Cochise, speaking with disrespect, and demands a respect he has not earned. Thursday is under a false delusion that his rank in the US Army has that much power.

Cochise realizes he has been tricked, but also that it is this “great White Father” from the east, not his friend York. But there will be a battle, and here you can sense his disgust as he looks out over the Army. The INdians, however are going to eb perched high on the cliffs over a narrow canyon, the trap is set…

And there they go, in a nice neat row marching right into the trap! Like good soldiers…

Thats te end of my GIFs, though of course, not the movie. There is a battle where most of the army gets cut down, including Colonel Thursday, and the final scene years later, where we learn that history has overly glorified and magnified the role of Thursday, which, in many ways, is likely a parallel for Custer.

There it is 13 GIFs for this movie! What a trip.