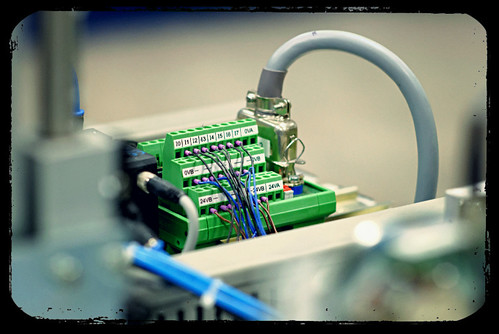 Late night fiddling, don’t ask why– I was doing my photo editing and saw nothing on #ds106 radio, so set out to play somethimg from iTunes. For some reason, Nicecast no longer allows me to select an application as a source (Maybe because I installed Audio Hijack), so I switched by rig to Ladiocast, especially since the ds106 radio status page was not updating at all. Previously, I found I could manually push updates to the metadata via Ladiocast, but this seems manual and tedious.

I mused before searching

Not quite sure anymore what generates metadata on #ds106radio, NIcecast fails

Searching on “itunes metadata script ladiocast” I then easily found a nifty Applescript for Ladiocast Automation.

It’s pretty easy to see what it does; polls itunes for a new song, and if it is different from the last, it updates the meta data thingie in Ladiocast. The other feature I like is that it tests if iTunes has stopped playing, and if so, it plays a short playlist (as a signoff audio) and stops the stream. This means, you could set up a show as a playlist, let it rip, and go outside or sleep, and it will end gracefully (no snorecasts).

First I made a short recording to be the signoff, and added to a new itunes playlist “radio off”

I then looked at the script and decided to fiddle– it would be nice to add something to the meta data beyond the song title, like a #ds106radio tag, etc. So I modded the script to provide text input to add an option meta data prefix, and suffix.

I saved it as well as a stand along app if you do not want to script fiddle. The idea is you would start a stream, run a playlist as audio, and then launch this app to manage the metadata pushing.

When you start up the app, you can add the prefix and suffix (it is optional) 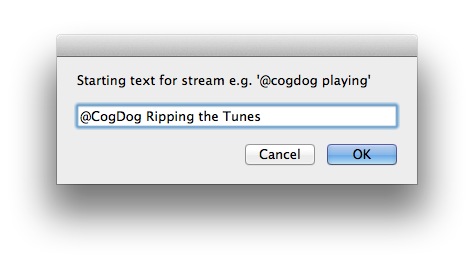 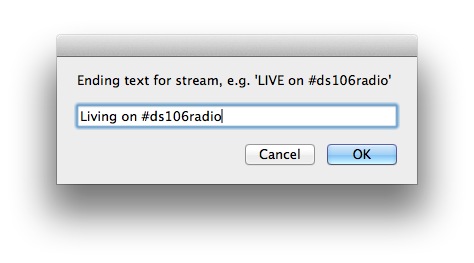 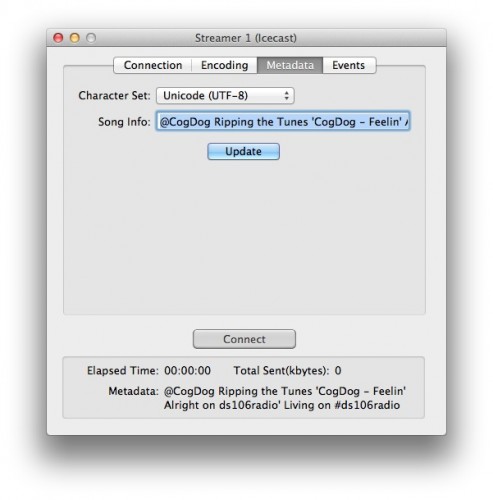 It does work, though I wonder if i ends up a bit twitter spammy if I include my handle or hash tags 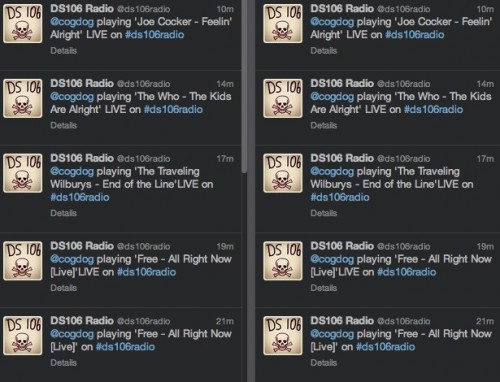 Anyhow, this is just a bit of fiddling ‘n futzing. Maybe its of use to someone.