What is going on here at CogDOGBlog, taking the side of the cat? But you see, the way I saw this video, the poor cat was just trying o sleep at that Lil Tramp kept messing him up:

This is an example for my ds106 students of this week’s video assignment. Here’s the deal- in weeks 7-8 while we were working in audio my students were charged with generating 30 seconds of foley sound for the action in a segment of a clip of Charlie Chaplin’s The Circus. They tagged their clips in SoundCLoud to match the section of audio (well except for the last section, cause the teacher had a typo in the original lesson).

The assignment for this week is to use those FOley segments and the original clip to make a new story. In my story, What’s a Cat Gotta Do to Sleep Around Here? it’s is from the lion’s perspective, who just wants to sleep to rest for the show, but he keeps getting disturbed by The Little Tramp who bumbles around the Lion’s cage, making noise, getting the dog to bark. Poor cat, just wants to snooze.

The sounds I used were:

I grabbed this photo of Emma for my opening title sequence, found in compfight searching flickr creative commons based on “grumpy cat”. 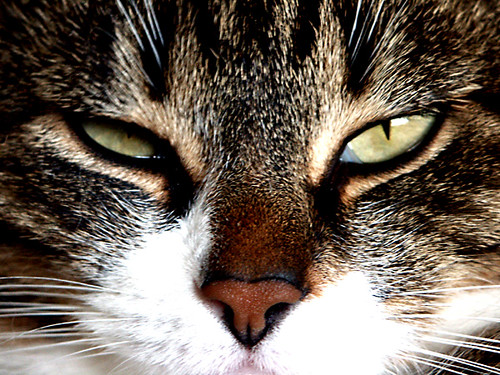 The music is from the awesome incompetech royalty free music site, I look edin the “agressive” category, choosing a track that was a bit more modern than the original clip — Take the Lead by Kevin MacLeod licensed under a CC Attribution 3.0.

Here is a screen shot of my iMovie project: 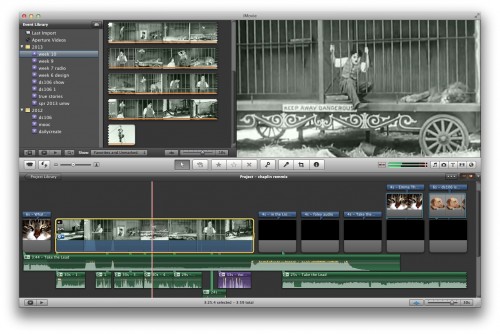 I dragged and dropped each audio file under the section I wanted it to appear at, moved it to try and match the action. The purple is a bit of extra dialogue to fill what was missing. The “Take the Lead” track stretches across the entire project (I used it twice to extend the end). For each of the other audios, I used the audio option to “duck” the sound track beneath it. It ends with credits, i brought in the extra graphcis using the picture in a picture option (you get these by enabling the advanced options).