We know comments on YouTube are bad. Really bad. And what are the great minds and engineers at Google doing?

Therefore, a small distributed group of technical savvy pissed off Mom’s have developed a new internet protocol invoked by calling #MoPoCoPa. With reverse geolocation DNA gene tracking database realtime quadro facto lookup, an offending commenter’s Mom can be summoned through a time reverse sequencer and presented in situ to the rude party.

Leave it to Moms to clean up the net. 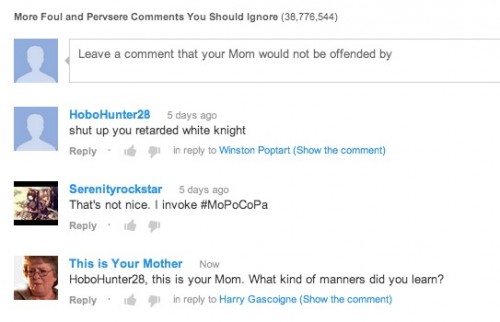 This was my last (for now) Mozilla Webmaker effort, this time using X-ray Googles to do a complete makeover of a YouTube page. It took little effort to find a video with rude comments, like 3 clicks to find some video from some show I know nothing about. 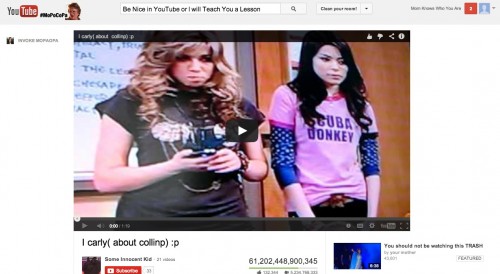 I have used Googles for previous ds106 units where we do a thing called Storytelling in The Web, with the idea of using an existing web page to be re-written to tell a new story.

The thing with doing Goggles is that most people just tweak a few things. I tried to hit almost every element of the page, and added a number of animated gifs.

A few of these I opened in Photoshop and removed tha background to make background transparent, and resized them to be the size that would fit in the right side suggested videos:

The latter meant to look like Mom was sitting on top of the video.

I also made this one, that was trimmed nicely as a user icon when added to the page

I loaded these on my own web server so I could reference them by URL in all the IMG tags. These could be used if you wanted to remix another youtube page

I modded almost every button, link name, etc. I even went in manually (via the advanced editing tab in Googles) to change the “thumbs up /down” icon to only by thumbs up, because Mom Says It is Not Nice to Not Like Things

I’m not too sure of anyone would really remix this, but you can apply Googles to a page created by Googles. It at least lets you see what I did.