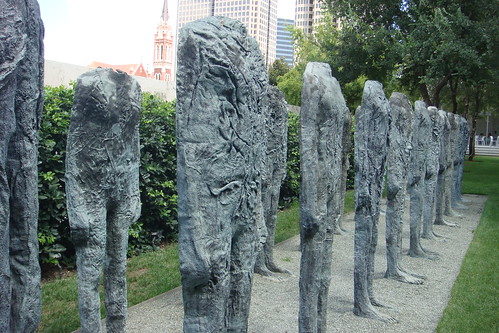 The Headless ds106 Experiment is mostly over, in the never really over way of ds106. I had a great time, we saw a nice wave of new energetic folks come into the fold, and we ended with a big bang of a project that was not even in the plans.

You will most likely never read about this in the New York Times, Slate, Fast Company, The Chronicle of Higher Education, not even the Weekly World News. That’s fine by me.

This post has sprawled far past the reasonable bit size attention span length everyone seem so acknowledge. I planned to close with this, but for TLDR or whatever it is–

Massive online learning in numbers does not interest me at all; what does is massive amounts of creative effort by perhaps a small core of participants and a lovely long tail of activity by a larger number.

To recap the original idea…

Since January 2011 ds106 has been taught at University of Mary Washington (UMW) and other institutions as a course for credit but also has at the same time been open to participants from the web (learn more about ds106). However, for someone new to ds106 as an open participant, it has not been very clear what they can do (we’ve made some suggestions as a starting point).

Because UMW is not offering a formal course for Fall 2013, I had a thought”“ what if we set up a syllabus based on the previous iterations of class, set the weekly assignments as scheduled posts, and invited people to participate in it as a course w/o a teacher?

It was not simply copy old posts and republish… I greatly underestimated what it would take to remove the parts of previous UMW classes that was specific to them, take out wording that says “required”. About halfway in I started trying to add a weekly video, arttcle link, etc as an “inspiration”… sometimes toed to the topic, sometimes just more general.

So we have a complete syllabus of the experience. More on a plan for this later.

What did you learn? For the long haul, you need a continual flow of people reaching their own peak ds106 experience…

I sometimes use the phrase “infection” for the manic state some people get when they immerse themselves into ds106. My peak experience was the Spring of 2011 when I probably did every bit and more of the open course, and the only reason for my stay in here is I have gotten infected with the insides of the operation.

There is a long list of people who have had peak experiences, who are still “in” ds106 but in a less participatory mode. You cannot really do a second peak experience, so its natural that people who were once heavily involved tail off. It’s the natural order.

No xMOOC will every have a talking doll as a key participant.

I could go on and on, and am probably leaving out more than I mention. Sorry. 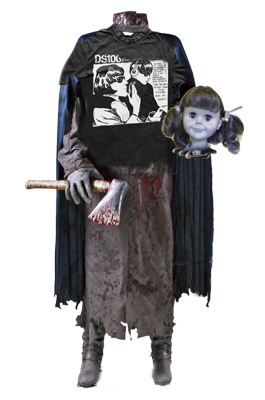 So what was refreshing this time was seeing a solid group of people more new to ds106 and watching their peak experiences roll out. Some peaked out, my new mantra is all glasses are pleasantly partly full.

Special Headless recognition goes to Rochelle Lockridge, who may have had a second peak ds106 experience, and took this class where I would have never predicted, inside a corporate firewall at 3M (look for more on this as it expands). I think she is still peaking, but her devotion and detailed writeups of assignments are exemplary.

I also want to call out Marian Funes, our ds106 Shrink who was there for every step of the way as both a creator and a community encourager, and asker of big questions. Her 106 bullet points about ds106 are right out of the Bags of Gold. And as well, a thanks to Christina Hendricks for being there in the cracks of her busy schedule and Sandy Brown Jensen Brown Jensen Brown :-) who regularly contributed Daily Creates,rich poetic videos, questioned GIFs, spearheaded a radio show group.

The other addition was the emergence of the ds106 community in Google Plus. While I do not dip in as much, the size and devotion there was a catalyst that in many ways, worked better then in twitter. Out of there emerged the idea and creation of a collaborative storytelling site based on a series of animated GIFs (and again the community comes in, Michael Branson Smith setup a site for this).

There was a whole series of riffing on a GIF that started from a single daily create by Rochelle of her grandson towering over Stonehenge, ending up down a rabbit hole.

And then the whole strand of glitching (which came from?? an experiment by Michael Branson Smith??), John Johnston creating an app that made it much easier, which now features sound?

I cannot even cite all that went on.

And it was a question of the Headless ds106 to see if the community could motor on without a designated UMW class.

How about that data? I’m glad you asked. Well, maybe. Who are you? Oh I am you are me…

I decided out of my own OCD curiosity to try and gather some weekly stats on ds106. What I tracked, every Monday at midnight was:

A few times I was late to grab the data, but the revisions features in Google docs allowed by to back collect, and a few times for the ds106 posts, I had to do some calculations based on the dates of posts in the wordpress dashboard.

I would have liked to track some data from Google Plus.

I kept this in a google spreadsheet with some columns to math out the weekly levels of activity (not weak activity!).

Ahh, but I need a Pretty Chart(tm) 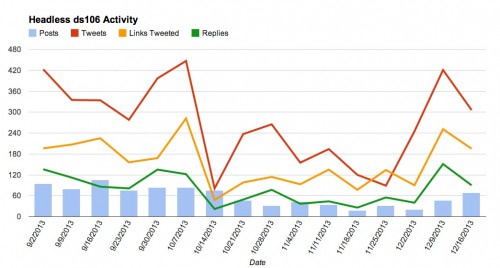 What I can tell you from watching the activity all along was we did have falloff of activity after the mid way point- with the rising action in twitter around the release of the group project radio shows (which were outstanding).

I have seen the exhaustion too at this point in our UMW students as well. The group project is demanding! This was why for UMW we followed this with what we thought are lesser taxing parts of doing Stories in/of the Web, and a observing week for video.

But the video and remix portions of the class take a lot of effort too, and largley people picked and chose what they wanted to do, or did Daily Creates, or went to non ds106 activities.

I debated whether to even add the final project in, heck I did not even feel like doing one. But I wanted it to be in the syllabus for future use.

And the remaining headless participants did what I love best- they trashed my project idea and did their own. They spoke- they wanted to do a group project, and it was one that so unfolded in the best emergent this is really how the internet works way, around the idea of this fictional (really) GIFaChrome camera. In itself, it emerged from a ds106 assignment, and gathered momentum from there.

You cannot peak more highly IMHO than our live radio broadcast event. It was ds106 and radio at its best (so far).

Is there more? Always. Lost in the shuffle of the final radio show was an attempt to gather the “Best of Headless ds106.

Here was the idea- ask people to tweet links to their personal favorite work, tagging it #ds106headlessbest. I set up another TAGs spreadsheet to track this. From here, we hoped people would than select the work of others they found inspiring, and submit them to the ds106 in[SPIRE] site… I ran out of steam there. But I like this as an ongoing way.

What’s next for ds106? How ironic, I look up at my computer clock, and it says

For Spring 2014, there is no ds106 class scheduled for University of Mary Washington (Jim has said he is teaching a summer course). I am teaching an online 10 week version for George Mason University starting mid March, and this will be open as well.

I can see packaging the headless syllabus and assignment posts as an on going, self paced option for people who want to go through ds106 at its own pace. I wonder, ponder, and still cannot say for sure whether the weekly pace of an open course needs to be at that pace.

The Daily Creates will keep going. I cannot stop wanting to see it go on. Doing a 4 day building remix and nagging people seemed to have some success. I am hoping to re-craft the way the Daily Create works, so people could submit a link via a tweet, rather than having to use specific media services (and I plan to turn this into a WordPress theme one could use for their own Daily _________).

I also have to knuckle down and finish up the ds106 Assignment Banks as a theme too, thats on the front burner now, to make http://bank.ds106.us/ be something other people could customize and use.

There was some talk and banter at our closing ds106 campfire about perhaps another “container” for ds106 in January. And Seth Goodman tweeted an idea that is mildly resonating

I made some quip about 12 sided die, but have chatted with Mariana about this. Maybe if I blog it, John Johnston will build something ;-) Or Tom Woodward will Markov me into some weird mix. And for the 2.5 people who maybe got to the bottom of this overly long post, here goes.

Let’s say a group of perhaps four people decided they want a ds106 experience. They decided if they want it to be a week, two, a month. There is a gizmo thing on the ds106 site, maybe with some input parameters, maybe totally random, generates a “quest” for them that might include:

Or some kind of list of things they are charged to do.

But what I have learned from the Headless experience that there ought to be more creative ways to create these open experience containers than a ____ week course.

They can be headless. 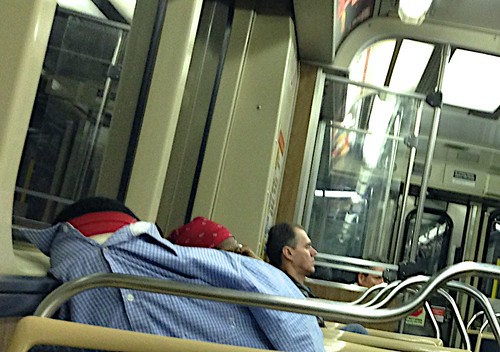 And do you know what they call a course that ends?