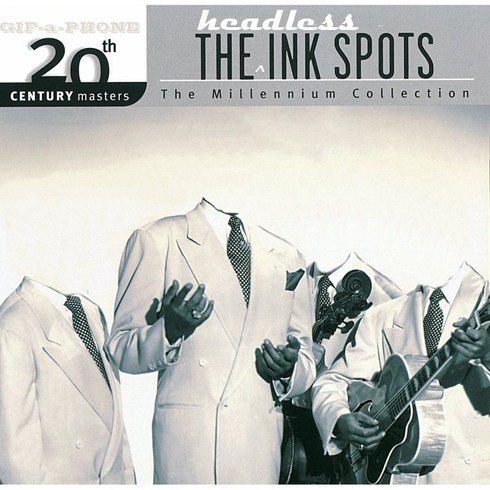 I have no idea how to even blog what culminated today for headless ds106. Maybe it was because what was in the boxes. Trying to write this up sells it short. But one ought to try.

This is in lieu of a more comprehensive it-might-be-blogged-one-day-before-the-sun-burns-out post for what has happened the last 15 weeks since we launched this half baked experience.

Today, we ran a live performance of what has emerged over just a few weeks, and completely supplanted the idea of having a final project in the course.

The entire GIFaChrome idea (see a narrative of the unfolding) emerged from Rochelle Lockridge’s effort at a remix assignment… and it just mushroomed from there to glitch art in Google plus, John Johnston’s app, an amazon product page, layercake technplogy, dogs giffing, commercials, music, and then it jumped over the shark into a narrative of its own and its own web site, twitter account, sock puppet characters…

This was totally emergent, the things that happen in a community of motivated, mildly to severely obsessive people, and just a spirit of invention and riffing ideas.

In ds106 we;ve have had the experiments with the class as a narrative — the Summer of Oblivion and Camp Magic MacGuffin. These were ones crafted by the instructors; a key thing is that the GiFaChrome story was completely the idea and driven by its participants.

So today we ran a live ds106 radio show where there was planned product announcements; we had a house band, the Inkspots (music lovingly produced and performed by David Kernohan and Vivien Rolfe, they are simply amazing), commercials and testimonials produced by the group, interviews with characters, and the grand unveiling of the new products, and something awry at the end.

A big thanks to today’s cohosts on the stream– Christina Hendricks, David Kernohan, and Mariana Funes, plus the contributions of John Johnston, Amber Lockridge, Christina’s son, Vivien Rolfe for the audio content. To say this was a group effort is not even giving enough indication what kind of crazy production went into this, and in something like 2 weeks total (the show was maybe done in the last 5 days).

Here is the archive of the entire show:
ds106 Radio Archive for GIFaChrome Launch

And some of the separate segments if you wish to sample

I volunteered to man the audio and run the stream; this was with my usual setup of funneling system audio through soundflower into LadioCast (which acts like a mixer), and sending the output form Ladiocast into niceCast to do the broadcast and archive. Skype has its audio routed in and out with soundflower so participants can hear the stream without having to tune into the stream (which is 15 seconds behind anyhow). Here is how crowded it was on my desktop 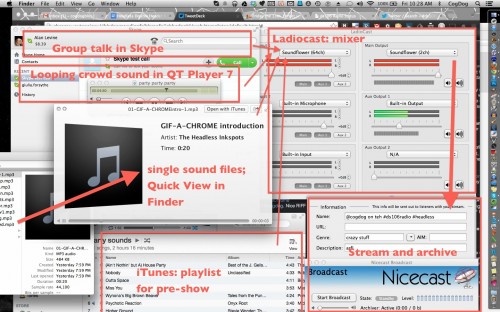 A few different things here. I wanted a background crowd sound of people at a party; I found a few clips from Freesounds, and made a single file in Audacity. I played this through QuickTime PLayer 7 so I could manage its own volume, plus I can set it to loop in there and just let it run.

I had iTunes there just for the hour before the broadcast to play music from a shuffled playlist. All of the audio segments that were pre-recorded, I had in a desktop window, named in the order they would be needed: 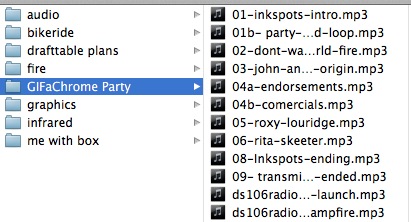 When I needed them to play, I just did the click on file name and spacebar to do the OX S quick preview, meaning I could play the audio without putting opening them in an application (when I do this in iTunes, I have to watch the overlapping it does at the ends of songs). It worked well 9but ti does mean you cannot be fishing around looking for files while the segments are playing. 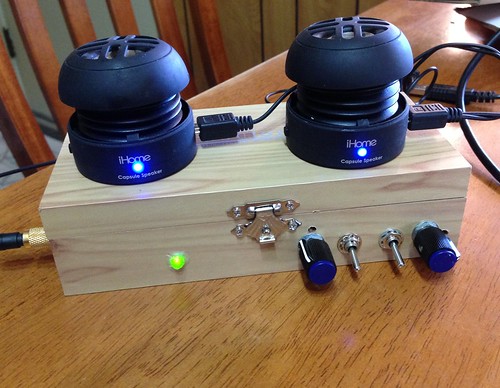 And then I played the last “End Transmission” audio and killed the stream.

It was a wild ride.

And the funny thing, as we were still in Skype after the stream was off- my clock said it was 1:06pm: 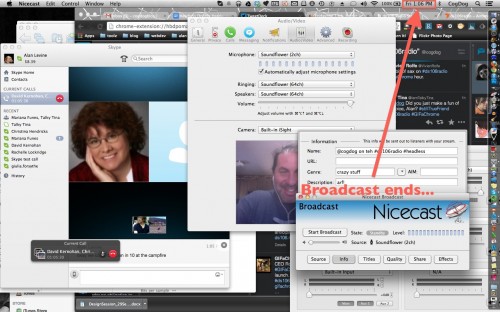 The broadcast ended at 1:06pm! Click image to see the clock

But that was just the first half of the show. We took about a 10 minute breather, and then convened around a virtual campfire (this time the looping background sound was campfire with some owls and coyote yelps) to doa bit of ds106 debrief.

It was great to have Todd Conaway call in, and there was some ideas brewing via Twitter from Seth Goodman and Tom Woodward

something with creating spontaneous cohorts, and 12 side die. Check the archive, my brain was fried by this time

We did get to play a reprise of one of the mid term audio show projects, Rhonda Jessen and Karen Young created another Cooking with the 3T’s show and the highlights of Rochelle’s ds106 inside of 3M experience. And I plum forgot to play an excellent discussion that Mariana Funes and John Johnston made as a “european” reflection on headless ds106.

Like I alluded to, I hope to unpack a bit more of the headless ds106 experience. As usual, it snuck up and became all consuming (in a good way) (I think). The idea of a courseless course makes me smile. And it worked, maybe not to plan, but hey, plans are made to be broken.

Until then, for some other reflections see:

Here’s to the crazy ones. 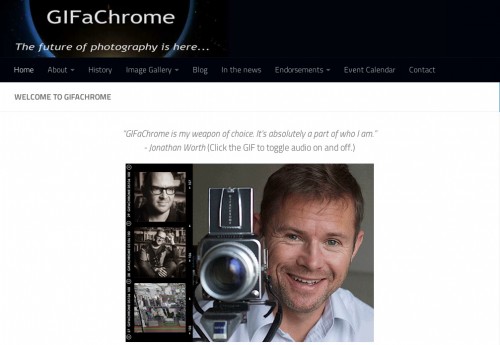 And as usually, it might be easy to mistake the goofiness and the play for what really happens in the vortex of ds106. Ask any of the participants about the skills they ratcheted up in this production. Ask about the new alliances forged. Ask about the impact of creating a living and evolving narrative, of building a digital presence for a story.

Dig here for a sto

Next up for #ds106 the hydra (as opposed to headless)