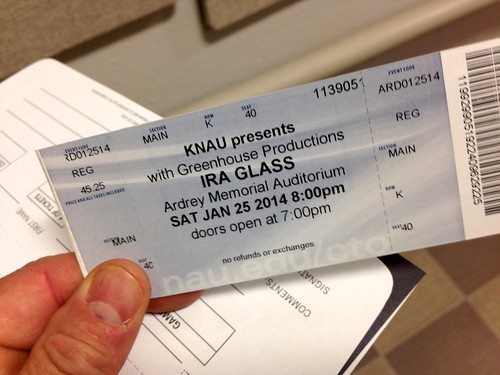 To cap off a full weekend, after attending the SCC Tech Talks on Friday I headed north to Flagstaff to catch the show by Ira Glass at Northern Arizona University. The great irony is that I found out about this show via a tweet from my friend Grant Potter in Nova Scotia.

I ought to brain dump all I absorbed from the show; it was just that good. I have no photos. There is a possible chance I accidentally clicked a button on my phone and opened a ds106 radio stream. I am just not sure.

He entered on a dark stage, all we hear is his voice. He was carrying some sort of tablet device he used to control the audio clips he played, and the light from the screen was all we could see. And he began talking about how intimate the form of audi is, how it might make more sense to just do the entire show in the dark.

Which of course was a set up. The lights came up, as did the applause. Glass made some jokes about the sound we all knew comsing from the body we did not know.

From my row K vantage point, he carried some resemblance to our new old new old radio friend, Scottlo (where are you brother, where are you?).

A fair bit of the show went back to the fantastic Glass Manifesto post I discovered last week, He contrasted the difference between typical news coverage, CNN style of booming music, and authoritative “We know the story” voice, and the different approach done on This American Life. He emphasized that notion of their style having one layer being the plot, the person’s story, and at the same time, the importance of it illustrating a message about “the way the world works”.

Often I talk about how people new to storytelling string things along like a series of events– and I framed that as a negative, but Glass spoke how that is the narrative flow that pulls you along, if crafted well. He used the example of “Just Keep Breathing” the story of the New Zealand girl who was bit by a shark. And her story, she does tell as a series of events, but as Glass notes, once you are in– you cannot leave that story. “Did she die?” was a funny line. The thing is, the story, told in the subject’s voice, traces to the larger story of a common human experience of parents not believing what their kids say.

There was a middle section where he explained all the times he spends on the phone with lawyers– dealing with smut. The laws on what can and cant be said on the radio are apparently a moving target. The prologue about a traveler’s dilemma of using the Knee Defender was a problem because the subject referred to himself several times as “not wanting to be a dick”. Apparently one use of this is allowed, but multiple times is considered “dwelling on it”.

Glass played examples of how his questioning technique always tries different angles to get the interview subjects to say in their own words, the large message of an episode. That focus on getting the key elements from the person, not summarized by a narrator, is important to remember.

He gave a lot of insight into the making of the Harper High story. It began with an interest in covering one of the Chicago urban schools, where the death rates of students was outrageous. He playfully described how a TV news would have to do so much to generate the feel, but how the format of audio gets to that closeness and intimacy carried by people’s stories, not recorded to see. The crew from This American Life spent 5 months developing the story, and it turns inside out your stereotypes of what gangs are about.

Glass did a lot of banter with the audience, a funny riff when he acted surprise to find Jews in the mountains (“Outdoor Jews? That’s crazy”). He referenced the journalism students in the audience. While there was an outline, he spoke rather much like you were just sitting around a dinner table.

I noted at least 8 or 10 times, he referred to recording as “getting it on tape” or “reviewing the tape”– although they work digitally, he uses the old media as the reference to anything recorded.

There’s way more, and I might have to dig through my cobwebs to get to an answer.

I did get a chance at the Q&A section to ask a question. The audience was slow to raise their hand, so I got the second one. I was thinking all along about a way to ask him to say something I could record as a bumper for ds106 radio. It just sounded so cheesy, and I really wanted to ask what I ended up asking. I did mention I was a fellow Baltimore born kid, and yelled out the name of Milford Mill High School, where I went, and he did a few years before me. That seemed really lame, as I was never a big cheerleader of high school, and there I am pumping my fist.

Anyhow, my question was noting that This American Life gets a lot of submitted story ideas; the stories come to them, and I wanted to know what he woudld advice to students about finding the angles into stories. He talked about getting a sense and try a lot to come about ti with not just the news type questions. He talked about his frame for a story on weather when he moved to Chicago, and found the angle through people’s experiences who were struck by lightning. He talked (like the transom piece) about how it took him 8 years to get the right way if doing this– and even played that early clip of him telling a story trying to “sound like an NPR guy”. He reminded us that we tend to forget that others have to work long and hard to get to the well known personas we know.

And then we went our separate ways. Ira missed his chance to hang out on the deck in Strawberry. 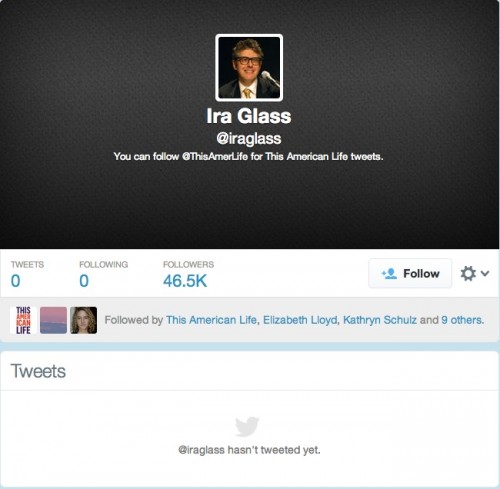 That’s how you get to be when you are that good.