Does anyone set out to go down such a hole? It all started because Matt Rafalow contacted me- he was hoping to use medium.com to publish his work for Connected Courses. Simple, I thought. I knew medium publishes RSS feeds for user accounts. RSS is RSS. It should Just Work.

Well, these RSS feeds do work in a Feed Reader. Because they are generally forgiving on the format of the feeds.

But Matt reported an interesting problem. He tested his URLs. But when he puts it in the forms on our site, he gets a message that it’s not a valid URL 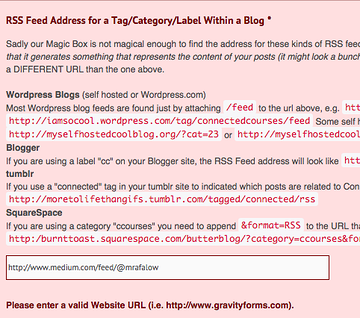 It looks like to me that the URL validation code on the Gravity Forms plugin is failing on the “@” in the URL, although technically, it is a valid, though not common, construct for a URL.

The thing is, I cannot contact Gravity Forms Support because I did not purchase the plugin, it was the folks who run the site.

The hole got deeper as I failed to validate the medium.com RSS feed, could not get Feed WordPress to process it, and even unable to cleanse it through Feed Burner. I wrote a detailed post on medium about how their feeds are messed up.

And then there was a bright light in the rabbit hole. I got a detailed response from Nick Santos, apparently an engineer who helped build medium.com, and got a lot of answers to my questions.

But I am still left hanging without a way to add Matt’s medium content to Connected Courses.

And then I heard from the Genius in Scottland

@cogdog hmm weird not sure what's going on there. Thought was server block but pipes okay http://t.co/hP3lNQ7zNX

Martin Hawksey strikes again, he found an end around. I’ve set up a Yahoo Pipe where you can put your twitter handle / medium user name (same thing) and it will fetch the RSS and route it out again as an RSS feed from Yahoo: 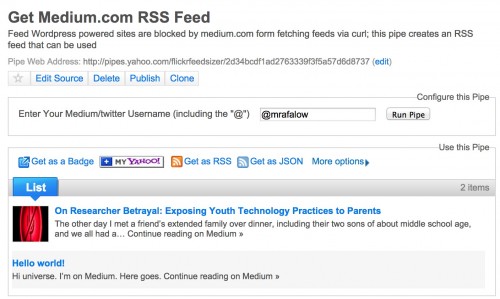 I can then get the RSS Feed for Matt’s medium content from Yahoo Pipes, hook that into the Connected Courses Feed WordPress, and BOOM! Matt’s got syndication.

I agree with the title of Nick’s response, it not only takes a village to read an RSS feed, you might need a Scottish Genius.

Thanks Martin, your card’s value has just gone up. 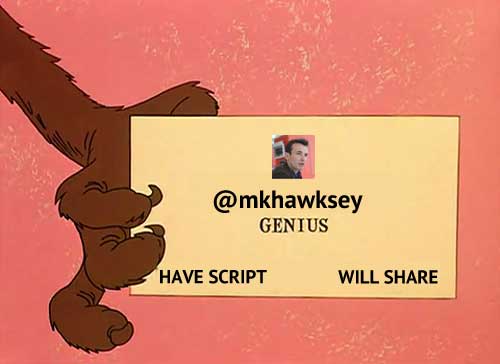