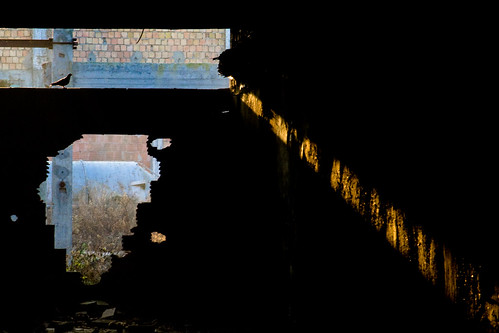 Or shall I for the first time toss at a TL;DR?

No, this is not too long, and it matters not to me if you do not read. This is for me to spill out some thoughts.

While I was enjoying mostly a “not look at the online stuff” extended visit to Vancouver, some sort of comment party busted out on a post around here. Not that it counts as participation.

Jon Becker posed a provocative question and others chimed in before I saw it:

I think it’s time for an honest look at participation in cMOOCs. I have a sneaking suspicion that participation wanes in ways that some wouldn’t want to admit, particularly for “courses” where there’s no *real* incentive (e.g. credit, PD points, etc.).

Also… how big is the group that carries on with #etmooc?

And, honestly, how many people really, truly continue to particpate in #ds106?

So how does one actually take an “honest look at participation in cMOOCs”? What constitutes participation? Connected Courses has clocked over 1770 blog posts from 239 blogs. I do not have access to the database to run a query, but my hunch is if one ran a frequency distribution for the authors versus number of posts, we’d see something like a long tail emerge: 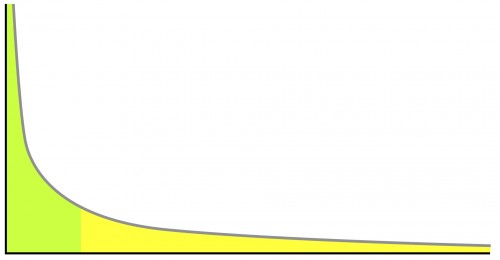 And maybe a similar curve if one graphed the number of days people participate in cMOOCs.

This would be perhaps waning participation.

So we look at MOOCs (c or x), see all those signups, and see how few people are present at the end, and call it a loss. Look at all those who did not finish. Dropped out. Or did not post a blog post. Or tweeted twice and vanished. It says participation is gauged by the volume (like loudness). 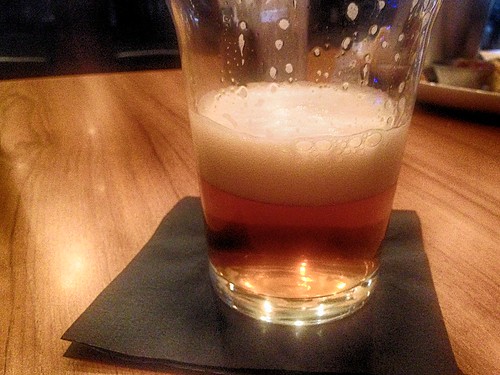 Frankly, I think this is the wrong portion of the glass to be looking at.

And I think we do not see the secondary, tertiary ripple effects of the participation we do see. Or maybe I am just an optimist. But people who have experiences in Connected Courses, often use them in ways we never see. They may get incorporated into their teaching. Maybe months from now or maybe right away. They share ideas or discuss them with colleagues not in Connected Courses. They have discussions between each other in more direct channels that are never seen elsewhere.

Of course this is my own supposition. My own irrational optimism? It almost is belief bordering over into faith.

I have no data.

But I read things like Laura Ritchie’s Blogging it For #Ccourses. Sure Laura has been pretty regularly tweeting. We could count that. But read her post. There’s stuff there that would not show up unless she wrote about it.

She’s teaching a music course right now where she is rolling her experiences into it:

MUS654 has been an experiment for me – throwing myself and my students in the deep end and overall they have really taken to it. I am not sure that running a course on creating a curriculum is necessarily the best choice if the course is to be appealing to a wide audience, but it has made the first inroads to reach a wider community and it has certainly encouraged my students to get out there and think wider.

She’s “connected” in with another music class, a high school one:

Last week another class of mine connected with David Preston’s high school class. We all learned ukulele as an initial hello activity so we could play with one of his students and some of my students came in one evening to make the link. We certainly had a few challenges to negotiate with live cross-continental communication, and how it all changes when you try to play music collaboratively.

So here her experience is rippling out, diffusing into another teacher (and his students) not even in Connected Courses. This would never register in anyone’s course analytics.

And also with another class, not even a music class, but photography:

Some really neat face to face 3D (as Maha would say) connections have been born over the past week. Some of Jonathan Worth’s #Phonar students are working with a cello piece that I recorded, and one contacted me… and I arranged to take her to meet the maker of my cello, Malcolm Combes. How cool is that!? This guy is a legend to me and I love that part of his story is now going to be connected and told through another medium. I love that connections don’t always have to remain online.

Connections that don’t have to be online.

@GoogleGuacamole meanwhile, I need your help. @cogdog and @sensor63 are pigeonholing me as a "measurement" guy :) http://t.co/1sIFtv5Kao

but I do not see any pigeonholing- Jon you asked about numbers of people who are participating, and suggesting (unless I am overstepping) that the relative numbers are low. Numbers, numbers, numbers, no measurement there. Reminder-:

And, honestly, how many people really, truly continue to particpate in #ds106?

You see, I do not worry about the people who “participate” less (and my point is how do we know what that level is?), and relish the ones that participate more. Because I do not think we need to have massive numbers of people doing this at a high level, that their rippling out effect can be more effective.

I see in Laura’s blog post, actions that seem to reach at least 40-60 other learners/teachers. Yes, I cherry picked one from someone who might be tossed into the active participating bin of someone’s data analysis.

I know you are not a measurement guy Jon, neither am I. My point I try to make is the stuff that can even be measured for participation is not the stuff all that interesting.

But the real question I think Jon was getting at is if there is meaningful participation (or outcomes, or ??) from open courses, like Connected Courses that do not have a grade/stake/incentive attached.

Relax Jon, you are not in the pigeon hole.

There is no right or wrong here, as heck, I am only throwing out partly baked hunches. I got no proof. But I think the stuff that you see as “waning” participation has much under the water line we do not see.

And the stuff that is in the bottom of the glass is quite powerful. Much more potential than speculating about the empty space above. 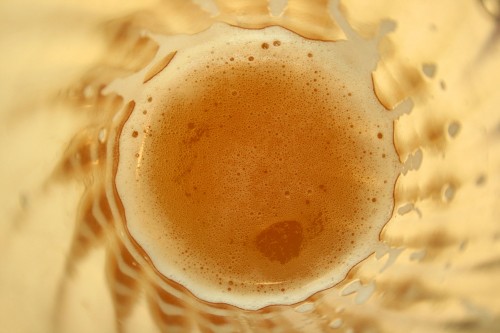