This concept could be big. Huge.

Whilst looking for something else this morning, I opened a sealed box. Besides finding my Masters thesis and a box of old black and white print photos, I found this box of HyperCard diskettes, still sealed inside their protective plastic holder. The box is dated 1987, and the paper inside indicates it’s version 1.1.

This was on the shelves of our software library at the Maricopa Center for Learning & Instruction, my first ed tech gig. Sometime in the mid or late 1990s, the space was redesigned, and much of the software, even dated by then, was commissioned for the trash bin.

Besides “liberating” the HyperCard software, I also grabbed a copy of RenderMan (still have), and shrink wrapped MS Word and Excel (those were sold via eBay to someone in the UK).

To run this innovative software, you will need a Mac Plus, Mac SE, or Mac II, and at least 1 MB of RAM. Oh, make sure you are running System 3.2 or later.

I’m not breaking the seal on the floppies (I doubt they are readable), as they would not run on a current machine– thought I was stoked to find a virtualized version that I can run on my 2014 MacBookPro.

But am jazzed by that simple turn of a phrase on the cover; to repeat– A Personal Toolkit for Information.

What does that mean? Allow me to quote from the back of the box (emphasis is mine)

HyperCard™ is a powerful new information-management software that allows you to create, retrieve, and customize information, and then organize it on your Apple® Macintosh computer just as you would organize it in your mind; by association.

But can we easily, in 2015, organize information just we would in our minds, by association? What software does that, as an addition to creating, retrieving, and customizing information?

And while it speaks to the Apple® product, there is something key in a software that lets us do this on a personal device or space. Is it a personal toolkit when it resides on a third party server?

Now you do know (don’t you?) that the software in this box influenced the minds that brought us the World Wide Web and the wiki. Is what we have in 2015 a personal information toolkit? Does it achieve this purpose:

So it can become more of what a personal computer was meant to be: a versatile tool you can turn to almost any purpose.

I started my job at Maricopa in 1992 with a fragmented portion of experience programming in Pascal and Lisp from my failed CIS degree, and most of my programming before was in FORTRAN and some BASIC.

But my skills were launched with the original personal information toolkit; no one taught my HyperCard, I found my way via looking at the stacks of others shared in places like the Info-Mac Archives. 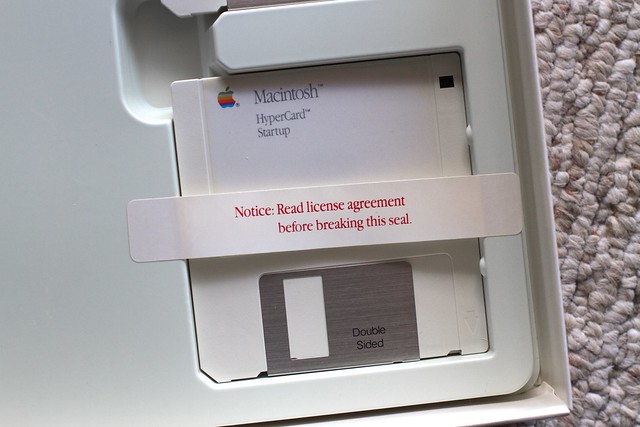 People shared their stacks, did not lock them, meaning they were open to me to learn from. I learned scripting and message hierarchies. I learned to communicate to external devices vu=ia XCMDs and coding to the serial ports.

In hindsight, some critical characteristics of this personal information toolkit were: 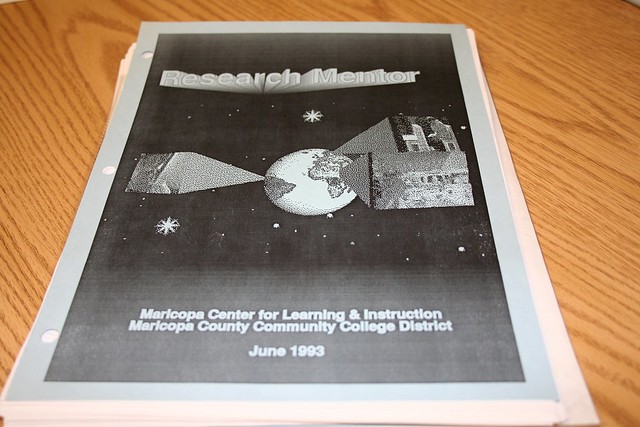 If I look at my web tools I see a lot in web scripting jQuery that gets at that near limitless potential- you can write scrips that create scripts on the fly, and wholesale address almost anything in a document object model. But there is nothing (or I have not seen) the equivalent of the high level construction tool that does not require code experience.

Where is this for web scripting?

And the message bar! One could just put code right in there and run it, or send messages to anything in your stack, command line style.

I expect perhaps some quibbling from Mike Caulfield (but wait I will bring in the FedWiki below), but in my web work the last few years, and especially working on the SPLOTs at TRU, I find a lot of overlap with WordPress– it can be run at both the GUI level and also deep in the programming level. And like HyperCard, what Iw as doing with SPLOTS was using one tool (WordPress, or maybe more technically PHP an MySQL) to create things that in turn were tools for others to use.

I’ve had my two happening times with the Federated Wiki, and I am holding on some out of sheer respect for Mike’s fervor and way of explaining things. I feel that there is something there there, but I have not gotten the full on click.

But the FedWiki, even moreso than WordPress, is geared to that Hypercard concept – to organization information in the way our mind does, by association. And it does so in a technical construct free of dependencies on databases and servers (I think).

The hurdle remains, for many new users, a baffling interface. I could say it does have the two levels of operations, a few of the more fervent followers have dug into the json guts of the thing. While it sounds like I am criticizing the interface, trying to make it more “approachable” may likely make the problem worse.

And you know what? I created some terrible interfaces in HyperCard! 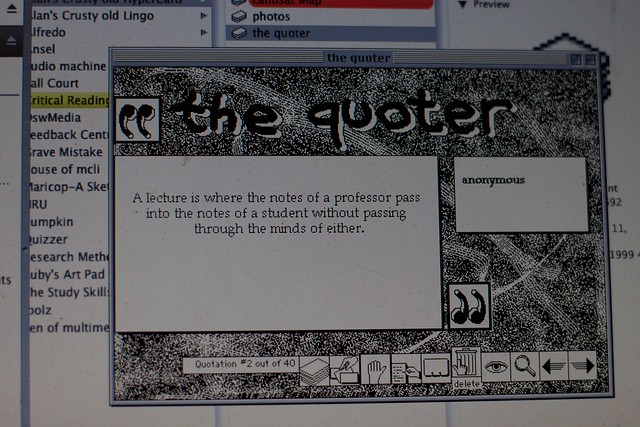 Once more time, though– this notion of “the ability to associate information on our own devices just as we do in our mind” is where I want to be.

So where is that?

flickr photo by cogdogblog http://flickr.com/photos/cogdog/16822372044 shared under a Creative Commons (BY) license