Someone never told the folks who participated in the 2013 Educational Technology and Media MOOC that it was over. They are still at it.

FYI: @courosa @cogdog just to let you know #Etmooc in 30 in case you know anyone wanting to join in ? ALL welcome

They’ve held anniversary celebrations, reconvened to discuss ETMOOC for Connected Courses, and are running online hangouts two years later. There’s a hashtag community in Google+ (wow, I did not even now you could do that), a postetmooc twitter account.

I missed yesterday’s session (was actually out bikeriding), but Paul Signorelli capture the highlights as a storify

Ironically, that photo is the one I tweeted Susan Spellman Cann when I got the tweet while out on the bike.

Now it’s now secret I see the ed tech world through the tint of my ds106 glasses. People will sometimes rally a cheer when #cck08 is mentioned, rhizo14 and rhizo15 have strong pulses, but ETMOOC often seems lost in the mix. It remains to me a compelling model that Alec Couros put into motion- engaging others to lead the sessions (so Alec was not center stage faculty), the power of a group shared activity as a first activity (the lip dub project), the pacing of the sessions to be two weeks long.

The site remains unshuttered and the blog hub continues to aggregate posts (4746 posts from 513 blogs). The twitter archive was stopped because twitter’s dropping of RSS (it can be done again though), but still when that happened, the site had aggregated 19,000 tweets.

I will cherish and take this kind of experience any day over some massive MOOC of tens of thousands of enrollees, 2% or so who stick around, and who’s corpus remains stockpiled behind a login. How long do communities from xMOOCs persist? 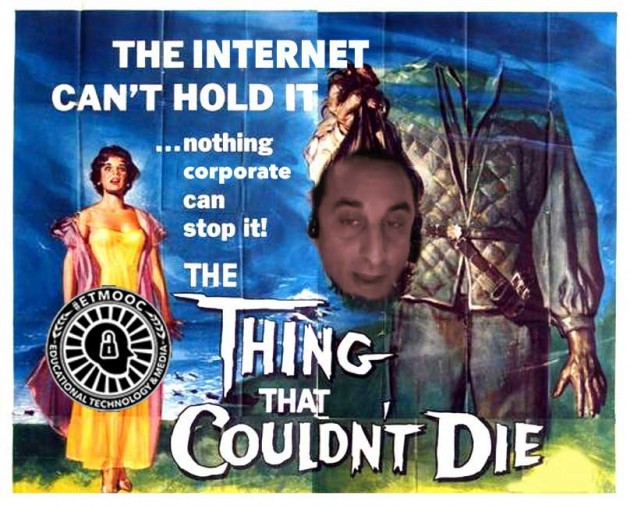 When Connected Courses was reaching its scheduled end, I jumped a bit over on the organizers who started using the “when the course is over” or “after the course” language. If you use terminal language the participants agree that the experience is terminal. Of course people’s attentions and energy will go elsewhere, but ETMOOC shows that it can have a spreading effect, and bringing in new people too.

I find little inspiring about growth for the sake of growth.

Okay, so maybe 100 people were active in ETMOOC? Maybe 15 are still at it now? 20? 25? The absolute numbers are order of magnitude, but I find more significant than 38,000 signups. But what those non-massive numbers are deeply passionate and the spread their ideas laterally, not by just copy/mass reproduction.

I’ll keep saying it- scales are for lizards and doctors offices; in terms of ideas I am way more interested in spreading over scaling.

There is a difference.