The subject line in today’s email held some promise:

I was a bit bust enjoying the beach and time with friends on my last night in Puerto Rico, so I left it for later.

And thus, I got another Rejection Letter from Facebook.

We reviewed the profile your friend reported and found that it isn’t pretending to be you and doesn’t go against our Community Standards.

Note: If you see something on someone’s profile that shouldn’t be on Facebook, be sure to report the content (ex: a photo or video), not the entire profile.

For more information about our policies, please read the Facebook Community Standards:

So once again, Facebook says “We will name drop our community standards but won’t enforce them. W think it is part of our community standards that scammers can create numerous fake accounts, use your photos to create a false persona for purposes of defrauding lonely women out of their money. This is Facebook, these are our values. We stand behind scammers, not you”

Notice this- they greet me as “Hi Alan”

I have identified flaws, inconsistencies in the Facebook reporting process that make it impossible to give them information about these cases– unless you count as important information a button labeled “other”– and that Facebook clearly does not enforce the very rules they throw in my face every time as a reason not to take down the fake profiles of scammers.

Facebook wants to assert one real identity for all of us– why are they systematically refusing to take down fake accounts?

So I emailed “Facebook” a reply… knowing full well that the chances of getting a response are really zero. But someone has to say this.

And someone has to ask why is Facebook keeping fake accounts alive? Why?

Dear “Facebook” (why am I never contacted by a human being?)

We reviewed the profile your friend reported and found that it isn’t pretending to be you and doesn’t go against our Community Standards.

Then you do not even know your own community standards.

To be clear, this account https://www.facebook.com/malle.gotfried has not only used my photo for their profile; it is the one on my Facebook profile https://www.facebook.com/cogdog and in their profile they have used other photos of me with captions suggesting it belongs to this account. You can find evidence of this in a facebook album where I maintain proof of this situation and several previous ones

This is a fake account. How do I know? I was contacted by a woman who was scammed out of a large sum of money by “Malle Gottfried” and found out when she did a reverse image search and found the photos “Malle” claimed were of him that she found on my flickr account (many more then were in the profile, and all of this transmitted through Facebook messenger).

This is a fake account. The Facebook reporting system provides no option to select even close to this besides “Other” and worse, provides no way to provide the proof I have. So Facebook makes these judgements based upon no evidence nor do you reveal they methods you employ to investigate.

By joining Facebook, you agree to use your authentic name and identity. You may not publish the personal information of others without their consent.

This person is not using an authentic name nor identity, and is publishing personal information of mine (my photos) without my consent Facebook thus is not enforcing it’s own community standards,a nd worse, is supporting the creation of fake accounts of scammers.

How about this? Facebook’s Help page for reporting fake accounts clarifies what kinds of accounts it does not allow

We don’t allow accounts that:

Why is Facebook allowing “Malle Gotfried” to use my photos? Why is Facebook’s highly touted facial recognition system not matching the profile photo “he” is using tot he very one that has been on my Facebook profile since November 2015?

Again, why is Facebook not removing accounts it clearly says it does not allow? Why is there no burden on proof of “Malle Gottfried” to prove their identity? Why does Facebook make it so easy for Nigerian scammers to create fake accounts using photos of other people? Why is Facebook not answerable to these questions?

I have reported this account several times, so has my sister, and friends who know me. And every time Facebook replies stating that the creation of fake profiles using my photo does not violate Facebook’s Community Standards– what kind of community standards protect the rights of scammers to create fake profiles used in romance scams?

Apparently you can get software for $5 advertised to:

IF Yes Then I Will Provide You Update Version Of

Another one claims to offer an ability to created thousands of accounts at once.

Note: If you see something on someone’s profile that shouldn’t be on Facebook, be sure to report the content (ex: a photo or video), not the entire profile.

This is utter nonsense. Every option in the Facebook reporting system for this photo leads to this suggestion: 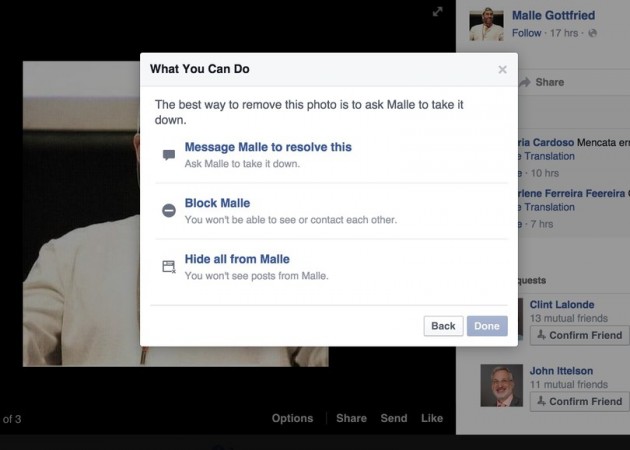 These options are worthless. There is no way for me to report to Facebook an issue with these photos. Are you that stupid to think that “Malle” the person who is using my photos without my permission in a scam opreation is really going to abide by my request?

This is the definition of insanity.

I request a reply from a human being. Is that too much to ask? Are there any human beings out there?

Another day, another day that Facebook sides with scammers and not me. This will not end.

Top / Featured Image: A Search on “dear letter” in Google Images (with restrictions on images licensed for re-use, always check, because I find a lot of images on web sites that actually have no license statement at all).

This is a flickr photo by William Arthur Fine Stationery https://flickr.com/photos/williamarthur/4639772572 shared under a Creative Commons (BY-ND) license