That first heady phase of the first round of DS106, back to December 2010, before Jim Groom’s first class very started, set the stage for the creative riffing ethos that is part of this crazy space.

Like free form music jamming, it is taking something someone else has played, not as a theft labeled copyright act of stealing, but using as a base to do something slightly different and new. Novel? It’s sort of how species like us evolved from proto mollusks in the mud.

Earlier this week, DS106 student at UMW @Gorgon_Chest (that’s what I know of him as an ID, cool) did a response to the daily create about “Make a Loesje poster (extra points for a western theme or message)”

#ds106 #dailycreate #tdc1505 Given a quote from MLK and a pic that makes you say the quote as Sam Elliot. Perfect! pic.twitter.com/Z5l11bVbYO

The funny thing is what he did is probably not quite the style as shown in the examples, but that’s the point of ds106, you, as creator, have the right to do something completely different from the assignment if (a) it’s interesting; and (b) it’s justified somewhere (hopefully in his/her blog).

How many other classes are you given liberty to not follow the letter of the assignment?

Anyway, the placing of a Martin Luther King quote atop a photo of Sam Elliot’s “The Stranger” cowboy character from The Big Lebowski reminded me totally of the classic DS106 Triple Troll Quote assignment (and itself riffed/lifted from Know Your Meme):

Find an image of a well known figure, add to it a famous quote by someone related in some way to the figure in the image and then attribute the quote to a third, related figure… This way, nothing about your image is correct, and you’re trolling fans of all three characters at once.

Classic DS106 indeed. It gives you room to riff on popular culture, and play on truth and perception, by putting together more or less information incorrectly (in an assignment-y construct) in a way that at first glance might be legit, but with just a little bit of critical analysis, should be seen as a false one. And the real beauty is not just putting together three random bits, but in a way so there is a theme to it all.

My first riff was to turn this into a new Daily Create that will go live Thursday (this link will work after it goes live at 5:00am EST http://daily.ds106.us/tdc1509/) (WordPress Scheduled Posts FTW).

But then I saw when open DS106 participant Terry Greene posted today:

He was doing this for the Triple Troll Quotes assignment, but I really thought it would be fun to re-do the assignment as he did, with rock stars. Take a photo of one rock star/band, overlay the lyrics of another star/band’s music, and attribute it to a third.

I gave myself 20 minutes to do mine: 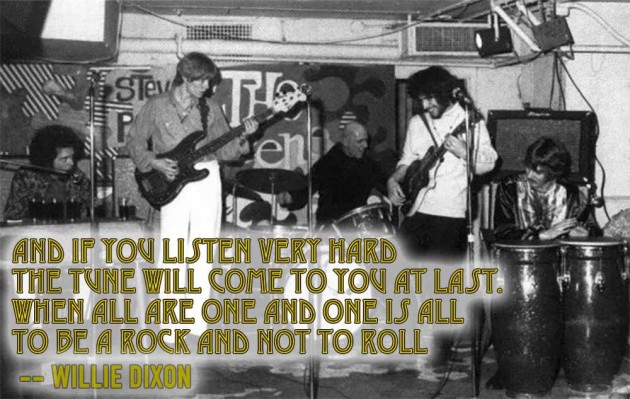 The lyric is from the closing stanza of one of the most popular rock songs ever (and one I loathe for its bloatiness). The photo is the band Spirit, who had a burst of popularity in the late 1960s (supposedly Jimi Hendrix opened for them at Woodstock).

Yet the opening of Led Zeppelin’s cash crop song (hundreds of millions made off of it) is rather similar to a much less popular song by Spirit called “Taurus”, and it’s still being sorted out. Heck, it’s even a game: 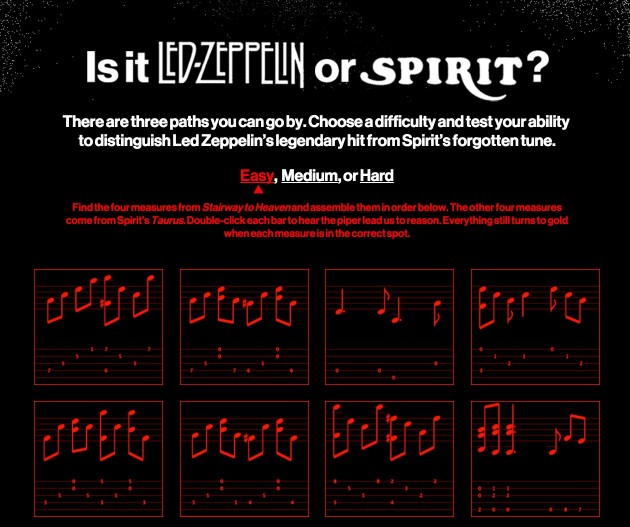 So that’s my two elements- I attributed the lyric to bluesman and songwriter virtuoso Willie Dixon— because quite a few of Led Zeppelin’s other songs have a lot of resemblance to ones by Dixon and others. (who never shared the royalties).

Side note, because of the magical way DS106 Assignment Bank works, I csan associate my response here with both assignments!

And so, the riff on the Daily Create by @Gorgon_Chest crossed with the assignment response by Terry Greene, now morphs into a new DS106 Assignment: 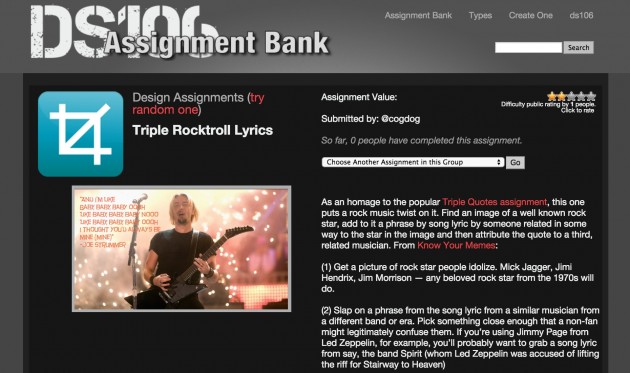 This does not happen in any tightly instructional designed LMS hosted assignment graded by robots.

This happens on the open web in DS106. What are you waiting for? Make some triple quote art, damnit.

Top / Featured Image: For the idea on riffing, I started with Google Image Search (licensed for reuse filter, the one buried 2 clicks away from the public interface, sigh) on “guitar riff”. The vast majority are the typical screen shot from a youtube video of “some bearded kid in his bedroom teaching you a rock song”

But just below the fold was this awesome photo of a yellow suited Elvis with a dog’s head, “elvis presley guitar mutt” a public domain image from pixabay.